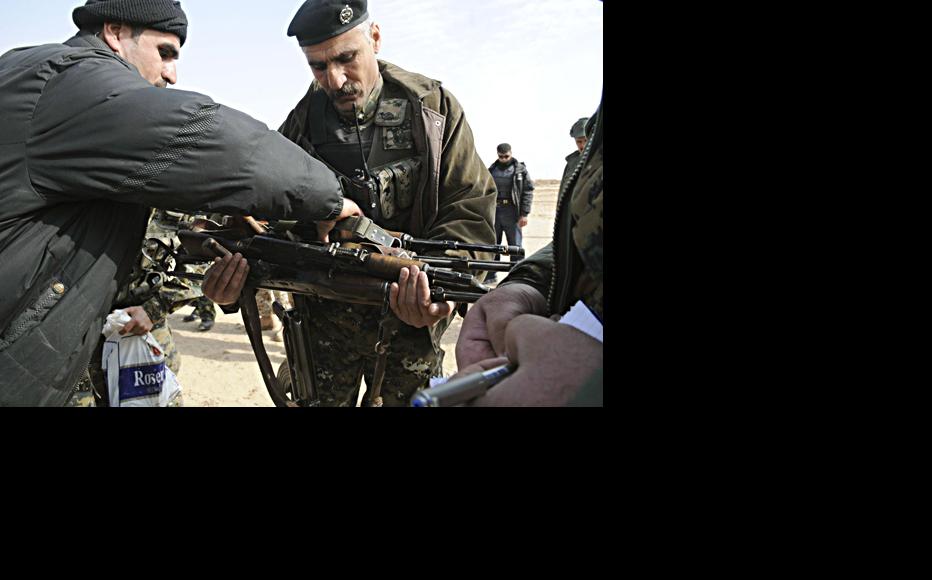 A revival in militia violence could severely test Iraq’s security forces. (Photo: Kamaran Najm - Metrography)
The link has been copied

Commanders from Iraq’s Sunni and Shia militias say they are ready to fight on behalf of their communities, highlighting concerns that a prolonged deadlock over forming a new government may give way to violence.

Although the militiamen said they had no desire to revive the sectarian war that nearly tore Iraq apart, they also cast doubt on the authorities’ ability to maintain security in the coming months.

In interviews with IWPR, they said they were poised to defend the interests of their sects at a time of unprecedented peril.

The spectre of sectarian strife is often invoked by Iraqi leaders as a warning to their rivals, and the latest statements may be seen by some as yet another act of political brinkmanship.

Nevertheless, the militia chiefs outline clearly the route to a possible conflict, reflecting fresh grievances and recent shifts in the balance of power.

Nearly three months after a nationwide election, a new government has yet to take office, largely because of a dispute over the inclusion of Iraqiya, a bloc backed by the Sunni minority.

Although Iraqiya won the most seats of any single bloc, a coalition of Shia Arab parties formed after the election has a parliamentary majority and looks set to head the next administration.

Leaders of a Sunni tribal militia, known as the Awakening or Sahwa, said the failure to represent their community in government could fuel violence.

The Sahwa, which includes many former insurgents, is credited with helping the United States military and Iraqi government forces curb al-Qaeda’s influence in Baghdad and the western province of Anbar.

Sahwa leaders complained that the government had fallen behind on promises to pay their men and provide them jobs.

They also accused Iran of empowering its Shia allies in Iraq and marginalising Sunni politicians – a move they warned would feed disaffection in their ranks and drive up recruitment for al-Qaeda.

A Sahwa chief told IWPR his group was ready to fight back if Sunnis were attacked by al-Qaeda, or by Shia militias.

Bombers linked to al-Qaeda regularly attack government and Shia targets, defying claims that the group has been disabled by the recent killing and capture of several senior leaders.

The bombings have prompted fears of retaliation by the Mahdi Army, a Shia militia commanded by the anti-American cleric Muqtada al-Sadr and blamed by Sunnis for thousands of sectarian killings.

The militia recently announced it was regrouping after a two-year ceasefire. Fighters wearing its distinctive black fatigues have been sighted on the streets of Shia neighbourhoods in Baghdad and southern Iraq for the first time since a government crackdown in 2008.

In early May, Sadr suggested his militiamen could help the security forces protect Shia holy sites. The government did not respond to the offer.

Sadr’s followers fared well in the election and have unprecedented power in the new Shia coalition. A leader from the Mahdi Army told IWPR he expected greater unrest in the months ahead but did not believe it would be linked to the exclusion of Sunnis from government, but rather on al-Qaeda and Iraq’s Arab neighbours.

The US is still expected to withdraw the bulk of its troops this summer, despite Iraq’s failure until now to form an inclusive government that Washington had hoped would provide a bulwark against instability.

Officials from the US military and the Baghdad government insist the Iraqi security forces are capable of tackling any threats of unrest in the coming months.

However, street interviews conducted by IWPR in Sunni and Shia neighbourhoods revealed similar anxieties, with residents taking their own measures to step up security amid fears of a fresh round of sectarian bloodletting.

“I am not optimistic about the security situation,” said Sheikh Jassim al-Dulaimi, an influential Sahwa commander from western Anbar province.

Dulaimi said his force was on “full alert”, with easy access to weapons and with its hierarchy and administrative structures still intact.

While acknowledging that taking up arms against the government was “unthinkable” at present, Dulaimi said this might change if the Sunnis continued to be excluded from politics, and if the Sahwa faced a fresh threat from al-Qaeda or the Mahdi Army.

“The Sunnis fought to end the sway of al-Qaeda, they made many sacrifices. It is just astonishing that they should come out of this [election] battle defeated,” he said.

“If the votes of Sunnis are ignored and the government is formed according to Iran’s interests, and if Sunnis are still denied funds and discriminated against, then they will take up arms against the state.”

Sunni leaders have repeatedly accused Iran of obstructing Iraqiya’s path to power while promoting the Shia parties as its proxies. The charge is denied by Iraq’s Shia parties and Tehran.

A Sahwa leader in Baghdad’s Adhamiyah district told IWPR his men were ready to take to the streets if chaos broke out because Iraqiya had been denied power.

“We will protect our community, we will do everything,” said the leader, asking to be identified by his nom de guerre, Abu Abdullah.

Both Sahwa leaders told IWPR their ranks would be vulnerable to revenge attacks and radicalisation by al-Qaeda if the next government continued to sideline the Sunnis.

“Al-Qaeda still has its eyes here, it can target us,” Abu Abdullah said. A Sahwa commander in Adhamiyah was killed earlier this year by suspected al-Qaeda insurgents.

Dulaimi said former al-Qaeda fighters who had placed their faith in the political process might once again take up the gun if Sunnis were denied political representation.

The Sahwa leaders would be their first targets, he said, because they had collaborated with the US.

Dulaimi said US forces should recognise the Sahwa as a reliable barrier against al-Qaeda, as well as against the growing influence of Shia militias backed by Iran.

Abu Abdullah echoed Dulaimi, saying Iran’s rising clout strengthened the case for the US to postpone its withdrawal.

“We don’t want the US to leave right now,” he said. “If they depart, there will be more violence targeting Sunnis.”

The Sahwa leaders’ stance towards the US was starkly at odds with the views of a Mahdi Army commander interviewed by IWPR in Baghdad.

“We would start fighting again if the Americans don’t withdraw their troops on schedule, among other things,” said the leader, asking to be identified as Abu Mujtaba.

“I think the security situation will deteriorate and al-Qaeda will escalate their cowardly attacks on the Shia.”

He rejected the view – put forward by the Sahwa leaders – that the exclusion of Sunnis from government could contribute to the violence. “There are foreign powers which want to destroy the Shia,” he said, accusing Iraq’s Arab neighbours of trying to destabilise the country.

Abu Mujtaba said the Mahdi Army had grown stronger since a government crackdown in 2008, as the organisation’s ranks had been purged of leaders disloyal to Sadr.

“Our force has not been disbanded. We are in a state of full readiness. If we felt the Shia were in danger, we would take up arms,” he said.

The leaders of the Sahwa and the Mahdi Army all argued that the men under their command were best qualified to defend their communities in the coming months.

“If there is violence in the neighbourhood, the government and the army is not as aware of it as we are,” Abu Abdullah said. “We will defend ourselves best – we know how to do that.”

Meanwhile, Abu Mujtaba said his organisation had long protected the Shia from Sunni groups. “Without us, the Shia would have been in serious danger,” he said.

Commanders of both the Sahwa and the Mahdi Army said their militias were not troubled by a lack of funds, as their members were motivated primarily by faith rather than financial gain.

“No one pays us salaries or allowances, we voluntarily belong to the Mahdi Army because we believe in it,” Abu Mujtaba said.

He added that many Mahdi Army fighters received their incomes from the government, as they were employed in ministries run by Sadr’s political movement.

Dulaimi, the Sahwa commander from Anbar, said the Sunnis would readily fight for their rights. “No one is thinking of funding. Everyone will volunteer. The faith supports them,” he said.

However, the Sahwa leaders accuse the government of neglecting its duty towards them.

Initially funded by the US, the Sunni militia members are now paid by Baghdad and have been promised jobs in ministries and security forces.

Its leaders say the wages their men receive are erratic and insufficient, while their promised integration into government structures has repeatedly been delayed.

“The government allowances are not enough to buy a suit or a mobile phone,” Dulaimi said. “It won’t make a significant difference even if they stopped paying us.”

Abu Abdullah said his men had not been paid for several months. “We have no support from the government,” he said. “They betrayed us.”

He acknowledged that payments for Sahwa members were currently some weeks overdue, but pointed out that his office had overcome many initial problems with budgets and bureaucracy when it took charge of the militia.

The file on the militia passed on to the Iraqi government had been in a “messy” condition, Chalabi said, citing as an example how many militiamen were collecting their salaries from different districts to those in which they were employed. There had also been some confusion over which ministry’s budget should be used to pay for the Sahwa, he added.

Some 92,000 Iraqis were initially working for the Sahwa nationwide. Of the 52,000 that were based in Baghdad, about 30,000 militiamen have since been given jobs in government ministries, according to figures supplied by Chalabi.

A further 9,000 have been integrated into the state’s security forces in the capital. Roughly 14,000 men remain as Sahwa members in Baghdad.

The total number of Sahwa members in the provinces is believed to be in the region of 40,000. Most have been promised jobs in ministries or the state security forces, but the pace of integration has been slower than in Baghdad.

Chalabi told IWPR these men were being kept in the Sahwa because the security forces had decided they were still needed to maintain order in the area.

“If they become government employees, security may deteriorate,” Chalabi said.

FEARS ON THE STREET

On the streets of Baghdad and Fallujah, citizens reflected each others’ concerns.

“We want a powerful security force. We don’t want to resort to outlaws to protect us,” Alia Hussein Hamodi, a civil servant in a Shia district of Baghdad, said.

“We were hoping for better when we participated in the election... Instead, it has intensified the superficial disputes between the parties.”

In Fallujah, Omar Salem, a teacher said the price of guns and ammunition had risen recently because of soaring demand. “Everyone is afraid. If the rights of Sunnis are not upheld, things will be bad. The Sunnis need assurances,” he said.

Talal Abdullah al-Askari, a retired military officer from Fallujah, said the price of real estate had also increased in the Sunni heartland of Anbar. “Sunnis are buying homes in Ramadi and Fallujah, which are a bit distant from Baghdad, in case the political talks fail,” he said.

Ahmed Khalil, a taxi driver who recently returned to Fallujah after living as a refugee abroad, said many more would flee if there was a fresh outbreak of sectarian fighting.

“Along with the extremists, only the poor will stay behind to fight. They can’t afford leave the country,” he said.