Number of reporters killed down, but Iraq still ranks poorly for press freedom.

Number of reporters killed down, but Iraq still ranks poorly for press freedom. 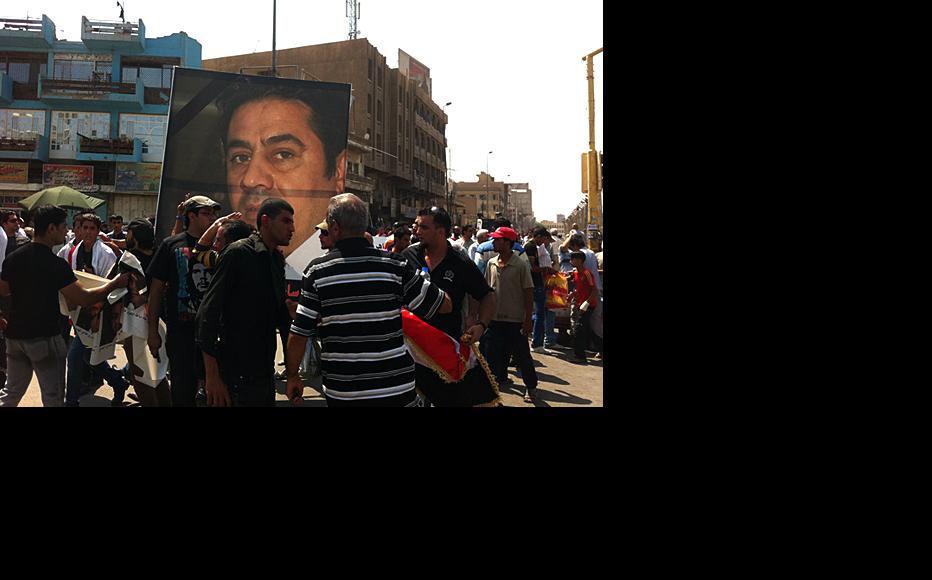 At a demonstration in Baghdad in September 2011, protestors hold up a picture of Hadi al-Mahdi, an Iraqi journalist shot dead at his home. (Photo: Khalid Waleed)
The link has been copied

Iraq’s two leading press advocacy groups have condemned ongoing media freedom violations in the country, but they disagree about who is principally to blame.

In an annual report issued to mark World Press Freedom Day on May 3, the Journalistic Freedom Observatory, JFO, a Baghdad-based advocacy organisation, said reporters faced serious government harassment including random arrest and a range of restrictions.

“Security forces treat a journalist holding a camera the same way as they deal with those they find with car bombs or unlicensed weapons,” the group said in a statement published on its website. “Many Iraqi journalists have been arrested by plainclothes members of military intelligence, using methods that resemble kidnapping rather than formal arrest.”

The Iraqi Journalists’ Syndicate, IJS, a media rights group affiliated with the government, took a different view. In its annual report, it said the greatest threats to media workers came from insurgent groups.

“Violence continued against journalists and media workers in Iraq, similar to previous years,” the report said, noting that four Iraqi journalists had been killed since May 2011 after being targeted by bombs, while others had been targeted in assassination attempts.

Asked whether the Iraq authoriteis had infringed media rights in the country, IJS secretary general Saadi al-Sabaa replied, “No, the government has not attacked or violated press freedoms.

JFO head Hadi Jalo Marei noted that the number of fatalities among journalists had fallen, but other violations were still of serious concern.

The JFO registered 31 cases of journalists being beaten by security forces, 65 arrests and detentions and 84 additional cases where the security forces had banned media coverage and filming.

Al-Sabaa countered such claims by saying, “What we have in Iraq is a situation where individuals, but not the authorities, behave badly towards journalists. For example, sometimes the bodyguards of officials beat or otherwise abuse journalists and media workers, but most of the time the violations are committed by terrorists, insurgents and unknown gunmen and criminals.”

In August 2011 the Iraqi parliament passed a media law which has been widely criticised by local and international rights groups who argue that it runs contrary to international standards of freedom of expression.

When it was in draft form, the bill was criticised because its provisions applied only to members of the IJS, a point amended in the final version so that a journalist is now defined as “any individual practicing a full-time journalism job”. But benefits such as pension rights and eligibility for compensation for injuries received in the line of work still only apply to those belonging to the IJS, which has some 10,000 members. This still excludes citizen journalists and bloggers, who have played an important role in building the modern Iraqi media.

Among the items criticised by the JFO in its report is another draft law on “information crimes” introduced by the government and now before parliament, which includes a clause stating that the “authorities can impose life imprisonment on anyone who establishes or manages a website if its content conflict with the public interest”.

Experts say the bill is worryingly ambiguous, and the penalties it envisages are overly stringent.

“Its wording is vague,” Kadhem al-Muqdadi, a media professor at Baghdad university, said. “Life imprisonment is an unrealistic sentence for an act like using the internet, even improperly. Whatever it means by the term ‘general [public] interest’ is ambiguous.”

Al-Sabaa rebuffed allegations that such internet legislation would allow the authorities to restrict freedom of expression.

“I disagree – we have the best legislation in Iraq; it protects the rights of journalists and media workers and guarantees freedom of expression,” he said.

Kamil Amin, a spokesman for the ministry of human rights also dismissed the charges, saying that authorities were seeking to uphold human rights and democratic principles.

“The media situation has improved in Iraq, and it continues to improve day by day. Why are certain organisations incapable of seeing this improvement?” he asked.

The legislative committee in charge of amending and drafting laws on media and freedom of expression also rejected the criticisms, arguing that Iraq had made good progress since the toppling of Saddam Hussein in 2003.

“Iraq has some of the world’s finest laws for protecting journalists,” Ali Shlah, head of the parliamentary committee on culture and media, said. “Few countries in the developing world have such freedom of press. Iraq is the leader. Those laws are the result of hard work by government, parliament and others, and we are proud to have such codes.”

International watchdogs still rank Iraq among the countries with the worst levels of press freedom. In its latest Press Freedom Index, media rights group Reporters Without Borders ranked Iraq 152nd out of 179 countries, down from its previous position at 130.