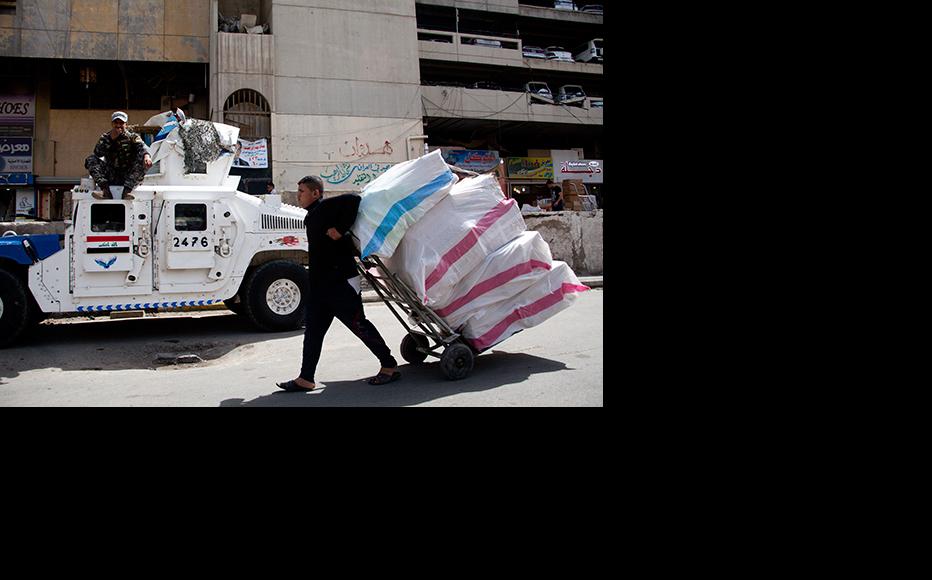 A young porter passes an Iraqi police vehicle in Baghdad, March 2013. (Photo: Ali Arkady/Metrography/Getty Images)
The link has been copied

Mohammed Abid is waiting for an email from the International Organisation for Migration (IOM) that will tell him when he and his family can leave Iraq.

He has spent four years awaiting what he calls the “day of salvation”. Meanwhile, he and his family live in daily fear that one of them will be killed in the random bomb explosions that go off all across the capital Baghdad.

“Leaving Iraq will be like a new birthday for me and all my family,” Mohammed Abid said. “I am not prepared to lose a family member to an explosion, and I live with this fear permanently.”

Three of his workmates have already left for the United State. He is hoping he will be able to follow them soon, taking all his family except his parents, who will move to southern Iraq where they can live close to relatives.

Mohammed Abid is one of thousands of Iraqis who have applied to emigrate under IOM procedures. The prospect of a better life and a better future is one motive for leaving, but the main one is just staying alive.

Eleven years after the US-led invasion that toppled Saddam Hussein’s goverment, Iraqis like Mohammad Abid are still enduring an never-ending cycle of violence. Car bombs, suicide bombings and other forms of violence are now part of the fabric of daily life.

The bloodshed peaked in 2007-08. Many analysts cite the 2006 attack on the Shia shrine at Samarra as a start-date for this wave of violence. Thousands of people were killed and “disappeared” during this period, while tens of thousands counted themselves lucky just to have lost money and property rather than their lives.

From the end of 2007, the level of violence dropped significantly as Prime Minister Nuri al-Maliki sent in the military to crush insurgent groups, starting with Basra in the south and moving up to Nineveh in the north.

After a lull, the bloodshed took off again in 2011. The rate of attacks spiraled especially in the last five months of 2013, with a spate of car bombings that killed hundreds. These attacks have taken place in every province, but are most concentrated in Shia-majority urban centres.

Casualty figures released by the United Nations Assistance Mission in Iraq show that 979 people were killed and another 1,902 injured in October alone. As has consistently been the case over the years, Shia neighbourhoods suffered the biggest proportion of casualties. The figures also included 236 casualties among the Iraqi security forces.

Many experts blame the political situation for the rise in violence.

Nabil Salim, a political science lecturer at Baghdad University, says the attacks are not random, but reflect a desire among various political groupings to gain the upper hand through intimidation.

“Disagreements among political parties about goals and Iraq’s paramount interests have led to the deterioration in security,” he said. “It looks like one side is orchestrating these explosions and working to shift the violence from place to place in order to keep the whole country unstable.”

Although Salim was not specific on which political factions he held responsible, he said foreign powers were also involved.

“Disagreements among Iraqi political groupings have allowed foreign countries to get involved in our domestic affairs, because each grouping is linked in one way or another to one of the foreign powers involved in the fighting,” Taha said.

Taha also pointed to failings in the management of Iraq’s security forces. At the moment, he said, units were spread out over diffuse areas without being armed with accurate intelligence about the plans, strategies and tactics of the insurgent groups they faced.

“Breaches of security will continue for a long time to come because the terrorists now have the initiative,” he said.

A third factor, Taha said, was poverty, which offered the insurgents a ready pool of unemployed recruits prepared to carry out attacks for money.

Interior ministry spokesman Brigadier-General Saad Maan pinpointed the situation in Syria as the source of trouble in Iraq, especially now that rebel groups in the former were suffering reverses.

“The insurgents are trying to open up a new front after the Syrian army regained control of many of the areas they formerly held,” he told IWPR. “That is why they are trying to make headway in Iraq.”

Despite this, Brig-Gen Maan remains optimistic that better security forces, improved intelligence-gathering, and increasing levels of public cooperation will combine to bring the violence to an end.