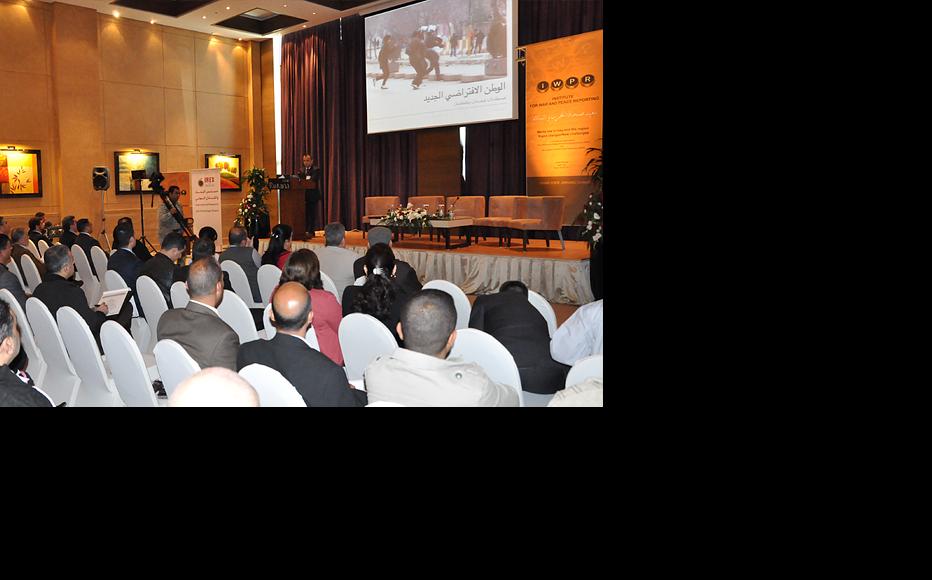 IWPR Iraq senior media adviser Hiwa Osman discusses the growing influence of citizen journalists in Iraq at the IWPR/IREX conference Media Law in Iraq and the Region: Rapid Changes/New Challenges, held March 4-5 in Erbil. Osman used a photo of a young man who recorded crackdowns on demonstrators in Sulaimaniyah to argue that all citizens - not just journalists - require the same protection and rights to information under the law. (Photo: Hazim al-Sharaa/IWPR) 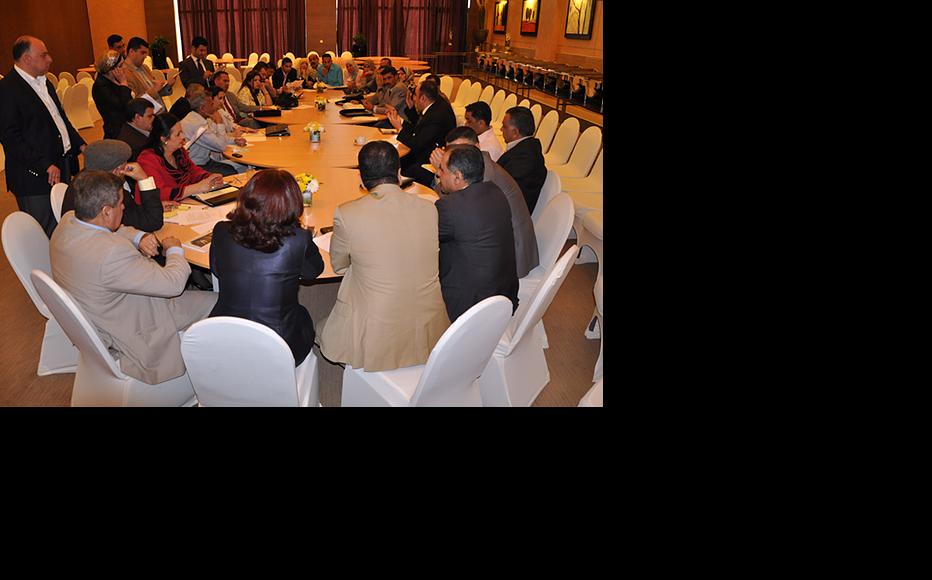 Dozens of participants debate the proposed Journalists Protection Law during a breakout session at the IWPR/IREX conference, Media Law in Iraq and the Region. Conference delegates recommended that parliament drastically amend and delay voting on the controversial legislation, instead prioritising laws that guarantee all citizens access to information. (Photo: Hazim al-Sharaa/IWPR)
The link has been copied

Participants at a conference organised by IWPR and the US-based NGO IREX on Iraqi media have urged parliament to amend controversial media legislation and abolish laws hindering the public’s right to access information.

In a vote at the end of the gathering, participants overwhelmingly recommended that lawmakers postpone voting on the draft Journalists’ Protection Law and make fundamental changes to the legislation.

The proposed law has been criticised for restricting access to information and compensation for injury to members of the Iraqi Journalists’ Syndicate, an independent trade union which receives federal government funding. Ordinary people and journalists who are not members of the syndicate are excluded from the provisions of the bill. Conference delegates argued that this amounted to curbing citizens’ rights.

The draft legislation was criticised for being outdated in light of the advent of citizen journalists and bloggers. Their emerging role as information providers in Iraq underscored the need for all citizens to enjoy equal protection under the law, delegates concluded.

They urged parliament to pass a constitutional amendment guaranteeing citizens the right of access to information and to abolish all laws, regulations and government orders limiting this right. Lawmakers should create a committee to develop a right to information law, participants recommended.

“These recommendations are a step in the right direction and embrace the values of the new Iraq,” IWPR Iraq chief-of-mission Ammar al-Shahbander said. “Guaranteeing access to information and freedom of expression for all Iraqis should be a central pillar of the new Iraq”.

Jacky Sutton, Iraq country director for IREX, said, “These recommendations are very important for civil society, media and the government in Iraq.”

The recommendations followed two days of expert panels and discussions on emerging challenges to freedom of expression and access to information for citizens and journalists in Iraq.

National and international media and legal experts maintained that access to information should be a guaranteed right for all Iraqis.

Several of the discussions focused on Iraq’s nationwide protests, including the government’s crackdown on demonstrators and the public’s growing frustration with poor transparency, services and corruption. A number of protesters have been killed and injured by security forces over the past few weeks, while the government has arrested demonstration organisers and imposed curfews during demonstrations in Baghdad.

Local and federal authorities said they would investigate the deaths and maintained that the restrictions on protests were due to security concerns.

Keynote speaker Haider Saeed, a research adviser with the Foundation for the Future in Baghdad, said the government’s crackdowns on the protests was unwarranted and evidence that Iraq “has not been able to create a different governance system to those that exist in the rest of the Middle East”.

Several experts argued that the government needed to ensure full transparency over financial and administrative affairs or risk facing a backlash from the public.

Transparency is especially critical for governments that are under extraordinary pressure to respond to citizens’ needs and can no longer control information, said Botan Osman, head of the Kurdistan Regional Government’s IT department.

“Transparency is not a choice,” he warned, adding that citizens were embracing new technology while governments were “lagging behind”.

Sutton noted that it was essential for the government, media and civil society “to manage this transparency so that it underpins democracy in Iraq”.

Tiare Rath is IWPR Iraq’s editorial manager. She is based in Baghdad.

Iraq
Journalism
Connect with us