Internationally isolated and inhibited by sanctions, Moscow finds in Tehran a diplomatic ally and a weapons supplier. 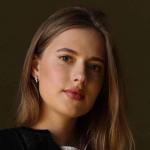 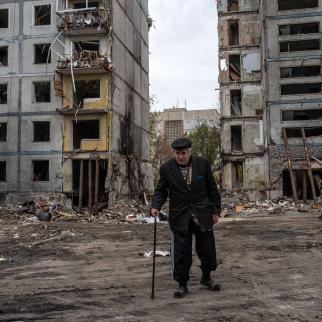 An elderly man walks by an apartment block that was destroyed by a Russian missile attack earlier in the month, on October 28, 2022 in Zaporizhzhia, Ukraine. © Carl Court/Getty Images

Ukraine: The Decisive Battle for Kherson

As forces approach the regional centre, they describe growing evidence of Russian atrocities.

Internationally isolated and inhibited by sanctions, Moscow finds in Tehran a diplomatic ally and a weapons supplier. 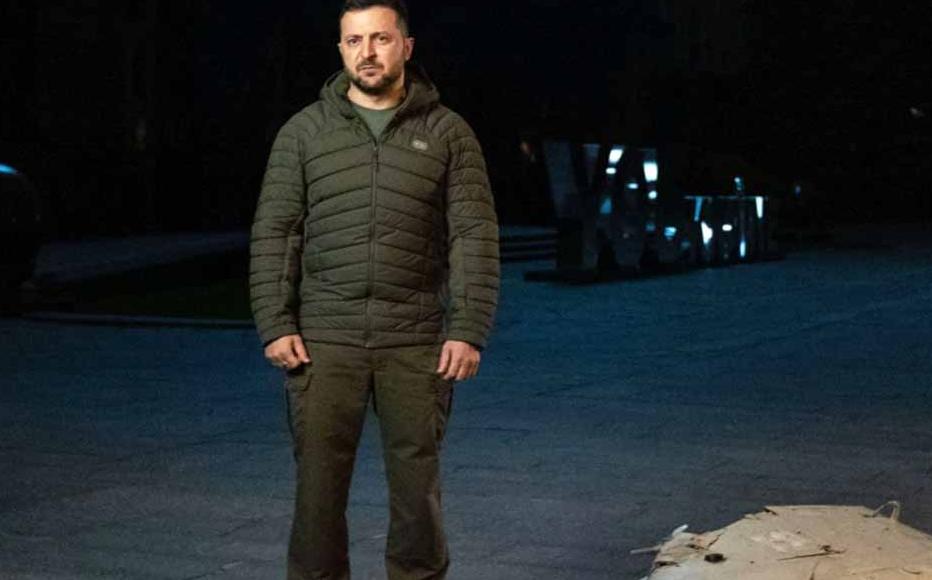 President of Ukraine Volodymyr Zelenskyi during an evening video address next to one of the downed Iranian-made Shahed-136 kamikaze drones, which Russia is using to attack Ukraine. Kyiv, October 27, 2022. © The Presidential Office of Ukraine/president.gov.ua
The link has been copied

Gaining pace in October, Shahed-136 and Shahed-131 models have been used to target civilian buildings and have damaged about a third of the country’s power plants. For months, Tehran denied that it had supplied Russia with drones, stressing its neutrality in the war. On November 5, Iran’s foreign minister for the first time acknowledged the sale of the equipment, while insisting that the transfer had happened before the full-scale invasion began.

According to President Volodymyr Zelensky, Moscow has ordered over 2,400 of the so-called “kamikaze drones,” as they are manufactured to explode on impact.

More than ten can be launched simultaneously from different directions, from the south and from Belarus in the north. They fly in so-called swarms close to the Dnipro river bed from where they are less visible to radars. Russia has combined this with the launch of cruise missiles from Russian territory, specifically from Kursk and Bryansk regions, and from the Black and Caspian Sea.

“The main goal is to oversaturate the Ukrainian air defence systems and create a ‘bulge’ of air targets so that the operators of the systems simply cannot cope with the load,” Oleksandr Musienko, head of the Centre for Military Legal Studies, told IWPR.

Yurii Hnat, spokesman of the Ukrainian army’s Air Force Command, said that Ukraine had taken down about 85 per cent of the drones, using aviation, anti-aircraft missiles and large-calibre machine guns as well as electronic warfare systems. In contrast, the success rate of shooting down conventional missiles stands at about 65 per cent.

However, the cost imbalance counts against Ukraine in this field. Each triangle-shaped Shahed-136 costs up to 30,000 US dollars, making it cost-effective for the Russians to send many at once, while Ukrainians forces use far more expensive air defence missiles to shoot them down.

The Kremlin's international isolation has prompted it to seek new allies. Tight sanctions significantly limit the import substitutions of key goods, including weapons parts, which has affected the Russian army’s performance. Since February 24, Moscow has used thousands of expensive ballistic and cruise missiles at a pace that its military industry struggles to sustain.

Ivan Kyrychevskyi, a military analyst with the Kyiv-based consulting company Defense Express, said this would suit both parties.

“Tehran, like Moscow, is in international isolation, has its political ambitions in the near and Middle East region, and is also in confrontation with the USA,” he continued, noting that Russia had been forced to relocate its flotilla in the Caspian Sea to focus its resources in the Black Sea.

“Having surrendered positions in the [Caspian] region, Moscow has a new ally in Tehran,” Kyrychevskyi said.

Ties may have deepened, but they are not new. For years Moscow and Tehran have worked together on nuclear energy, weapons and measures to bypass UN security council sanctions against Iran, including those that Moscow had voted for.

“Intelligence information indicates that Moscow has been supplying weapons to Tehran since the 2000s, including missiles for air defence systems and more,” Musienko said. “Now the Russian Federation has become the main buyer of Iranian weapons.”

Both countries are interested in forming an axis of states in confrontation with the West. In his opening remarks at the Eastern Economic Forum in Vladivostok, Putin challenged “the West's sanctions fever, with its brazen, aggressive attempt to impose models of behaviour on other countries, to deprive them of their sovereignty and subordinate them to their will”.

Ukraine is working intensively to effectively counter such small-sized air targets. Western partners have been supplying critical air defence systems, including highly sensitive radars and jamming equipment which interrupts the communication between the drone and the satellites on which it is oriented. Kyiv has asked Washington to supply mobile air defence systems known as C-RAMs (Counter Rockets Artillery and Mortar) which feature a built-in radar that tracks incoming threats and a giant rapid-fire gun to shoot them down.

Zelensky said that Russia has already purchased approximately 2,400 Shahed-136 and Shahed 131 models, and is due to receive also Arash-2, the world’s longest range suicide drone as well as the short-range Fateh-110 and Zolfaghar ballistic missiles.

“The increased weapon supply from Tehran certainly signals Russia’s shortage of resources, in terms of personnel, technology and management,” Kyrychevskyi noted. “However, these [ballistic] missiles are just as dangerous as the S-300 or the Iskander.”

Moscow, he added, now hardly uses the Iskander, possibly to save money as each costs about ten million dollars.

Tehran and Moscow can also negotiate for the transfer of additional weapons, including the Shahab-2 ballistic missile with a firing range of up to 500 kilometres, which is a copy of the Soviet R-17 for the Elbrus missile complex, better known as the Scud.

Analysts warn against underestimating the risks this alliance poses. For Ukraine, it means a sharp increase in military threats and strikes on facilities located deep in the rear, especially critical infrastructure. For the West, this means further confrontation with the Russian Federation, which with the help of Iran will be able to bypass the consequences of some sanctions. Analysis of the drones showed that 76 of their components were sourced from 14 US-based companies, despite Washington sanctions against Teheran.

“It is also important for the relevant financial authorities to investigate asset tracing and money laundering to track the supply chains of parts and components that Iran may have purchased for production and ‘hit’ the supply chain accordingly,” he said, adding that Iran’s international isolation should increase in parallel with the “faster transfer of all possible air defence equipment to Ukraine”.