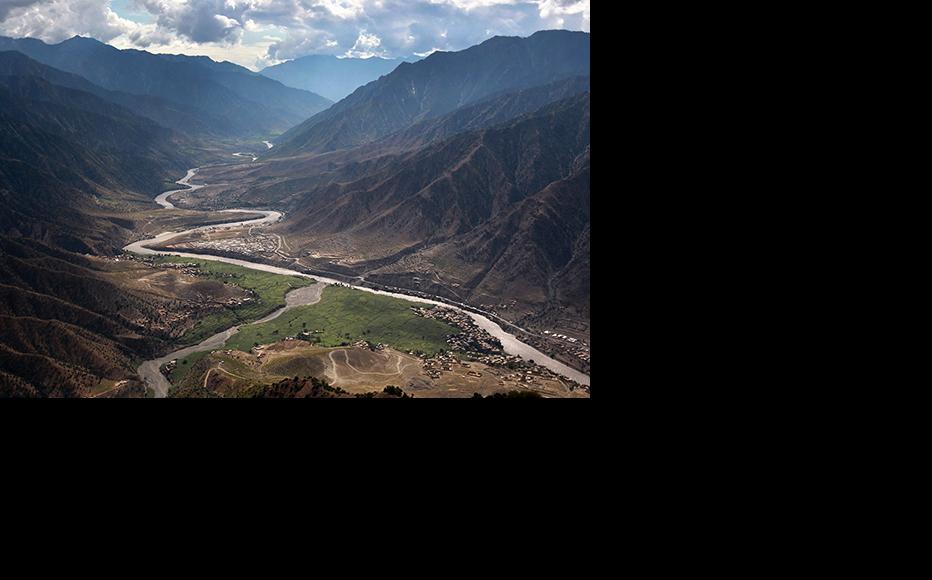 The Kunar river winds through a valley in the northeastern province. (Photo: John Moore/Getty Images)
The link has been copied

Large swathes of forest in the northeastern Afghan province of Kunar are being destroyed by illegal logging, with local authorities unable to protect the rich natural resource.

Huge areas of both spruce and pine are being cut down and the timber then sold over the border in Pakistan. It is believed that some of these funds are also channeled to insurgent groups.

Local authorities are aware of the problem but say that a lack of government control in the districts in question means it is hard for them to take any action. They say appeals to central government for assistance have gone unanswered, meaning vast quantities of valuable timber continues to be smuggled out of the country.

Local people say that they have little choice but to participate in illegal logging. Abdul Khaliq, 45, told IWPR that he worked cutting down mainly pine trees in the remote district of Dara-I-Pech.

He added he was reluctant to continue in his job given suspicions over who was profiting from the logging, but that he had no other means of supporting his family.

“We only cut down pine trees because otherwise we’d be unemployed,” he said.

“I’m well aware that other people are smuggling the timber out of the country to sell on but what can I do?

“I only earn seven dollars a day in wages but it’s clear that mafia, insurgent groups and even some government officials are earning far more.”

According to figures from the department of agriculture, irrigation and livestock, Kunar province once had around 324,000 hectares of forests, roughly five per cent of Afghanistan’s total.

But more than 30 years of conflict have devastated this natural resource. Across Afghanistan, research from the United Nations Environment Programme suggesting as much as half of the entire forest cover has now been destroyed.

Kunar resident Zia Rahman said that for many years much of the pine forest in Chapa Dara district had been protected from deforestation by a tribal agreement.

But he added that since the Taleban began to make serious advances into the province last year, timber was being felled at an alarming rate.

“Initially local people tried to opposed Taleban efforts to log the area,” he said. “But it soon became clear we couldn’t make them stop and now the trees are openly cut down. Not even the government appears to be able to do anything.”

IWPR approached Ghani Musamim, a spokesman for Kunar’s provincial governor, to establish what was being done to stem the tide of illegal logging.

While he agreed some areas of the province were outside government control, he denied the problem was being ignored completely.

Musamim acknowledged that smugglers were using mules to carry timber over mountainous routes into neighbouring Nangarhar and Laghman provinces - as well as into Pakistan - but said that road routes were being closely monitored.

“Unlike before, trucks loaded with wood that is clearly destined for sale in Pakistan cannot travel freely on our highways,” he insisted. “They are stopped [by police] and prevented from continuing.

“But in respect of forested areas located in districts controlled by insurgents, it’s a problem that’s difficult for us to counter. It’s hard to block smuggling in those areas.”

Musamim said that a government decision to allow a certain number of trees to be felled each year for the manufacture of doors, tables and wardrobes had been reversed after opportunists were found to be exceeding quotas.

As a result, many factories had gone out of business leading to hundreds of jobs losses in an area heavily reliant on timber processing.

Faryad Durrani, the head of a carpenters’ union in Kunar, said only around 150 or so furniture factories remained in operation in the provincial capital Asadabad.

He said that craftsmen were banned from felling fresh timber and were instead relying on rapidly dwindling stocks from previous years that were now commanding extremely high prices.

He added, “Previously, our goods were exported all around the country including Nangarhar, Laghman and even Kabul. But now our products can’t be sold to other provinces and so business has been severely limited.”

IWPR also found that deforestation was having a major impact on the province’s wildlife.

He said Kunar’s police chief and the provincial governor were both aware of the problem and were doing everything they could to address it.

He added, “Not only has the illegal logging caused mud slides but many wild animals have either disappeared or migrated to neighbouring provinces.”

Mohammad Safi, a member of Kunar’s provincial council, said he believed that both the Taleban and armed groups affiliated to Islamic State had seized forestry in Chapa Dara and Dara-I-Pech districts and were felling hundreds of trees every day.

He condemned their behaviour, pointing out that the woodland was a precious resource that locals could ill-afford to lose.

He said, “I know of an IS commander who has just started cutting down trees in Nangalam in Dara-I-Pech district and this is how he is able to financially support his men.

“The problem has been discussed with the police chief, the local governor, the provincial council and local residents, but so far no action has been taken.”

Juma Gul Himat, Kunar’s police chief, told IWPR that a number of soldiers and police officers - including his own deputy - had been accused of involvement in lumber smuggling.

He said that the deputy police chief had been arrested and was being investigated, and emphasised that no one would be above the law.

“In the last few months 75 people have been arrested on charges of timber smuggling,” he said, adding that “anyone found violating the law has been arrested and gone on to face legal action”.

He added, “So far we’ve received around 70 civilian cases. The cases involving military officials have been sent to the military’s prosecution office, including that of Kunar’s own deputy chief of police.”

Senior figures from the department of agriculture, irrigation and livestock said they had asked permission from central government to form an armed militia made up of civilians to patrol and protect areas under threat, but they had not yet received a response.

A spokesman said, “It’s unsurprising that insurgents take advantage of areas outside of government control and there’s no doubt they’re able to help fund their war with profits from both deforestation and mining.

“We have shared this issue with central government but we don’t currently have the executive authority needed to take action.”

For their part, local residents in Kunar say that with government support they would be ready to help protect the forests themselves.

Usman, a tribal elder, said, “If the government doesn’t have the ability to form a special security unit then they should look to resolve this issue with our cooperation.

“If we’re given weapons and the right authority, we can defend this national resource.”