"I Saw Nothing" – Ex-Official at Srebrenica

"I Saw Nothing" – Ex-Official at Srebrenica 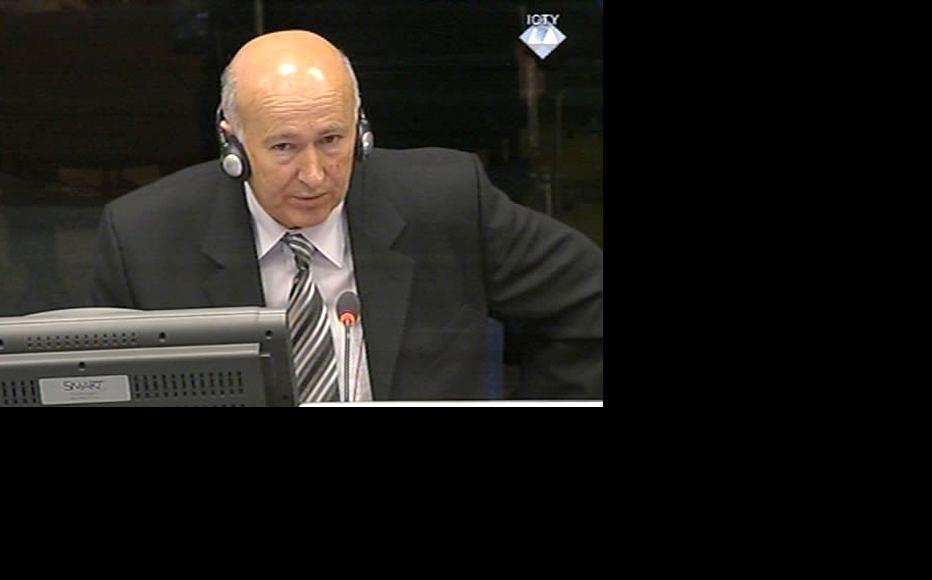 Dane Katanic appeared for the defence in Karadzic’s trial at the ICTY. (Photo: ICTY)
The link has been copied

A former Bosnian Serb official testified this week that his political leader Radovan Karadzic never mentioned the killing of Bosnian Muslims during meetings in the days after the takeover of Srebrenica in July 1995.

Dane Katanic, who appeared for the defence in Karadzic’s trial, was chairman of the Skelani municipality during the war.

Previously part of Srebrenica municipality, Skelani was made into a separate local administration covering Serb-majority areas and run by the Bosnian Serb authorities.

Katanic said he had two or three meetings with Karadzic after Bosnian Serb forces captured the Srebrenica enclave on July 11, 1995. He said the first meeting took place that day, and he was “almost certain” the second was on July 14.

"But what I also do remember, and with absolute certainty, is that President Karadzic never mentioned any murders or killings or crimes against Muslims during that time,” he said.

Karadzic, the president of Bosnia's Republika Srpska from 1992 to 1996, is accused of planning and overseeing the massacre of more than 7,000 Bosnian Muslim men and boys at Srebrenica in July 1995, as well as the 44-month siege of Sarajevo that left nearly 12,000 people dead.

The indictment alleges that he was responsible for crimes of genocide, persecution, extermination, murder and forcible transfer which "contributed to achieving the objective of the permanent removal of Bosnian Muslims and Bosnian Croats from Bosnian Serb-claimed territory".

Karadzic represents himself in the courtroom.

The witness said the days following the Srebrenica takeover were “a very hard time.”

“I remember that the meetings I had with President Karadzic at the time were very intense and detailed,” he said.

During the first meeting on July 11, Katanic said he wanted to personally discuss with Karadzic any "potential threats" to Skelani and its population during and after the Srebrenica operation.

"Personally, we were worried that something might happen, some attacks, and there was a large concentration of civilians in Skelani,” Katanic explained.

He added that they also discussed “administrative” issues, such as whether “Skelani and Srebrenica should be one municipality or two”.

The second meeting centred around Miroslav Deronjic, who was branch chairman of Karadzic’s Serbian Democratic Party in Bratunac, a municipality north of Srebrenica and Skelani.

In 2003, Deronjic pleaded guilty to one count of persecution for ordering an attack on the village of Glogova in Bratunac that left 65 Bosnian Muslim civilians dead. Deronjic died in 2007 while serving his ten-year sentence in Sweden.

"Deronjic was an old acquaintance, but I didn't like him, and was opposed to him becoming the new civilian responsible for Srebrenica," Katanic told the court. “I thought he was the wrong man for the job.”

The witness once again stressed that “there was no information about any murders of prisoners from Srebrenica, during any of the meetings [Karadzic and I] had”.

During the prosecution’s cross-examination, Katanic said that Skelani was "ultimately a peaceful place". He said he was unaware that Milenko Trifunovic, commander of a special operations unit from the village, was found guilty of genocide in Sarajevo in 2009.

Katanic was also asked about a meeting he had with Deronjic in Bratunac on July 13, 1995.

"Yes, I travelled to Bratunac, and I saw that there [were] buses which were taking people, obviously Muslims, taking them some place, but I didn't really look with much detail," he said.

Katanic added that he was "by nature not a curious man”.

"There was much going on, there was noise, people, and I didn't quite want to look where I wasn't supposed to be looking,” he said.

Asked whether he could confirm having seen thousands of Bosnian Muslim men in Bratunac that day, where they were kept overnight before being murdered on July 14, the witness answered that he had "no idea, but there were not thousands of men there”.

“I can't really believe that,” he added.

The witness also said he knew nothing about the shooting of some 1,000 Muslim men in the nearby village of Kravica. However, he admitted that he "did hear about some riots and problems going on there” which were “caused by the killing of a Serb soldier.”

Katanic also claimed not to have seen any corpses in Kravica while on his way to see Karadzic on July 14.

"I saw nothing, I spoke of nothing with Karadzic, there was nothing to be seen."

Another defence witness remembered having seen a pile of corpses in the village, but Katanic said he had definitely "not seen anything".

To close the cross-examination, the prosecution asked Katanic to identify himself in a photo taken at a support rally for Karadzic and Bosnian Serb army general Ratko Mladic in 1996, when both men were fugitives. A child standing next to Katanic in the photo held a sign saying "I too am a war criminal".

"Oh, that is me in the picture", Katanic said, sounding surprised. However, he was unable to remember ever having taken part in "such an event".