Freezing cold weather has added to hardships facing some of the country’s most vulnerable people.

Freezing cold weather has added to hardships facing some of the country’s most vulnerable people. 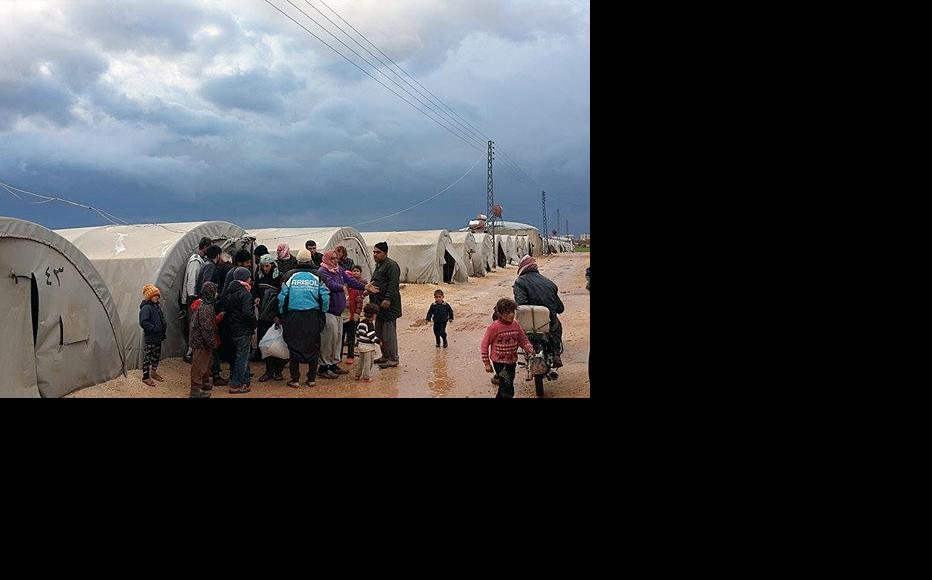 Aid distribution in a camp for internally displaced persons. (Photo: Ahmad al-Salim)
The link has been copied

Aid convoys aimed at helping tens of thousands of people have been dispatched by the Sheikh Thani bin Abdullah Foundation for Humanitarian Services (RAF), a Qatari charity, and the Turkish Humanitarian Relief Foundation.

RAF’s latest million-dollar Goodwill Ambassadors’ convoy consists of 48 trucks loaded with food, flour, winter clothing and dates. The consignment is intended to help 50,000 refugees plus others citizens living in northern Syria – Aleppo and the surrounding countryside, areas around Idlib and Hama, and the coast. More than 200 displaced families on the Turkish border will also receive aid and food packages.

Local distribution is being carried out by the Sham Islamic Body. Its relief coordinator in Idlib, Hamza Hazeh, says conditions have been especially difficult this winter, particularly in the camps for internally displaced people.

Hazeh said he hoped that other charity organisations might now follow suit and increase aid deliveries to Syrians living in abject conditions.

“We began by preparing packages of winter clothes and shoes, some food and cleaning supplies, and distributing them immediately among the worst affected and neediest in the refugee camps,” he said. “We began by delivering in Marat al-Numan and Jarjanaz in the south of Idlib province, and in Badama in the west. We will continue until we’ve distributed aid in all parts of the province.”

Munhal al-Khatib, who is supervising the allocation of aid in the villages and camps of Idlib province, told Damascus Bureau how the harsh winter had affected vulnerable citizens.

“After the extreme cold and frost, we wanted to act as quickly as possible to alleviate the suffering of the displaced. We handed out winter blankets and bedspreads, as well as water purification tablets and cleaning supplies,” he said. “We saw an immense amount of suffering due to the severe cold. There were large numbers of women and children shivering from the cold as we distributed aid at one of the camps.

“We are hoping that other relief organisations and charities will turn their attention to the displaced people in camps, in particular. The winter this year was long and unforgiving, and the suffering is only increasing.”

The United Nations children’s agency UNICEF has partnered with the Sham Islamic Body to distribute cleaning supplies and drinking water to many areas in Idlib province, particularly to the camps where people are suffering from skin diseases due to contaminated water and burst sewer pipes.

Yassin al-Shartah, who came here from a government-controlled area, said he was happy with the aid package he received.

“There were some thick blankets inside,” he said, “as well as shoes and cold-weather clothes for my small children, and some important food staples which we desperately needed, especially in winter when it’s impossible to find work.”

Shartah expressed home that humanitarian aid groups would send heaters and fuel, as a number of children had died from the cold.

“We are in dire need of fuel, and most Syrians are so hard hit by poverty and war that they can’t afford to buy any,” he said.

Um Ahmad and her children live in a refugee camp on the fringes of Jarjanaz, having been displaced from their village in Abu Duhur in the east of Idlib province.

She says the cold weather poses a grave threat to her family’s health, as their house is unfit for human habitation. The warm clothing handed out by volunteers has helped, but she is still worried about the lack of heating.

“This winter was extremely cold,” Um Ahmad said. “I have six children and there are no clothes for them except for what I’ve been able to get from some charitable people. We’d like to thank them for their donations of cleaning supplies and food during these difficult times. And we hope they will make even greater efforts on our behalf.”

Dozens of children were given shoes and winter jackets at a small event which coordinators of the relief campaign held as a way of making other organisations more aware of the need for additional aid.

Reem, a seventh grade school pupil who received shoes, a winter coat, gloves and a hat, was happy with her new clothes.

“It’s very cold in the mornings when we have to go to school,” she said. “My old coat was very worn, and now I can wear new nice clothes in front of my friends. With these gloves, I can even play outside when it’s snowing.”

“The campaign won’t stop here,” Hazeh said. “We will continue to help those who are affected and in need, and displaced people in particular, because of what they are exposed to during the winter. There are Goodwill Ambassadors’ convoys slated to arrive very soon, carrying hundreds of ton of food aid. We hope these campaigns will help alleviate some of the catastrophic suffering that people are experiencing.”

Syria
Conflict, Health
Connect with us