Some suspect the meeting was orchestrated by Karzai supporters who want to prolong his term.

Some suspect the meeting was orchestrated by Karzai supporters who want to prolong his term. 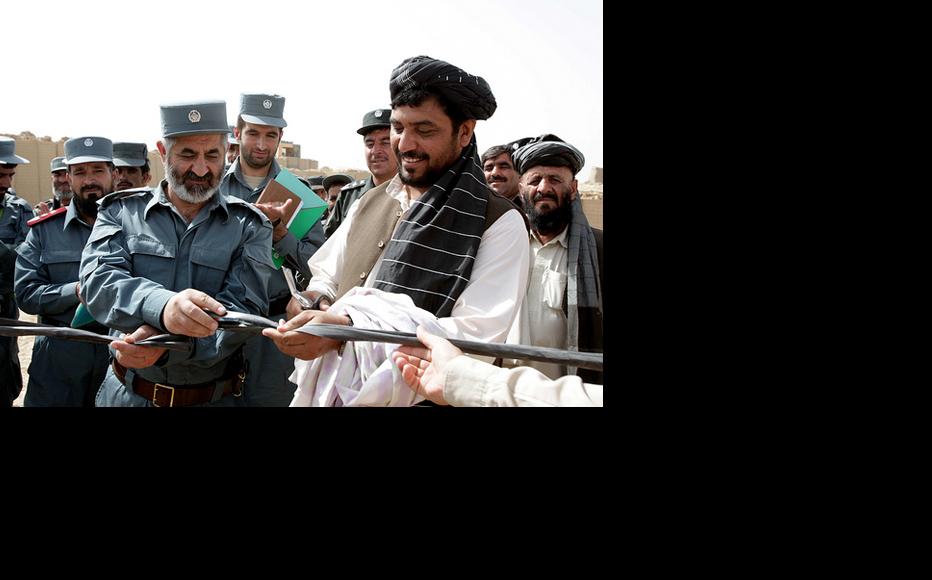 Opening a new police station in Marjah, Helmand province, in September 2010. Some residents say the province is still too dangerous for next year’s presidential election to go ahead. (Photo: Lance Cpl. Paige J. Bray/US Marines/Isafmedia/Flickr)
The link has been copied

Critics of the Afghan government have warned that concerns about security in restive provinces like Helmand should not be used as a reason to avoid the presidential election due in April 2014.

A public meeting organised by tribal elders and attended by hundreds of people in Helmand’s provincial centre Lashkar Gah last month heard demands for the election to be postponed, as well as for more reconstruction work, and for the constitution and electoral law to be reviewed at a “loya jirga” or traditional assembly.

Jan Mohammad Khan, a tribal leader who attended the event, said that the government needed to tackle the security problems in Pashtun areas before any election could be of any benefit.

“We don’t want elections in which our [insurgent] opponents cut off noses, fingers and ears, as happened to some people in previous elections,” he said. “We would ask Karzai to call a loya jirga and postpone the election until security is ensured in the western and southern provinces.”

Other participants pointed out that the Taleban had already threatened people with severe consequences if they dared to vote.

“The Taleban are saying that if anyone participates in the election, they will kill him,” said Maulavi Mehr Del, another local leader. “So is anyone going to want to take part in elections in a situation like this? We don’t want hundreds of Afghans being killed or disabled just in order to elect a president.”

Ataullah Khan, another participant in the Helmand gathering, agreed that the Taleban were planning to derail the election, which will come at a time when NATO troops leave Afghanistan and the national security forces are left to cope largely on their own.

“They are always telling people that they’re going to turn the situation round in 2014, and that they want to intensify their attacks ahead of the election so that it doesn’t take place,” Ataullah Khan said, adding that the Taleban were calling on true Muslims to boycott the election so that an Islamic government could be established to replace what they called an “American puppet” administration in Kabul.

Afghan insurgents have stepped up their attacks recently, with a strike last week targeting NATO contractors in Kabul. Another suicide attack last month took place near the presidential palace and the CIA office in the capital.

The Afghan interior ministry reports that police casualties have increased by 22 per cent in the past three months, attributing this to the security handover process and inadequate levels of equipment amid intensifying attacks by the insurgents.

Despite the arguments that holding an election so soon is untenable, some commentators accuse President Hamed Karzai of exploiting the situation either to extend his presidential term, or to give himself time to install a chosen successor. Karzai, who is not eligible to stand again, has repeatedly denied both allegations.

Fazel Rahman Oria, spokesman for the opposition National Coalition, said security was an essential prerequisite for elections, and noted that some areas were still dangerous. At the same time, he pointed out that the security services had promised to ensure calm during the election, and argued that meetings like the one in Helmand were orchestrated by Karzai supporters.

“There is no doubt that some districts of Helmand are unsafe, but nor is there any doubt that Karzai’s team is organising activities like this,” he added. “Whatever happens, Karzai and his team have to step aside.... If the security agencies say they’re unable to guarantee ensure security for the election, that still doesn’t mean Karzai should stay in power.”

Habiba Sadat, a member of parliament from Helmand, agreed that the gathering did not accurately represent the wishes of all the province’s citizens, and said she suspected Karzai’s allies were behind it.

“The law must be implemented,” she said. “The law accepts no excuses. An election must be held, and the person who is elected by an absolute majority must come to power.”

Sadat accepted that security problems continued in some northern districts of Helmand, but she maintained this would not pose a serious threat to the presidential election.

Helmand officials told IWPR that it would be possible to hold the election all over the province, with only a few exceptions.

“There are no problems across Helmand, except in Baghran and Dishu,” provincial security chief Colonel Gholam Rabbani said. “If people say there’s no security and that the election should be delayed, then that’s just their opinion.”

Rabbani said election officials had not faced any obstacles so far as they carried out preparatory work in Helmand.

“Our forces – the national army, police and security service – are working together,” he added. “We have very good plans for the elections…. We can also assure the public that elections will be held in the districts.”

Abdul Hadi Dawari, who heads the Helmand office of the Independent Election Commission, said responsibility for security considerations lay with the commission’s Kabul headquarters, which liaised with the police and army.

“We work based on their instructions, but the security forces have assured us that there are no problems all around Afghanistan,” he said.

Dawari said 219 election offices had been opened in Helmand province, with the exception of those areas where the government had no authority, such as Taleban-controlled Baghran district.

Despite such assurances, some Helmand residents maintain that their home areas are too dangerous for polls to go ahead.

Sayed Rasul, a resident of Sangin district, said, “We can’t carry our identity cards in our pockets in our own areas. The Taleban have warned us that they will punish people if they find identity cards, voting cards and other government documents on them, and that people must distance themselves from the government.

“A while ago, I talked to a Taleban member,” Rasul continued. “I asked him why they were preventing people from having identity cards, since these show Afghans’ identity. He said that this was true, but that no document from this government was credible.”

Gol Ahmad Ehsan is an IWPR-trained reporter in Helmand province.