Picturesque Caucasian country draws more visitors than ever, but service levels remain patchy and infrastructure is still being put in place.

Picturesque Caucasian country draws more visitors than ever, but service levels remain patchy and infrastructure is still being put in place. 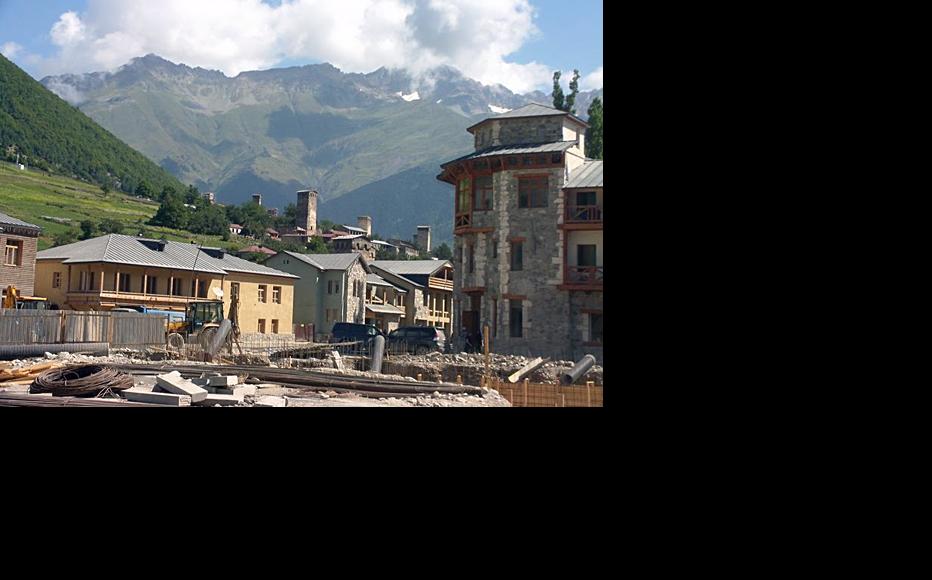 Tourists visiting the town of Mestia will see plenty of building work going on. (Photo: Dato Kvavadze)
The link has been copied

Georgia’s National Tourism Agency says 45 per cent more tourists have visited the country this year than in 2010, with numbers topping two million for the first time.

Groups of foreigners with rucksacks and cameras can now been seen in almost every town and village, supporting the tourist agency’s claims. There are more flights to the airport in the port city of Batumi, which is now served by 11 air companies. Trains from Armenia to Georgia’s Black Sea coast have had two extra carriages added on, and tickets are still selling out.

However, some visitors complain of spiralling prices and poor levels of service. Meanwhile, Georgians themselves are ever more likely to head abroad for their holidays.

“If you look at opinion polls, view internet forums where tourists swap experiences, or ask the owners of small hotels or the tourists themselves, you will see that the situation is not so uplifting,” he said.

Impressed by a television advert saying “Discover Georgia”, Hedva, a 32-year from Tel Aviv, paid her first visit to the country this summer.

With a group of three friends, she travelled from the port city of Batumi up to the mountainous region of Svaneti – a route recommended by President Mikheil Saakashvili.

“I read the president’s words on the internet where he said you could swim in the waters of the Black Sea and look at Batumi and then be skiing in Svaneti within three hours. That’s why we came,” she said.

On arriving, Hedva found that the tourist industry had not quite caught up with the glossy TV ads.

“Holidaying here was a bit expensive and uncomfortable this year,” she said. “Batumi was covered in dust as there’s building work going on everywhere. The road to Mestia in Svaneti hasn’t been completed so it took us six hours instead of three, breathing in dust rather than fresh air the whole way. Mestia is under reconstruction right now. There are hardly any toilets and those that do exist are so dirty that you can’t go in.”

Overall, she said, “Prices, particularly in restaurants, are catastrophic, hotels are expensive and the service is poor. It would have been better if we’d discovered Georgia next year.”

Beka Jakeli, deputy head of the National Tourism Agency, acknowledged that the rush to build up the tourist infrastructure had inconvenienced this year’s tourists, but he said it would benefit future visitors.

On other concerns, he said, “Our agency is running training schemes for the staff of small and medium-sized tourist businesses so as to improve the quality of service…. As for high prices, these are driven by increased demand created by rising numbers of tourists.”

The company Global Star, which awards star ratings for tourist facilities, looked at 20 hotels and resorts on the Black Sea coast at the request of the local government of Ajara region. It gave only one hotel a three-star rating, while two others got two stars.

According to Ajara regional governor Levan Varshalomidze, “A Sheraton opened in Batumi last year, and a Radisson this year. Next year, a Hilton, a Kempinski and a Holiday Inn will open. In two or three years time, we will have a minimum of ten chain-owned hotels to meet the tourist demand.”

But industry experts question whether expensive hotels are the right solution since the kind of people who visit Georgia – typically residents of other former Soviet states – frequently do not have lots of money to spend.

The largest contingent this year was from neighbouring Azerbaijan. Shovgi Mehmedzade of the Azerbaijani embassy in Tbilisi said four out of five tourists from his country wanted more than a cheap budget holiday, but preferred to stay in small hotels with good service.

“Sadly, the quality of service in Georgia is currently deficient,” he said, adding that Azerbaijani tourists found that hotels and restaurants generally demanded cash and would not accept credit cards.

Meanwhile, some owners of small hotels fear the general rise in prices is driving away domestic tourists who often form the bedrock of their trade.

Vova Gabunia, who owns a hotel on the Black Sea coast, said he lost money this year despite the influx of tourists.

“Most of my clients used to be Georgians,” he explained. “This year, I rang up some of my regulars to ask when they were planning to come, but they were all on holiday in Turkey. Half rooms are empty. The rest are occupied by tourists from Armenia and Azerbaijan, and that’s only because I dropped my prices.”

Meanwhile, Hedva and her friends headed back to Israel earlier than they had planned.

“We wanted to spend 15 days here, but we’re leaving early. Our money has run out,” she said. “It was raining in Batumi and we got fed up of the dust and the sound of building work right beside our hotel. But we’re happy all the same. I’ll tell my friends to come to Georgia, too.”

Nino Chanturia works for the Georgian Association of Regional Broadcasters.