With the death of Osama bin Laden in early May and growing concerns among Americans about a faltering economy and growing national debt, there is a growing clamour for a rapid withdrawal of United States troops from Afghanistan.

With the death of Osama bin Laden in early May and growing concerns among Americans about a faltering economy and growing national debt, there is a growing clamour for a rapid withdrawal of United States troops from Afghanistan. 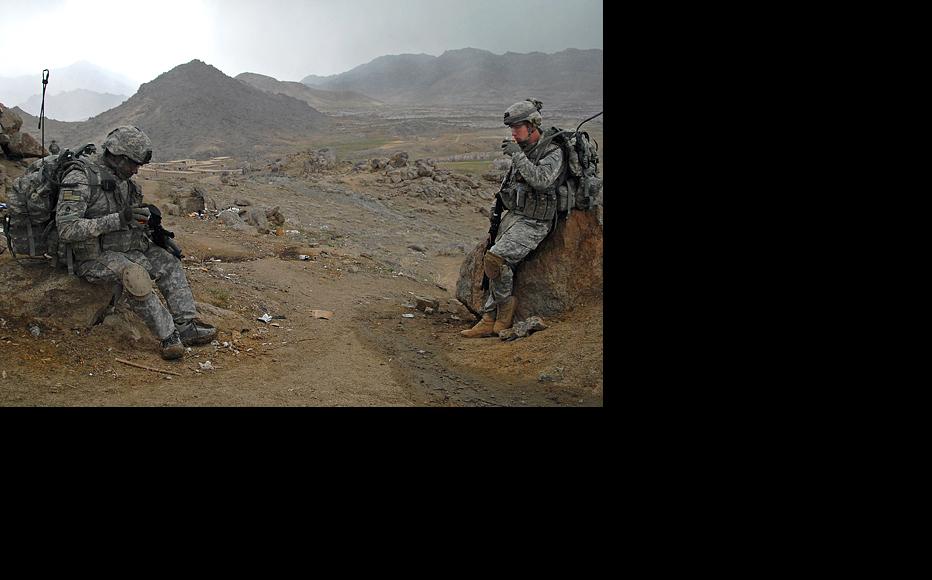 American soldiers at an outpost in the southern Zabul province. (Photo: Staff Sergeant Adam Mancini/US Army)
The link has been copied

A hasty exit of US forces at this critical time in Afghanistan would, however, be a major mistake.

Not only would it open the door to the civil warfare and chaos that once nearly destroyed Afghanistan, it would create the same conditions that brought US and NATO forces there in the first place.

It would also mean abandoning millions of Afghans who have committed themselves to a future based on the international community’s commitments to their country, and leaving them vulnerable to the kind of ethnic conflict that they hoped was behind them.

While Bin Laden’s death was a symbolic victory in the war on terror, it did not, in and of itself, make the world safer. Al-Qaeda continues to exist as an organisation, with any number of people likely to fill the role of leader.

It was the al-Qaeda presence in Afghanistan that prompted the international community to topple the Taleban government that was hosting the group.

Since the Taleban were scattered by the US-led invasion, they have shown remarkable resilience and have steadily increased over the past four or five years to a point where they are perhaps stronger than ever.

The Taleban are allied with other insurgent groups, some with even more virulent views. Among them are the Haqqani network, led by Jalaluddin Haqqani and lately by his son Sirajuddin, Gulbuddin Hekmatyar’s Hezb-e Islami, and now by Lashkar-e Islam, one of several groups that make up the Pakistani Taleban.

The calls for an early US withdrawal refer to statements by military commanders about the gains made against the Taleban in southern Afghanistan in the last 18 months. While those military achievements are real, the fact is that as soon as US and other international forces withdraw, the Taleban will return, facing Afghan national forces that have so far shown they are not up the task of securing the country.

The most dramatic example of this is perhaps the recent escape of nearly 500 Taleban fighters and other assorted criminals from a prison in Kandahar, carried out under the watchful eyes of government security.

While the south has seen temporary gains, the once secure north has deteriorated dramatically.

A look at recent events reveals the awful reality. The province of Kunduz has been a particular focus of the Taleban resurgence, creating a ripple effect across northern Afghanistan where the insurgents seem able to strike at will.

On March 14, suicide bombers struck at the Afghan military in Kunduz city, killing 36 and injuring 32. This attack followed some four similar attacks in the previous weeks, one of which targeted civilians signing up to work with the government.

A more recent dramatic attack took place on May 28 when a suicide bomber dressed in police uniform gained entry to a high-level security meeting in Takhar province, killing the police commander for northern Afghanistan and injuring the German commander of NATO troops in the region.

On May 30, what appeared to be Taleban forces carried out a well-coordinated, four-pronged attack in the western city of Herat, the focus being on the Italian-run Provincial Reconstruction Team headquarters. A number of suicide bombers carried out the attack, generating a firefight in the city centre that lasted more than five hours.

Some days later in the eastern Nangahar province, militants attacked and killed nine relatives of the governor, Hamisha Gul, who had gathered for a wedding party in a border town. This raid has been attributed to Lashkar-e Islam, a Pakistani Taleban group thought to have struck at Gul because he had been making progress in convincing locals to resist the militants, who had been using the area to infiltrate fighters into Afghanistan.

These are daily events that occur in every corner of Afghanistan, but go unreported by much of the international media.

The undeniable fact is that the Taleban are resurgent. Afghanistan hangs in the balance.

Wars are costly. And understandably, the American and European publics are weary of ten years of seemingly endless warfare in a country that has been called the graveyard of empires.

A premature withdrawal of international forces from Afghanistan would, however, inevitably set the stage for chaos throughout much of Afghanistan, and would again provide terrorist groups with the safe haven they are currently denied.

Such a withdrawal would play into the hands of terrorist groups. Increasingly adept at public relations, they could claim victory over the so-called foreign invaders.

The monetary cost of the war today is undoubtedly less than it would be if the international community withdrew, only to find itself under attack again by resurgent terrorist groups, and to face the prospect of having to go back in.

On both the civilian and military sides of this effort, the job is Afghanistan is far from done.

The US and NATO should begin a modest withdrawal of non-critical forces from Afghanistan, as planned, while looking toward 2014 as a start date – not an end date – for the bulk of security work to be handed over to Afghan forces.

A safe and viable Afghanistan is necessary for stability in the region, and also for global security. A hasty, poorly-timed withdrawal for short term financial and political gain is the wrong thing to do now, or in the foreseeable future.