Defendant argued that current proceedings needed to be split in two after genocide charge was reinstated. 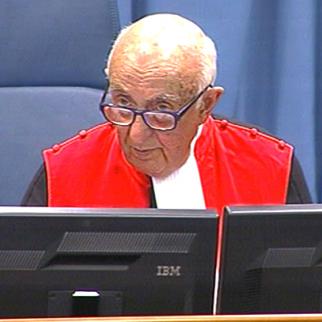 Charge relates to Bosnian municipalities other than Srebrenica. The genocide charge for the massacre there was never dropped.

Defendant argued that current proceedings needed to be split in two after genocide charge was reinstated.

Judges at the Hague tribunal have denied Radovan Karadzic’s request to sever the first count of genocide from the other ten counts in his indictment.

The first count is a charge of genocide relating to seven Bosnian municipalities, but not to Srebrenica, for which there is a separate count of genocide whose presence in the indictment has not altered and which is unaffected by changes to Count 1.

Karadzic was acquitted of Count 1 in June 2012, as a result of a process known as “98 bis”, which occurs at the conclusion of the prosecution’s case. According to this rule, if there is no evidence capable of supporting a conviction, judges can acquit a defendant of one or more counts in the indictment before the defence case begins

Karadzic began his defence case in October 2012, and because Count 1 had been dropped from the indictment, he did not present witnesses to defend him against it.

On July 11 this year, however, appeals judges reinstated the first count of genocide, arguing that trial judges had been wrong to conclude that there was insufficient evidence to support a possible conviction.

When Count 1 was reinstated, Karadzic presented the argument that this genocide count must be severed from the rest of the case, on the grounds that “proceedings under Count 1 may be long and complex and could delay the ongoing trial”.

After considering this point, trial judges ruled against it on August 2, stating that “holding a second, separate trial on Count 1 alone would create an unnecessary burden on victims and witnesses, who would have to return to the tribunal to give additional and wholly repetitive evidence”.

In addition, they said, “there is no indication at this stage that completing these proceedings with Count 1 reinstated as instructed by the appeals chamber would make the proceedings unmanageable”.

When appeals judges overturned Karadzic’s acquittal on Count 1, Karadzic asked them to clarify what they meant when they “remanded the matter to the trial chamber for further action consistent with this judgement”. He argued that this meant the trial chamber was supposed to decide on the matter anew.

The appeals chamber declined to provide a clarification, stating that this would be “inappropriate”. And in its August 2 decision, the trial chamber stated that it regarded the appeals judgement as “unequivocal” and that it had been “simply instructed to take necessary and appropriate action with regard to the defence case, with Count 1 having been reinstated”.

Karadzic is now appealing against this part of the August 2 decision, arguing that the trial chamber has “failed to comply with the instructions of the appeal chamber”.

Also on August 2, the trial chamber granted another request that Karadzic had made separately, seeking a postponement of his ongoing trial. But they allowed him only two months’ additional preparation time instead of the four months he asked for. That means his defence case will resume on October 28.