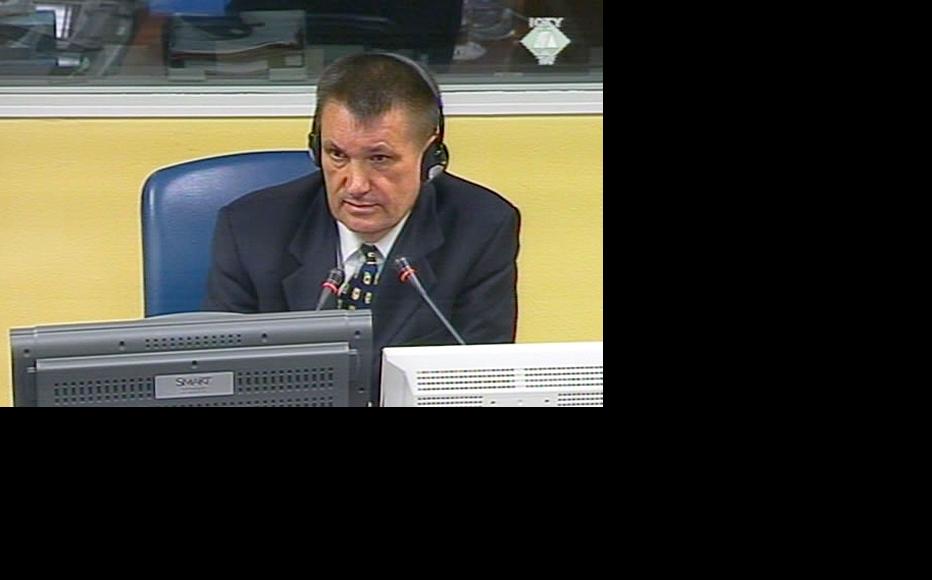 Prosecution witness Mladen Loncar in the ICTY courtroom. (Photo: ICTY)
The link has been copied

A witness testifying in the trial of Croatian Serb political leader Goran Hadzic this week described being badly beaten at a prison camp in Serbia.

Prosecution witness Mladen Loncar, a psychiatrist, is a former inmate of the Begejci detention centre, a camp set up in autumn 1991 where large numbers of prisoners-of-war from Serb-claimed parts of Croatia were imprisoned.

“There were no toilets, no hygiene whatsoever, food and water were scarce.… We were forced to remain lying on the floor with our face down so as not to see what was going on in the camp. It was a horrendous experience – a horror of beatings,” Loncar told the court.

This was Loncar’s third appearance at the Hague tribunal. Previously, he has given evidence in his capacity as a psychiatrist and testified about the trauma experienced by the local population during the war.

Hadzic is charged with 14 counts of war crimes and crimes against humanity committed against Croats and other non-Serbs during the war in Croatia in the early 1990s, including persecution, extermination, murder, imprisonment, torture, inhumane acts, cruel treatment, deportation, wanton destruction and plunder.

He is alleged to have been part of a “joint criminal enterprise” with other political and military officials, whose purpose was the “permanent forcible removal of a majority of the Croat and other non-Serb population from approximately one-third of the territory of the Republic of Croatia” in order to create a Serb-dominated state.

During the conflict, Hadzic held senior political positions in Serb-held parts of Croatia, and he was president of the Republic of Serb Krajina (RSK) from February 1992 to December 1993.

Giving evidence this week, Loncar described himself as “a very normal citizen, originally from Ilok”, a Croatian town that straddles the border with Serbia.

Loncar, who is an ethnic Croat, said that “nobody really cared about his nationality or that of anyone else” until the rise of Serbian president Slobodan Milosevic. Loncar said he studied medicine at the University of Novi Sad in Serbia, which was “the closest university to Ilok”.

On the eve of war, Loncar said that he ventured into politics and founded the “local branch of the Croatian political party in Vojvodina”, the Serbian region of which Novi Sad is the main town.

The witness explained that he was still working and living in Novi Sad when war broke out in his home town in 1991. In response, he “launched a public plea for help asking the international community to stop the violence in Ilok and to help the local population whose lives were being severely affected” by the “humanitarian crisis” which had ensued.

Shortly afterwards, in October 1991, police officers – who the witness suspected of being from the Serbian intelligence service – came to arrest him.

“I guess it was because of the public plea I had sent out and because of my political career, as brief as it may have been,” Loncar said.

He was let go after “a day-and-a-half or so”, but not before having been “beaten badly in the head [and] on the body.” He was also forced to write “reports on what they said I was supposed to write as ‘really’ going on in Ilok”.

On November 3, 1991, Loncar was arrested again, but this time taken to Yugoslav army (JNA) barracks in Serbia, in a place called Paragovo, where he was “crammed into a room with about ten other people.

“We were left with almost no air inside, let alone space to get some rest. We were subject to beatings. It felt like we were being beaten, examined, taken in and out of the room on an hourly basis,” he said, adding that he spent three days at Paragovo before being transferred to Begejci.

“When we came to Begejci, it felt surreal; it was a well-guarded fortress and a site of enormous beatings with no conditions for living whatsoever,” Loncar said.

He estimated that some 600 people, mostly ethnic Croats, were being held in the camp, including “two dozen or so women”. These women, said Loncar, were being “regularly raped and called up whenever one of the camp guards or commanders needed sexual pleasure”.

Apart from Croats, Loncar confirmed that the camp contained a number of foreigners, including some people “from Sri Lanka who were obviously just travelling around”. The Sri Lankans were forced to sing Serbian songs while being beaten.

“Once they were beaten so badly that I was invited to check whether they were still alive,” Loncar said.

One 14 year-old boy with learning difficulties, who was the youngest inmate in the camp, “was treated as a star in a perverse fashion, having been forced to tell and repeat how he had spent time killing Serbs while speaking to television cameras”.

Loncar confirmed that the name of the commander of the camp was Miroslav Zivanovic.

He also added that he was unexpectedly exchanged on December 10, 1991, for a group of Yugoslav counter-intelligence officials arrested in the Croatian capital Zagreb.

Loncar said he was taken to a plane, beaten before he got on, and then accompanied by JNA general Aleksandar Vasiljevic, who recently also appeared as a prosecution witness in the Hadzic case. (For more on that testimony, see We Told Hadzic of Paramilitary Crimes.)

During the brief cross-examination, the defence counsel asked the witness whether Vasiljevic had seen him being beaten by the JNA soldiers.

“I guess so. He must have seen it,” Loncar said. “But he acted like nothing happened. He was joking on the plane, giving out cigarettes to people.”

During his testimony, Vasiljevic had claimed that the JNA would court-martial any of its soldiers suspected of committing crimes or acting in opposition to the Geneva conventions.