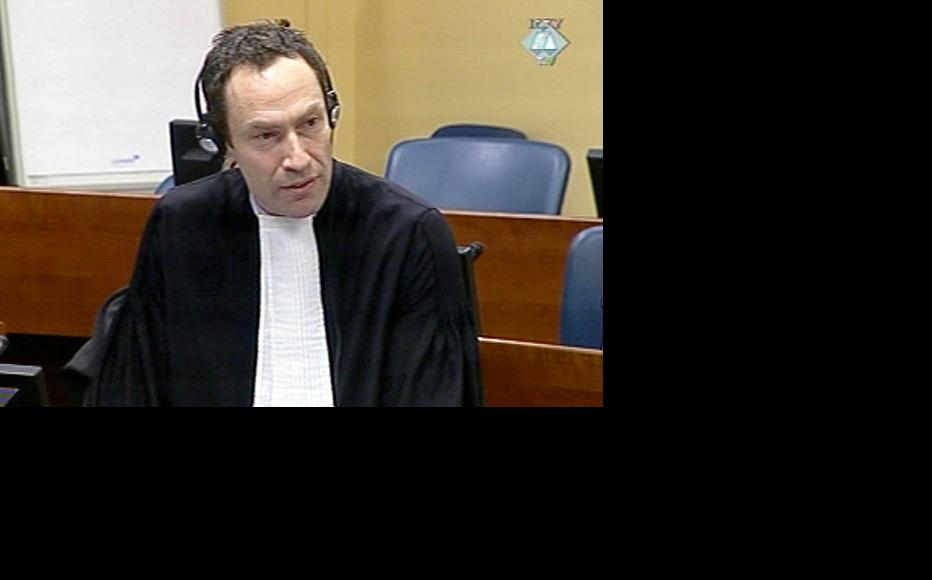 Chris Gosnell, Goran Hadzic's defence lawyer at the ICTY. (Photo: ICTY)
The link has been copied

Defence lawyers for wartime Croatian Serb political leader Goran Hadzic argued this week that the charges against their client should be dismissed because the prosecution had failed to prove its case.

The special hearing was held under a tribunal rule, 98-bis, that allows defendants to ask for an acquittal at the conclusion of the prosecution’s case. If the judges find there is no evidence to support the counts in the indictment, they can order a full or partial acquittal before the defence case even begins.

Hadzic, who served as president of the breakaway Serb state in Croatia, the Republic of Serb Krajina (RSK), is charged with 14 counts of war crimes and crimes against humanity committed there in the early 1990s. The indictment includes charges of persecution, extermination, murder, imprisonment, torture, inhumane acts, cruel treatment, deportation, wanton destruction and plunder.

Along with other Serb political and military officials, Hadzic is alleged to have been part of a “joint criminal enterprise” whose purpose was the “permanent forcible removal of a majority of the Croat and other non-Serb population from approximately one-third of the territory of the Republic of Croatia” in order to create a Serb-dominated state.

Hadzic’s defence lawyer Chris Gosnell argued this week that none of the counts in the indictment had been proven during the prosecution’s case, at least as they related to the accused’s individual criminal responsibility.

The lawyer said the evidence presented in relation to the crimes listed in the indictment, in particular the killings at Ovcara farm in November 1991, the village of Lovas in eastern Croatia, and the treatment of Croatian prisoners in detention camps in Serbia, was “sufficient to prove the criminal responsibility of many persons”, but not that of Hadzic himself.

Gosnell went on to argue that the prosecution’s evidence shows that the local Territorial Defence units in RSK, as well as the military police, were under effective control of the Yugoslav army (JNA). There was nothing presented in court that linked Hadzic himself to the crimes, he said.

For example, when some 260 Croatian detainees were taken from Vukovar hospital to Ovcara farm and executed, it was an operation “organised, commanded and supervised by JNA Guards Brigade section commander Veselin Sljivancanin”, and carried out by Territorial Defence forces under JNA command and control, the lawyer said.

“If the responsibility of someone cannot be proven, if he cannot be convicted, then he can be acquitted,” Gosnell argued.

Prosecuting lawyer Douglas Stringer called on the chamber to decline the defence’s request, insisting that Hadzic’s criminal intent had been proven “with a large amount of evidence”.

“The proceedings have shown that Mr Hadzic has personally contributed to the joint criminal enterprise and taken part in individual incidents,” Stringer said.

He emphasised that Serb civilian authorities were in “coordination with the JNA” and with paramilitary units, including those commanded by Zeljko Raznatovic, whom Hadzic once referred to as “his rabid dog.” The intent of this coordination was the permanent removal of non-Serb populations from large areas of Croatian territory, Stringer said.

Furthermore, Hadzic was quoted as saying that he “is not sure whether Croats are human at all” at a public event in the Serbian town of Sid in December 1991.

The defence has claimed that the detention of Croatian prisoners at different facilities inside Serbia cannot be linked to Hadzic, as this happening hundreds of kilometres away from RSK territory.

However, the prosecution contends that Hadzic often visited Serbia and enjoyed very close cooperation with both the JNA units and civilian authorities there. He is alleged to have “reached a deal with the JNA authorities” to have Croatian detainees transported back to RSK territory, where according to the prosecution a number of them were killed.

Prosecutor Stringer said Hadzic played a “decisive role” in the Ovcara massacre. While the detainees were indeed being handled by the JNA, Hadzic personally pressured the army to turn over the prisoners to Territorial Defence forces which were under his command, Stringer said.

“The operation of killing of the detainees was [overseen] by the commander of Territorial Defence forces and Hadzic’s [trusted associate], Miroljub Vujovic,” the prosecutor said.

The chamber will reach a decision on the 98-bis submissions in due course.

If Hadzic is not acquitted, the defence will present its case after it has had time to prepare, most likely after a break of a few months.