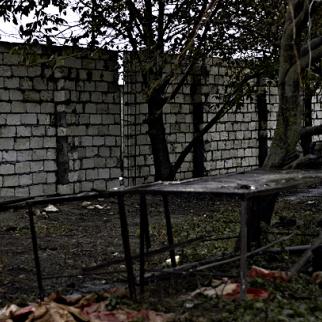 Some question wisdom of security walls, arguing that they might be seen as tacit admission that Armenian-held lands are lost forever.

Although a ceasefire has held in the Nagorny Karabakh conflict since 1994, the peace is frequently interrupted by bouts of gunfire. In the latest tragic incident, two young Armenians were killed by shots fired from the other side of the “line of control”.

Aren Simonyan was killed on November 19 and Mihran Margaryan the following day. Both were members of the Karabakh Armenian military and at 19, would only have been toddlers when the conflict was in full swing.

At the end of the war, Armenian forces retained control of all of Nagorny Karabakh – an Armenian-majority region inside Azerbaijan in Soviet times – and also of surrounding areas of land. Because the sides cannot agree on how a final settlement should look, no peace agreement has been signed, despite efforts by mediators from Russia, France and the United States who make up the so-called Minsk Group.

Hopes were high that a summit in Russia in June might produce a breakthrough, but once again nothing came of it.

Officials in Karabakh and in Baku each regularly accuse the other side of breaking the ceasefire, commonly with the kind of sniper fire that left Simonyan and Margaryan dead.

Azerbaijan is committed to regaining control of Karabakh and the adjoining areas now held by the Armenians. This, plus Baku’s massive arms spending underwritten by oil revenues, increases Armenian suspicions about its intentions.

The Karabakh Armenian defence ministry suggested that the deaths of the two soldiers reflected plans by Azerbaijan to step up its military presence, and promised to respond accordingly.

“This incident… confirms yet again that not only does Azerbaijan not respect efforts by international mediators to reach a peace deal, it is also taking steps to increase tensions in the region. This circumstance obliges Karabakh to take tougher actions of its own and respond in kind,” a statement from the ministry said.

In response to what they see as the deliberate targeting of civilians by Armenian snipers, the Azerbaijani authorities have recently begun building walls to protect villages located close to the line of control. When IWPR reported on this issue from the Azerbaijani side, villagers there said their homes were regularly targeted by snipers.

The village of Talish in the Martakert region is about five kilometres back from the line of control, but residents say they frequently come under fire. One man, Vilen Petrosyan, said the shooting became more frequent during the seasons when farmers were out at work, and more exposed.

“Of course the gunfire has become an everyday thing for us, and the danger is ever-present,” he said. “It isn’t just people who suffer, but also our livestock. My brother got injured in the stomach, and only survived by a miracle. We who live here have no sense that there’s a ceasefire at all.”

Such is the level of mutual mistrust that on the Armenian side of the dividing line, officials and residents suspect that the walls are intended to provide cover for Azerbaijani sharpshooters.

“Not only is Baku is doing this in a bid to present itself as the victim, but it could even use these walls to conceal snipers,” David Babayan, spokesman for the president of Karabakh, said.

At the same time, Babayan suggested that the walls could be seen as a tacit recognition of Karabakh and its boundaries.

“You can welcome the initiative in one way, since a wall like this effectively gives the borders a clearer form,” he said.

In Armenia itself, Deputy Foreign Minister Shavarsh Kocharyan was just as sceptical about Azerbaijan’s justification for its walls.

“The wall is the physical embodiment of Azerbaijan closing itself off from reality,” he said. “The wall protects Azerbaijan from… [mediators’] requests for it to remove its snipers from the line of control.”

Karen Bekaryan, head of the European Integration NGO in Yerevan, said that the wall was a “paradox”.

“If its aim really is to protect against sniper fire, then why won’t Azerbaijan agree to the mediators’ suggestions that snipers should be withdrawn from the front line?” asked.

For ordinary people living close to the front line, the wall symbolises mistrust of the other.

Zaven Avetisyan, a resident of Mataghis in Karabakh’s Martakert district, said he was delighted that the Azerbaijanis were putting up walls.

“The more they are separated from us, the better. Then neither of us will ever see the other,” he said. “We won’t see them, and they won’t see us,

Karine Ohanyan is the Russian-language editor of the Armedia news agency in Yerevan. Lusine Musaelyan is a correspondent for RFE/RL in Nagorny Karabakh.