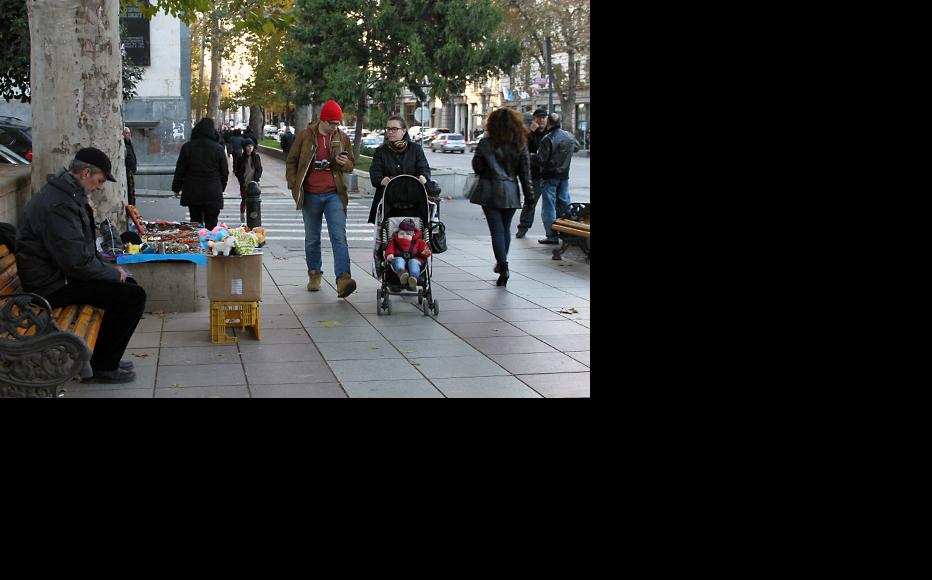 Georgians are thinner on the ground than anyone thought. (Photo: Regina Jegorova-Askerova)
The link has been copied

When preliminary results from Georgia’s first census in more than a decade were released this year, they provided a shocking reality check. They showed that the country’s population as of last year was just 3.7 million, nearly 800,000 fewer than the previous official estimate.

At the time of the 2014 census, the website of the National Statistics Office of Georgia, known as Geostat, gave the population as about 4.5 million, a slight increase from the 2002 census figure of 4.37 million. The new data, however, suggest that there has been a 15 per cent drop since 2002.

Population decline is not a recent phenomenon in Georgia.

Georgia’s population grew steadily during the Soviet Union, reaching 5.4 million in 1989, the year of the last Soviet-era census.

When Georgia declared independence, large numbers of ethnic minorities — Russians, Greeks, Armenians and Jews in particular — left the country. Civil war, conflicts in the breakaway regions of South Ossetia and Abkhazia, and the poor economic situation continued that trend. Based on official figures, Georgia lost more than one million people or almost 20 per cent of its population between independence and 2002.

Many experts dispute the official figures.

Though South Ossetia and Abkhazia are recognised internationally as part of Georgia, Tbilisi lost control of them in the separatist conflicts of the early 1990s. While the 2002 count aimed to include people living in these breakaway regions, access was limited for the government’s census-takers. Instead of a complete census, Geostat calculated estimates based on a survey of those villages that were under Georgian control at the time.

The United Nations Population Division, which issues statistics worldwide, assumed that this resulted in an undercount of residents of Abkhazia and South Ossetia, and adjusted its figures upwards to compensate. It estimated Georgia’s population at 4.65 million in 2002, nearly 300,000 more than the Geostat figure.

The inadequate data for South Ossetia and Abkhazia were not the only concern with the 2002 census. The second related to how migrants were defined and included in the data. Paata Shavishvili, head of Geostat’s population census and demography division, says it is likely that households reported family members as resident in Georgia when in reality they had gone abroad. Although the census included a special migrant questionnaire, not all emigration was captured in the census.

Unlike the UN Population Division, prominent Georgian demographer Giorgi Tsuladze adjusted his 2002 population estimate downwards to account for underreported emigration. He estimates there were just four million people living in Georgia in 2002.

Population estimates since the 2002 census have been just as varied. Before the preliminary results of the 2014 census were released in April, estimates ranged from Tsuladze’s estimate of 3.77 million — the figure closest to the new census data — to the CIA World Factbook’s number of over 4.9 million.

The estimates are based on birth and death registration as well as migration data, all of which are widely acknowledged as inaccurate. The UN Population Fund has noted significant gaps in the civil registration of births in Georgia between 1990 and 2010.

Migration data is similarly unreliable. As Shorena Tsiklauri, an expert with Geostat’s population census and demography division at, explains, “We regarded everyone crossing the border as migrants, and that is not correct.”

Despite significant differences in their estimates, the figures from Geostat, the UN Population Division and Tsuladze all suggest that Georgia’s population has decreased to some extent since the 2002 census.

But does that matter?

Nino Doghonadze, a research associate at the ISET Policy Institute in Tbilisi, contributed to the UN’s 2014 population analysis of Georgia. She explains that while the traditional view is that population growth is good for the economy, this school of thought is not accepted by all economists and demographers. Those who disagree suggest that population growth only benefits the economy when additional workers can be employed. “Because it’s not how many people you have, it’s how many skilled people you have,” Doghonadze says.

According to a 2011 article published in Population and Development Review, individual standards of living are not necessarily adversely affected by declining populations.

Still, Georgia’s political leaders have tried to slow the decline by encouraging people to have more children. The Georgian Dream coalition government extended paid and unpaid parental leave in 2013 and increased financial incentives, particularly for families with three or more children.

Georgia’s popular patriarch of the Georgian Orthodox church did his bit in 2007 when he said he would personally baptise every child that was the third in his or her family. The following year saw a double-digit percentage increase in registered births, which demographers say is at least partially a result of the church’s initiative.

Doghonadze says what really matters are “dependency ratios”, the percentage of the population below 15 and over 65, considered to be non-working and dependent on the rest.

“Stimulating births is not the way to reduce this burden [of dependency],” she said. “In fact it’s vice versa. It increases the burden.”

Since population estimates vary so much, there is not even clear evidence that birth rates are low.

GeoStat’s Tsiklauri and Shavishvili agree that the main cause of population decline is not births or deaths, but emigration.

They say a new methodology was adopted in 2012 to better keep track of migration. Now, information is collected at border crossings on how long individuals have been inside or outside Georgia in order to determine their migration status. A person who has been outside of the country for more than six months is considered an emigrant.

Though the 2014 census does not include population estimates for South Ossetia and Abkhazia, it is expected to provide the clearest picture of Georgia’s demographic situation yet.

Still, without accurate historic data with which to compare the new data, it is impossible to know for sure whether Georgia’s population is continuing to decline, and if so, at what pace.

The final results of the census will be published no later than April 2016.

Heather Yundt is an IWPR trainer and multimedia producer.

Georgia
Life
Connect with us