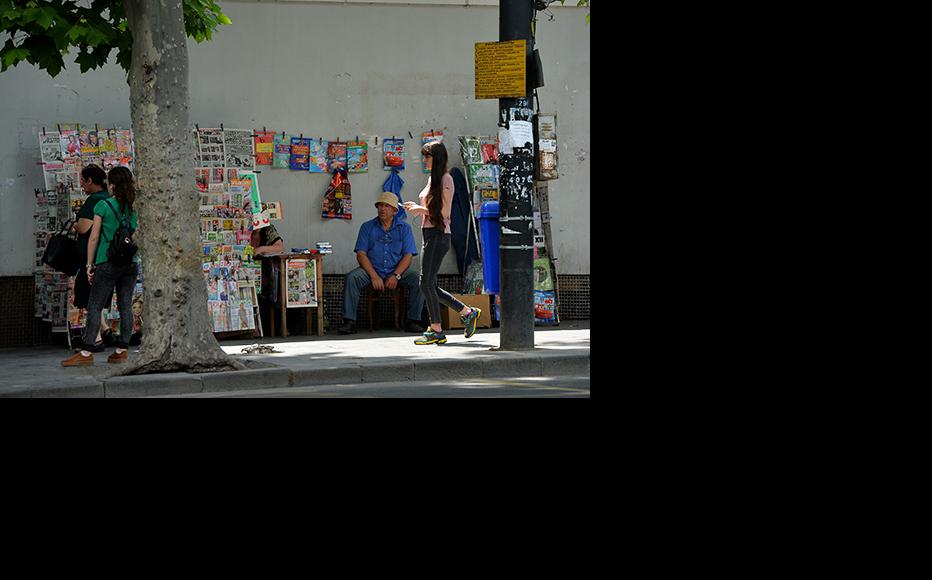 A street vendor sells newspapers and magazines in Tbilisi, Georgia. (Photo: Mark Runnacles/Getty Images)
The link has been copied

Analysts warn that the Georgian media scene risks increasing polarisation in the wake of the government’s shutdown of one of the country’s most popular TV stations.

With media ownership and content production seen as a highly politicised issue in Georgia, last year’s closure of Rustavi 2, known for its harsh criticism of the government, was widely viewed as a freedom of speech issue.

Although two new channels were formed soon after Rustavi 2 stopped broadcasting, experts warn that they remain partisan and have failed to boost media plurality.

In July 2019, Rustavi 2’s ownership was passed to its former owner businessman Kibar Khalvashi, who insisted that the station had been seized from him by former president Mikheil Saakashvilis’s government. A five-year dispute over the ownership of Rustavi 2 was concluded after the European Court of Human Rights (ECHR) also upheld this decision.

Nonetheless, it was widely believed in Georgia that the case was politically motivated and that the government wished to get rid of its leading critical media.

Both new stations – Matvari TV and Formula TV - employ former Rustavi 2 journalists and are funded by businessmen who oppose the current government or are linked to the previous administration.

Nika Gvaramia, the former director of Rustavi 2, now runs Mtavari and himself owns 51 per cent of the station. Gvaramia had held senior positions in Saakashvili’s government, including minister of justice and of education, before being appointed Rustavi 2 director in 2012, soon after the Georgian Dream election win.

One of Formula TV’s owners is Davit Kezerashvili, a former minister of defence during Saakashvili’s government.

Natia Kapanadze, the former executive director of Ajara Public Broadcaster, said that it was good that two new channels had been formed in the wake of the dismantling of Rustavi 2.

“The formation of these TV channels is a positive event as it will help to maintain media plurality within the market," she said.

“On the other hand, we can see the broadening of political polarisation, which is well illustrated by the content of TV Mtavari… the agenda of Mtavari is to criticise the government, in which it has replaced Rustavi 2,” she continued, adding that the channel sometimes neglected ethical standards to do so.

The Georgian National Communications Commission (GNCC) ruled that this constituted a political ad that could not be run outside a campaign season, although Mtavari’s laywer declared that it fit the channel’s editorial policy.

“Broadcasters play a crucial role in the process of forming public opinion, so Georgian politicians consider TV as the means for achieving their goals,” said Nata Dzvelishvili, the former executive director of self-regulatory body the Charter of Journalistic Ethics.

Television is the most popular means of accessing information in Georgia, with 73 per cent of citizens naming it as their main source for news about political and social issues.

“The perception is that one cannot come to power without having a television [channel] and this was confirmed in the 2012 elections when parties that were affiliated with different broadcasters got the seats in parliament,” Dzvelishvili said.

In  the World Press Freedom Index 2019, conducted by Reporters without Borders, Georgia was ranked 60 among 180 countries.

The report noted that while the reforms of recent years “have brought improvements in media ownership transparency and satellite TV pluralism, but owners often still call the shots on editorial content”.

A Media Monitoring report conducted by Georgian civil society organisations with the assistance of the European Union (EU) and United Nations Development Programme (UNDP) in 2016-2018 concluded that their survey  “clearly shows how the polarisation among the broadcasters has been growing. During this time, the editorial policy of the most of the broadcasters has formed in opposite directions and two poles were clearly identified ‐ in favour of the government and in favour of the National Movement”.

Georgia’s two public broadcasters - one located in the capital Tbilisi and the other in the city of Batumi in the Ajara region – appear not to be immune.

“The margin between public broadcasting and the government’s broadcasting has been eliminated,” said Lasha Kavtaradze, a former journalist who now works as a researcher for www.mediachecker.ge. “The only exception was in the period from 2012 to 2014 [the first years of the Georgian Dream government] when the government was [distracted and] unable to pay attention to broadcasters and managements were free from political pressure. One can’t say that broadcasters are serving government, but they are filtering or not sufficiently covering topics that might be uncomfortable for those who hold political power.”

On April 19th Natia Kapanadze, the executive director of the Ajara public broadcaster, was dismissed on the basis of not fulfilling obligations laid out in the network’s strategy, although his work had been favourably assessed by local and international watchdogs.

Experts also warn that a lack of independent sources of funding meant that broadcasters are vulnerable to persistent political influence.

According to the Transparency International Georgia’s reports Who Owns Georgian media and the Georgian Advertisement Market, outlets depend on the owners’ financial and political activities. This makes channels vulnerable to any changes in the owner’s status.

One well-known example was the TV9 channel, launched in 2011by Bidzina Ivanishvili when he decided to enter politics. After he won the elections in 2012, he dismantled the TV station.

“Financial declaration forms annually submitted to the GNCC makes clear that Georgian broadcasters are not self-sufficient, thus they are dependent either on their owners’ financial support or any other kind of donations, which makes them vulnerable and unsustainable,” said Salome Tsetskhadze, Transparency International Georgia’s lead media researcher.

Tsetskhladze said that Georgia’s advertisement market, which was split between Rustavi 2 (40.4 per cent of the total market) and Imedi (37.2 per cent) is too small and cannot support all the players.

The Georgian Advertisement Market study shows that television advertising revenues have been declining for the last five years. Total revenues fell from 40.9 million US dollars in 2016 to 31.8 million dollars in 2018.

The drop can be partly explained by the depreciation of the Georgian currency. But Rusudan Gigineishvili, a senior communication consultant at the international advertisement company Publicis Groupe, said that the issues were more complex.

“The major problem of Georgian advertisement market is that we are limited in content, thus we are unable to diversify media placement, as the market is basically built on two major channels, which also creates the problem of competition and transparency.”

Giving Voice, Driving Change - from the Borderland to the Steppes
Georgia
Broadcast, Media, Opposition
Connect with us