With the United National Movement at the helm, the region is now a test for local governance. 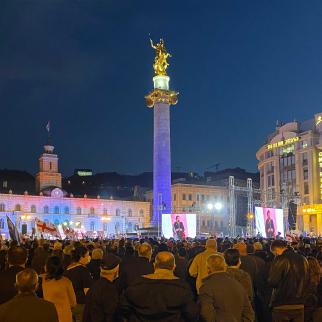 Thousands of protesters gathered in Freedom Square, in central Tbilisi, on October 14, 2021 and called for the release of former Georgian President MIkheil Saakashvili, who was arrested on October 1. © IWPR

With the United National Movement at the helm, the region is now a test for local governance. 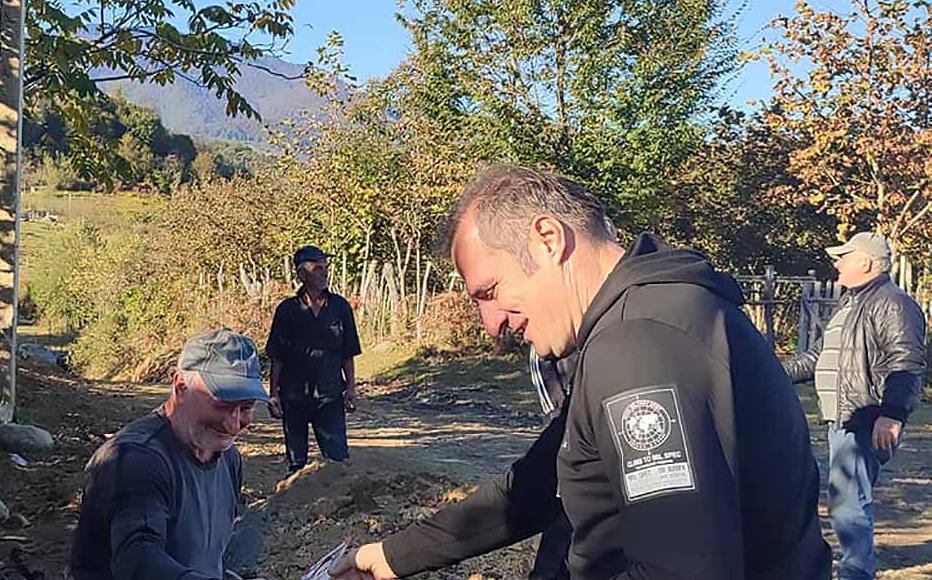 Gia Kharchilava, the UNM candidate who triumphed in Tsalenjikha, on a campaign trail in the lead up to the elections. © Gia Kharchilava's Press Office
The link has been copied

The municipality of Tsalenjikha in western Georgia holds a unique place on the country’s political map. It is the only one out of Georgia’s 64 municipalities in which an opposition candidate won last year’s mayoral elections.

The two rounds of local elections in Georgia last autumn took place amid a tense political atmosphere, deemed by many to effectively be a referendum on the ruling Georgian Dream (GD) party.

In October 2020, GD won a general election which the opposition maintained was rigged and refused to enter parliament. An April 2021 agreement between GD and parts of the opposition ended this boycott and mandated snap elections if the ruling party’s share of the vote in the local polls was less than 43 per cent.

In the event, GD gained control of all the country’s municipalities apart from Tsalenjikha, where the United National Movement’s (UNM) candidate Gia Kharchilava won the race by four per cent.

The opposition continues to maintain that the entire process was characterised by intimidation, administrative corruption and lack of transparency.

Kharchilava said that he saw his election as a test case for future opposition success.

“We need to build a civilised country in which the opposition will be able to win the next elections and completely replace the ruling party,” he continued. “This needs to be ensured by the law, the country’s development needs to be guaranteed by the constitution and the local-self governance law. It cannot be dependent on the relationship between the central government and specific municipalities. We need to create an exemplary model of how the relationship between the centre and opposition-run municipalities should look like.”

Experts note that the dynamic created in these elections had not been conducive to fostering democracy or effective local governance.

“The election process itself was pretty tense,” said political scientist Irakli Melashvili, an expert in local self-governance. “The fact that local self-governance topics became a secondary issue, and the main emphasis was on holding or not holding snap parliamentary elections - since the opposition saw 2021 elections as a referendum - was not great.”

He said that there was an unprecedented misuse of administrative resources in the run-up to these elections, a sign of how dependent local government was on the centre.

“The government is in charge of all the finances, properties, and projects needed for local self-governance, and naturally, even if they do not want to, local governments become obligated to be loyal towards the centre,” Melashvili explained.

Prior to the second round of the 2021 local elections, Prime Minister Irakli Gharibashvili announced that the opposition candidate’s victory in the municipalities would be akin to an act of self-harm, as local governments could do nothing without Tbilisi’s support.

“We have planned to enforce lots of different projects, and the victory of opposition candidates would mean that the enforcement of these projects would be disrupted,” Gharibashvili said, in comments that were widely criticised by foreign diplomats and the opposition.

Melashvili said that Tsalenjikha’s revenue was directly distributed from the regional development fund and thus not dependent on any political preferences.

“Therefore, unless the central government chooses to violate the law, Tsalenjikha will receive funding. How they will cooperate in other fields is difficult to say now, but they will have to do it somehow.  It is difficult to imagine such a confrontation taking place in a municipality where both the mayor and the city hall were run by the opposition. Tsalenijkha should be the initiator of, for instance, the decentralisation process in Georgia and put forward questions that will give the municipality greater independence.”

Davit Logua, head of the International Society for Free Elections and Democracy’s (ISFED) Samegrelo office, also said that the 2021 local elections had been a missed opportunity for the country’s democratic progress.

“The local elections represented a clear step back from the 2012 elections,” he continued. “The entire electoral process consisted of violations such as vote-buying, intimidation, persecution of political opponents, and misuse of administrative resources.”

“In light of an already unimaginable atmosphere, we heard the prime minister state that, despite opposition’s victory, the centre will be able to keep grip on the municipalities and create hindrances for the opposition. This unimaginable statement reinforced our doubts that drawing back on local self-governance reforms in the past was aimed at strengthening [or] continuing a centralised form of governance – in which local self-governance is merely a window-dressing & a supplement for vertical style rule.”

Kharchilava said that embarking on a process of decentralisation would be a priority, adding that he felt an extra responsibility to drive this as the only oppositive candidate to lead a municipality.

“The most important thing is that we carry out reforms,” he continued. “We are working on bringing citizens to the centre of local processes, as happens in real local self-governance. We will put forward different initiatives for decentralisation, and we have already started working on this.”

This included the creation of a so-called Tsalenjikha Freedom Charter, which laid out  steps towards effective local self-governance. Kharchilava also said that the opposition victory had sparked interest from businesses and NGOs alike, noting that the European Center for Multiparty Democracy (EECMD) had opened a new office in Tsalenjikha and that the Formula TV channel was reconstructing a sports stadium and planned to open a media centre in Tsalenjikha.

“We’re also working on agricultural development and have been contacted by Coca Cola’s representatives [regarding sponsoring the local statdium],” he continued.

However, Melashvili warned that that such initiatives alone were unlikely to build significant change.

“Everyone needs to look at the law more thoroughly, since moving [business] account centres to Tsalenjikha does nothing for the municipality – it does not create new jobs and doesn’t even bring one extra cent to the municipality,” he said. “No one has said anything about building something new or bringing their products into Tsalenjikha, and everything else is just statements made for PR purposes.

“I don’t think that bringing major change to one municipality in this system is realistic, I don’t think anyone will be able to build huge factories and employ thousands of people. That is why Coca Cola’s director’s initiative ended with him just building a stadium in Tsalenjikha – which is great, but it won’t increase the municipality’s budget.”

Samegrelo-Upper Svaneti region consists of seven municipalities and one self-governing city. The governor of the region, Giorgi Guguchia, told IWPR that he was planning to work with Tsalenjikha just like with any other municipality.

“The prime minister invited the newly elected mayor of Tsalenjikha for a meeting, but the mayor did not attend,” he said. “We once again reaffirm our willingness to work for the well-being of Tskalenjikha’s residents, and they will receive the same benefits from the central government as any other residents of Georgia.”