Failures to deliver on political promises have people back out in the streets.

Failures to deliver on political promises have people back out in the streets. 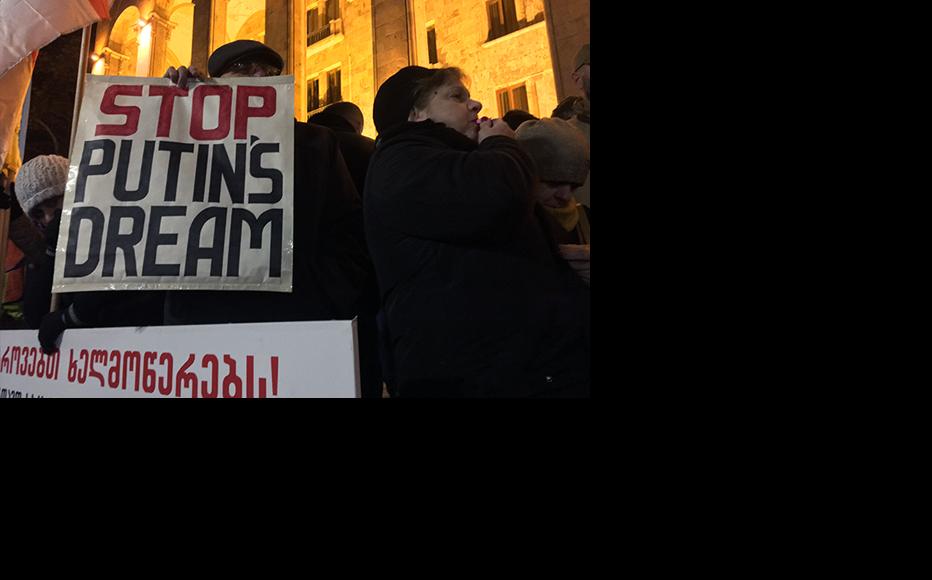 A demonstrator holding a poster referring to the ruling Georgian Dream Party, accused by protestants of siding with Putin's government. (Photo: Temur Kighuradze/IWPR) 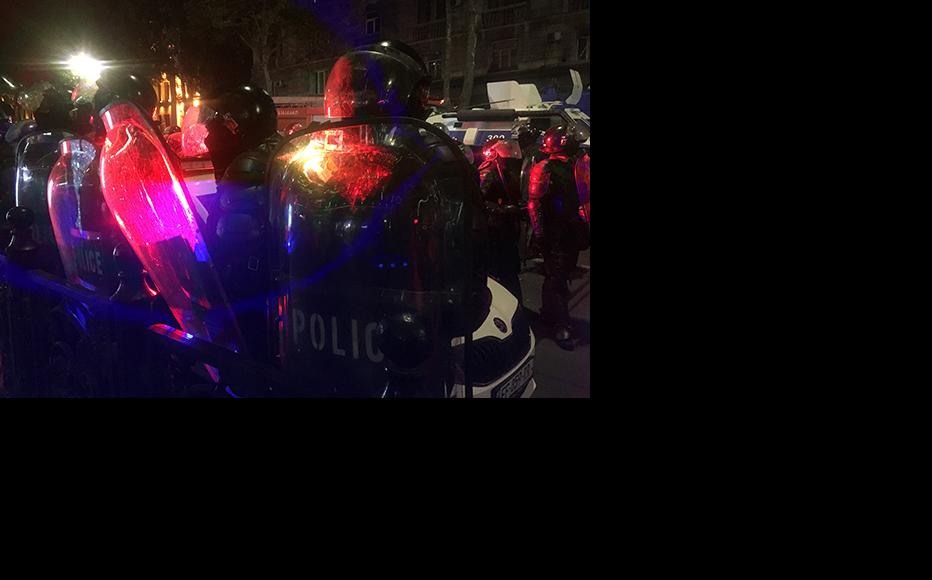 Riot police have turned out every evening since the protests resumed on November 15. (Photo: Temur Kighuradze/IWPR)
The link has been copied

Protests have resumed in the Georgian capital Tbilisi as demonstrators demand the government fulfil their pledge to change the country’s electoral system.

At least three people were injured and tens of protesters detained after riot police dispersed a rally on November 26, when thousands of people marched through the centre of Tbilisi to gather at the parliament building.

This summer, the government promised to pass legislation that would allow the country to transition to a fully proportional electoral system for elections scheduled for autumn 2020.

The move came after a violent crackdown at another protest rally in Tbilisi which left hundreds of people injured. A number of protesters lost eyes due to the rubber bullets used by the riot police.

However, Georgian lawmakers voted down the electoral reform on November 14 lacking the ten votes needed to pass it.

“The case is closed,” said Kakha Kaladze, the secretary general of the ruling Georgian Dream party told reporters on November 25, adding that the ruling party “doesn’t have the resources” to collect the necessary votes.

“I can’t even recall how many times since this summer I had to protest the same thing on Rustaveli [avenue], 25 or 30 times for sure,” said Vakhtang Berikashvili, a 30-year-old software developer, as he stood outside the parliament building with his fellow protestors.

Berikashvili was injured on June 20 rally when he was shot in the arm with a rubber bullet as police attempted to disperse a protest.  Shortly after undergoing surgery, he rejoined the demonstrations.

“We stopped the rallies in summer because a lot of people, including me, believed that the government would be willing to make the change and we will have democratic and fair elections, but here we are here, again,” Berikashvili concluded.

The Georgian parliament currently consists of 150 members, 73 of them majoritarian and representing electoral districts throughout the whole country. The rest of the seats are distributed according to the percentage of votes given to the parties and electoral blocs.

The system has long been criticised by political activists, experts and NGOs.

“There is nothing wrong with the majoritarian system itself, it is how it was used under previous and current governments,” said political analyst Gia Khukhashvili. “It gives an opportunity to directly buy out necessary seats in the parliament and form a majority without getting great results in the elections.”

Georgian Dream leader, billionaire Bidzina Ivanishvili, stated on November 14 that he was himself “disappointed” that members of his own party did not support his proposal to switch to a proportional system.

But some analysts and opposition figures said that they doubted members of parliament who voted the bill down had been acting on their own initiative.

“It’s hard to imagine that lawmakers who were silent in parliament for many years decided to show initiative and start a mutiny against their own party,” said Khukhashvili.

“Bidzina Ivanishvili and the ruling party should accept full responsibility for the current crisis,” added David Bakradze, a former parliament chair and member of the opposition European Georgia party. “They [Georgian Dream] can’t disregard people to save their seats forever, they should seek compromise, a way out from the current situation, not use riot police to spread fear.”

Pointing to low poll ratings for political parties across the board, he said that the current government’s actions had led to “a feeling of nihilism in the population”.

Indeed, public opinion surveys recently published by the International Republican Institute (IRI) show that ruling party leads in ratings with just 23 per cent of potential voters, although this is down from 26 per cent in June. Opposition parties peak at 15 per cent for the National Movement party, founded by former Georgian president Mikheil Saakashvili. The rest of the opposition bloc enjoys even less support.

“Results like this are nothing new; [other] polls in recent years also show the overall mistrust of the population towards politicians,” said Gia Nodia, head of the Caucasus Institute for Peace, Democracy and Development.

He noted that the combined rating of the opposition parties exceeded the popularity of Georgian Dream.

“When the ruling party fails to deliver on such a simple promise, [of proportional elections] it’s hard to maintain the trust of the voters,” he concluded.

Low ratings might not be the only challenge the Georgian authorities face. Kornely Kakachia, director of Georgian Institute of Politics think tank, warned that the current political climate was also damaging Georgia’s international reputation.

“We are already facing the problem of the lack of investment in Georgia in recent years. Any instability that might lead to a political and economic crisis will reflect on investments as well,” he said.

Outside support might be lacking in other ways, too. Kakachia noted that 2020 was also due to be an election year for a number of Western nations, adding, “The international community might not be able to monitor the situation in Georgia as thoroughly as they did in 2012 [parliament elections].”

Giving Voice, Driving Change - from the Borderland to the Steppes
Georgia
Opposition, Political reform, Protests
Connect with us