With both Armenia and Azerbaijan as neighbours, Tbilisi has long tried to stay neutral.

With both Armenia and Azerbaijan as neighbours, Tbilisi has long tried to stay neutral. 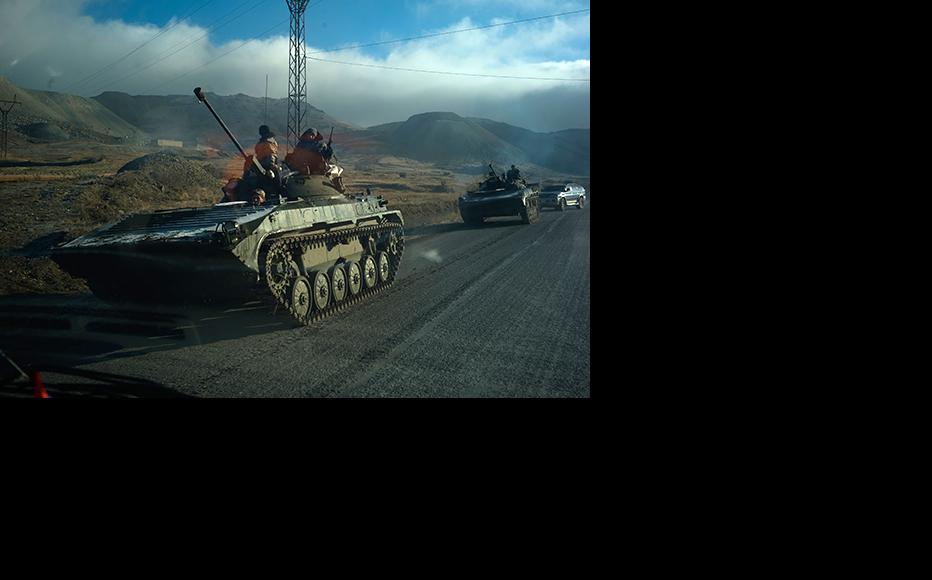 Armenian tanks leave Nagorno-Karabakh following the end of the war with Azerbaijan on November 12, 2020 in Vardenis, Armenia. (Photo: Alex McBride/Getty Images)
The link has been copied

Georgian fears that the Karabakh conflict might spill into a wider regional confrontation have been eased by the November 9 ceasefire agreement. But analysts warn that the deal, which sees Russian peacekeepers stationed in Karabakh for the next five years, may bring its own strategic risks.

Sharing borders with both Armenia and Azerbaijan, Georgia has long attempted to maintain a position of neutrality over Karabakh.

Soon after the war began on September 27 and fearing a wider confrontation, Georgia stepped in to offer Tbilisi as a platform for regional negotiations.

“Georgia is ready to contribute to the process of establishing peace in any form, including hosting a meeting of parties to the conflict in Tbilisi,” said prime minister Giorgi Gakharia.

This never materialised, although both Yerevan and Baku continued to keep a close watch on Tbilisi for perceived favouritism.

To forestall any allegations of bias, Georgia’s national security council issued a statement on October 3 announcing that the Georgian government had temporarily suspended the transport of military cargo to both countries through Georgian land and air space. No restrictions were imposed on civil or humanitarian freight.

Tbilisi remained focused on a position of neutrality given wider strategic issues with Russia, which backs Armenia, and Turkey, Azerbaijan’s main supporter.

While Tbilisi continues to be in a state of war with Moscow, it has mutually beneficial political, trade and economic relations with Ankara.

Giorgi Goguadze, director of the Georgian Centre for Strategy and Development, said that the alliance with Turkey was a fundamental part of the country’s foreign policy.

“Since the beginning of the 90s, Georgia has never had a different position on this issue, and I hope it will remain unchanged,” he continued. “This position does not depend on who is in power in Georgia. Tbilisi’s stance can change only in case of some radical changes, some kind of catastrophe, which is difficult to predict. Baku and Yerevan also understand our attitude quite well and treat Tbilisi’s policy with consideration.”

However, the Armenian side cast doubt on this supposed neutrality.

Data drawn from flightradar24 appeared to show that Azerbaijani defence ministry and governmental planes frequently fly through Georgian airspace to and from Israel and Turkey, although there was no evidence that these flights were supplying arms.

Ara Papian, the president of the Modus Vivendi Centre for Social Sciences, explained that Turkey and Azerbaijan’s economic ties to Georgia put Tbilisi in a weak position.

“[The flights] could carry civilian goods,” he continued, “However common sense suggests that especially those flying from Israel may carry weapons and ammunition. Flights to Armenia are also subjected to stricter examination. Georgia is under total Turkish-Azerbaijani economic, and consequently political, control. Georgia’s issues with Russia are also reflected in transportations from Russia to Armenia.”

Following the signing of the agreement,  Georgia’s ministry of foreign Affairs expressed hopes it would lead to a ‘full-scale resolution of the conflict,” while President Salome Zurabishvili released a statement congratulating the mediators and declaring a “new era” in the Caucasus.

However, others warned that Moscow’s new role was not in Tbilisi’s interests.

“It has legalized its presence on Azerbaijani territory… at least for five years, its military contingent is guaranteed to be located in these territories,” he continued. “This has previously happened in Georgia and its occupied territories."

Georgia has already allowed Russia to enter its airspace to transport peacekeepers to Karabakh, a particularly significant move as Georgian skies have been closed to Russian planes since 2008.

Meanwhile, despite fears at the start of the conflict, Georgia managed to avoid any conflict between its significant ethnic Azeri and Armenian communities.

Ararat Tttian, the editor-in-chief of the local community NOR radio said that there had been some early unrest among local communities in Samtskhe-Javakheti, a heavily ethnic Armenian region of Georgia.

Local Armenians had wanted to cross the border to fight or bring supplies but prevented from doing so by the authorities.

“People realized that the restrictions were in place due to the pandemic, and that the disturbance was not going to help,” Tttian said.

Nonetheless, according to local newspaper Jnews, 18 Armenian residents of the Georgian region of Javakheti who had travelled to Karabakh as fighters or volunteers were killed in the recent fighting.

Kamilla Mamedova, director of the community radio Marneuli FM, noted that ethnic Azerbaijani and Armenian members of the Georgian parliament had posted social media comments in support of Baku and Yerevan respectively, which she said had been unhelpful.

As for the wider Azerbaijani community, she continued, “There was a rally in support of Azerbaijan at the Azerbaijani embassy in Tbilisi, demanding the return of Azerbaijani lands,” she said. “There were no attempts to sign up as volunteers, they just expressed their emotions, which is quite usual for Azerbaijanis living in Georgia.”

“We should not be surprised by the tensions in the regions where Armenians and Azerbaijanis live,” Goguadze said. “[Such] emotions are common in war and we cannot forbid these people to feel sympathy for Yerevan or Baku. This is natural. The main thing is that everything should be done within the law.”

Giving Voice, Driving Change - from the Borderland to the Steppes
Georgia
Diplomacy, Conflict resolution
Connect with us