Amid the festivities, issues of integration and representation remain.

Amid the festivities, issues of integration and representation remain. 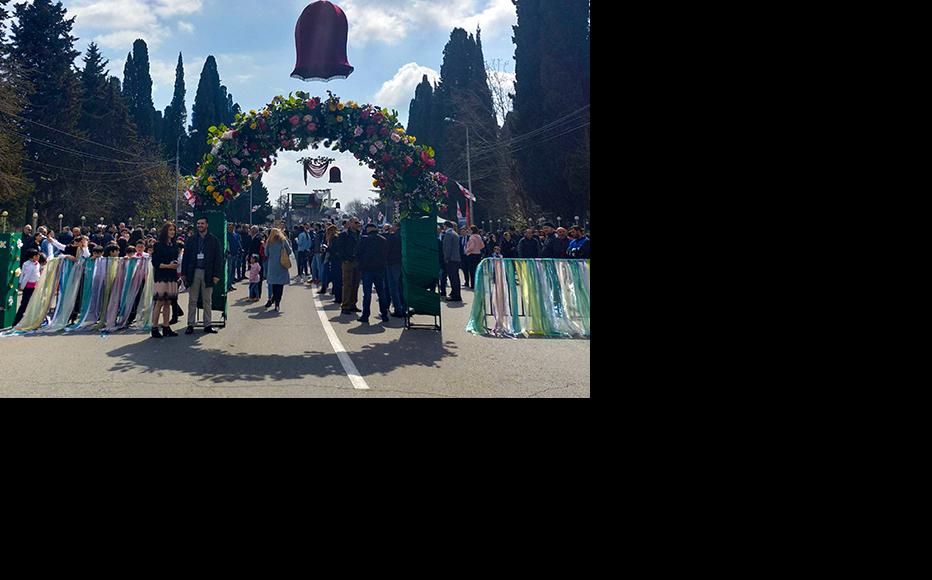 In honour of Nowruz, the main street of the city is closed to pedestrians. (Photo: IWPR Georgia) 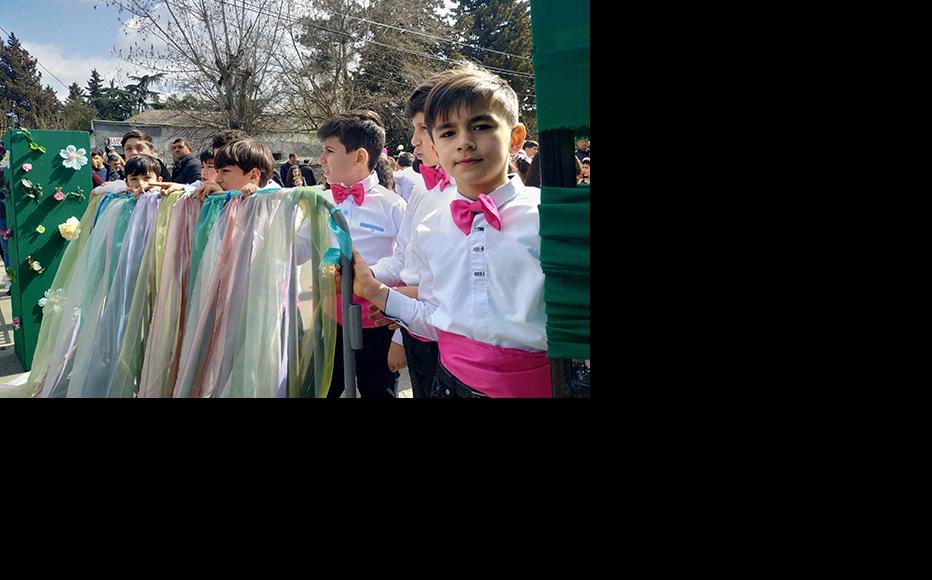 Children and musicians march as part of the celebration. (Photo: IWPR Georgia) 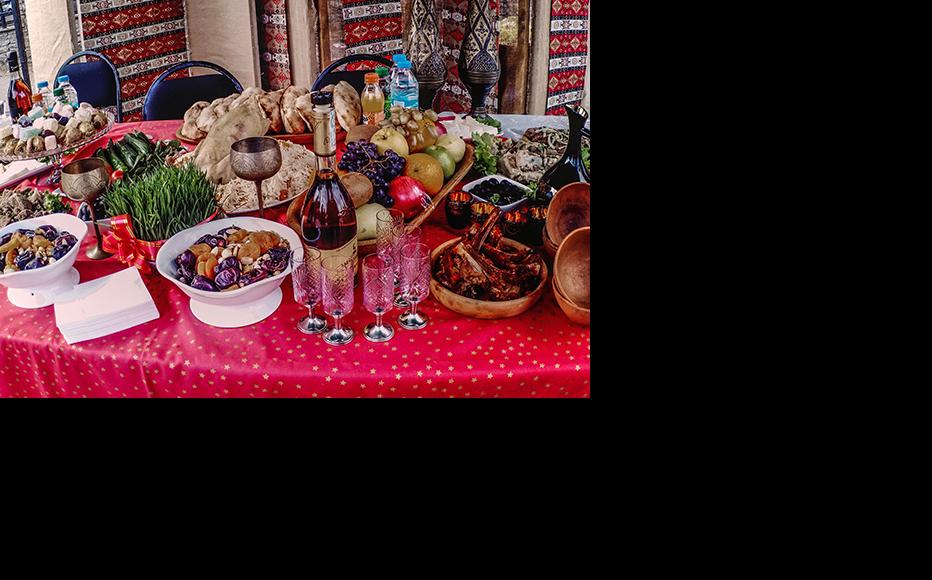 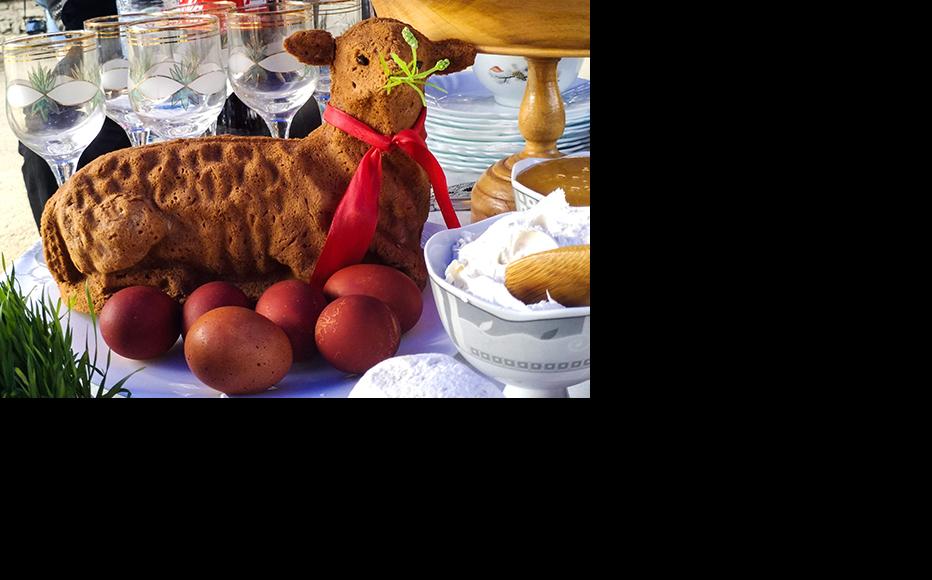 This lamb cake with eggs symbolises the beginning of the New Year. (Photo: IWPR Georgia) 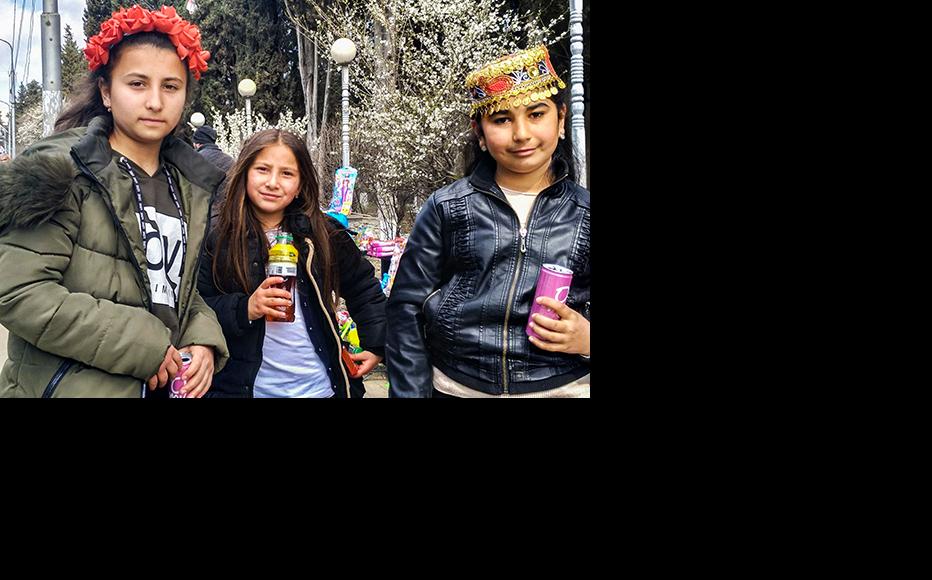 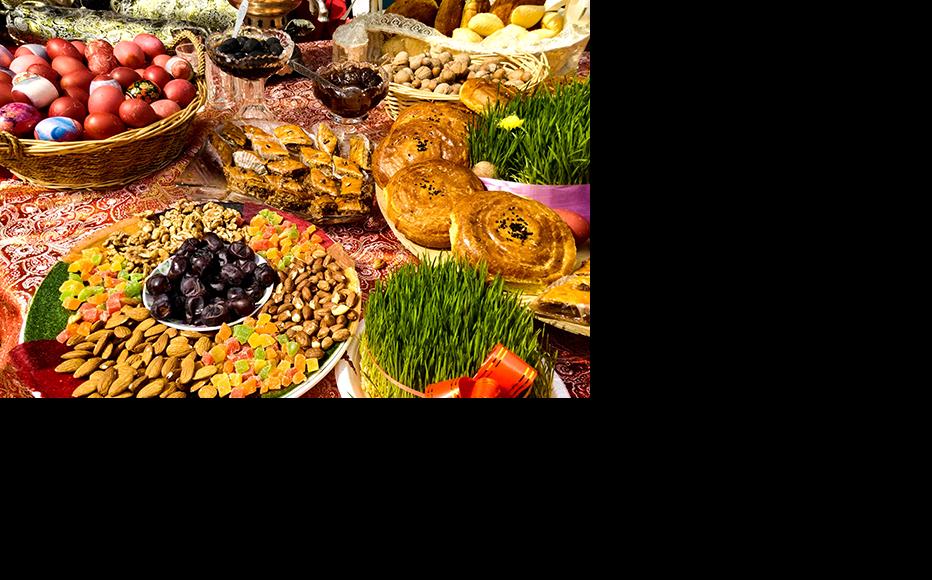 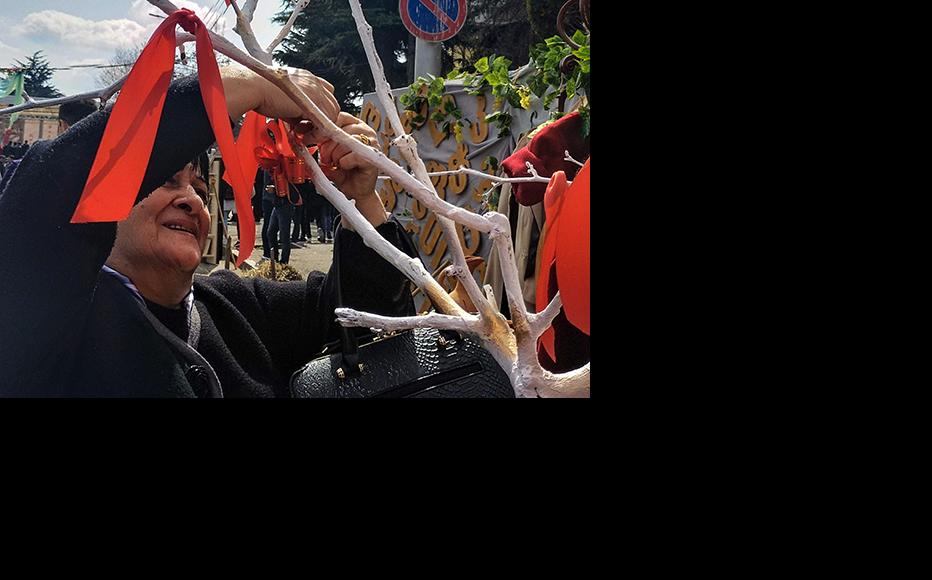 Azerbaijanis believe that if they hang red ribbon on a tree and make a wish it will come true. (Photo: IWPR Georgia) 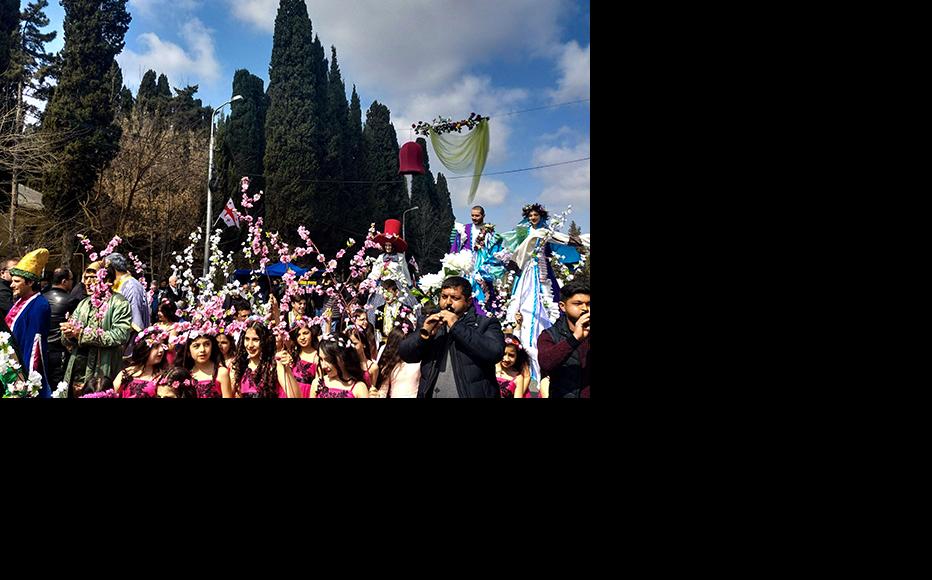 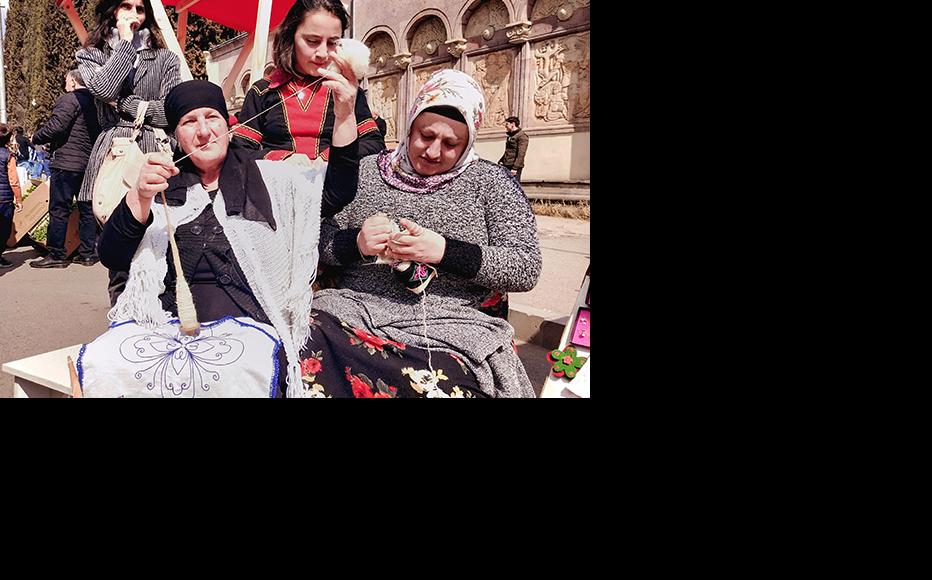 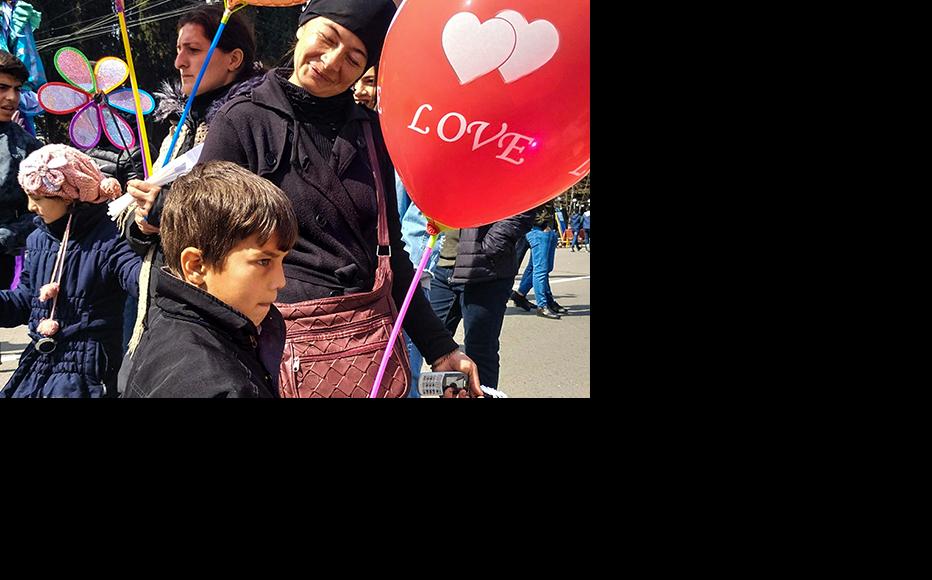 A mother and son at the Nowruz celebration on March 21. (Photo: IWPR Georgia) 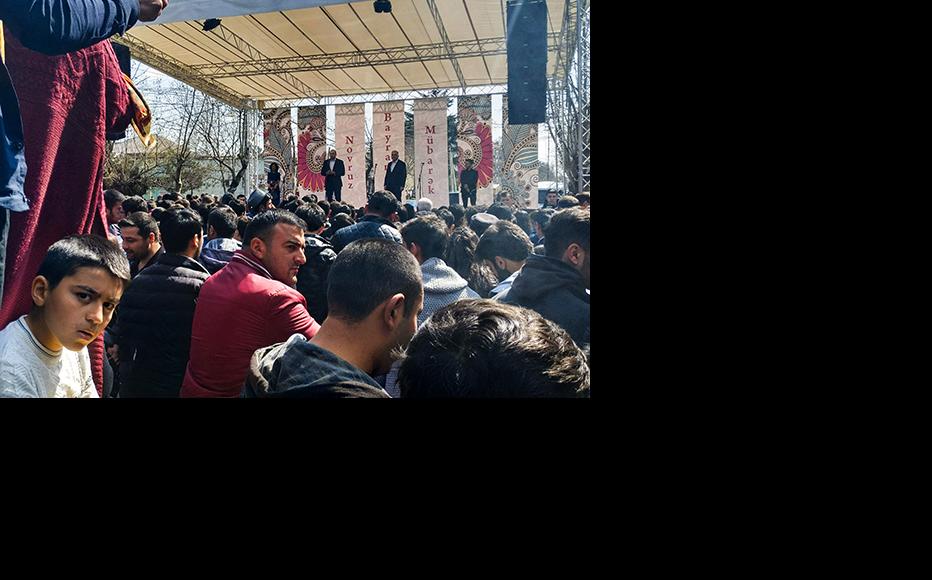 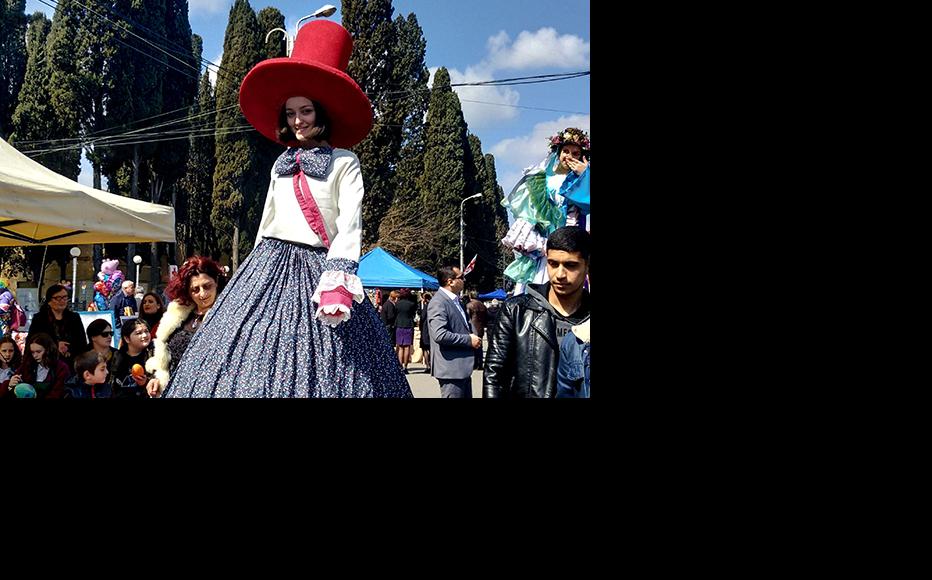 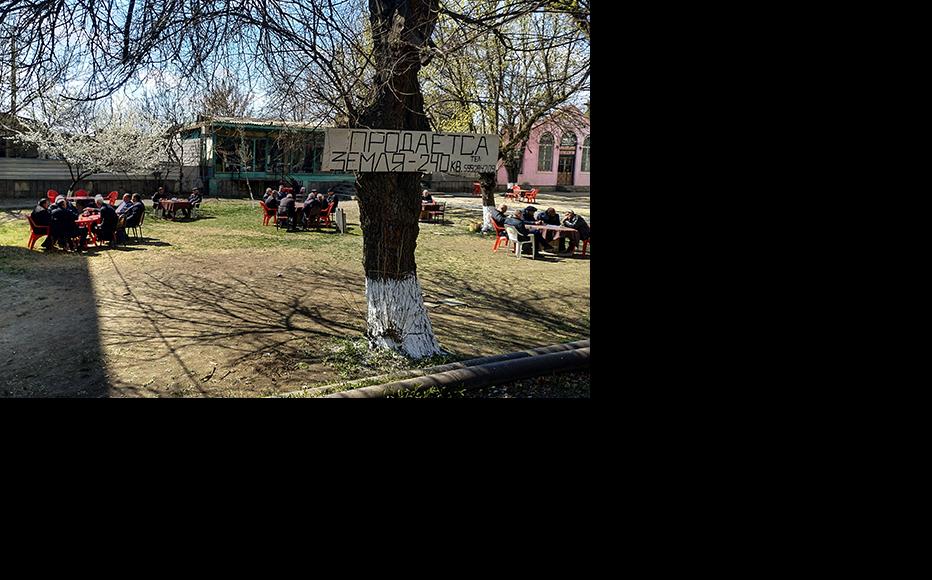 At a tea shop in Marneuli, men enjoy chatting with each other and play various traditional board games. (Photo: IWPR Georgia)
The link has been copied

There were lavish celebrations for this year’s Nowruz festival in Georgia’s largely ethnic Azerbaijani city of Marneuli in the country’s Kvemo Kartli region.

Although Georgia is mostly Orthodox Christian, the Persian New Year has been a national holiday since 2010.

Marneuli’s main street was closed to pedestrians on March 21, and there were concerts of both traditional Azerbaijani and Georgian music as well as folk dancing, food stalls and exhibitions of traditional crafts. Georgian prime minister Mamuka Bakhtadze also travelled to the city with a delegation of ministers and municipal officials to address the event.

But despite all these efforts, some locals say that the Nowruz festivities are just an attempt by the government to pay lip service to integrating ethnic Azerbaijanis, who represent the country’s largest minority group. Most of Marneuli’s 90,000 residents are ethnic Azerbaijanis.

Samira Bayramova, a civil society activist from the village of Algeti, said that the celebration had “lost its true soul and stopped being authentic”.

“These celebrations are done very badly,” she continued. “We can’t really feel the holiday at this event. The traditional Nowruz celebration includes different kinds of athletic competitions, different symbols, many small details that are lacking at this celebration managed by the government.

“They cannot realize that this is a national holiday, not a festival. It shouldn’t have been done this way,” Bayramova said, adding that she felt that the celebration was arranged more for the benefit of officials and tourists, rather than Azerbaijanis in Georgia.

Bakhtadze’s speech, for instance, was delivered in Georgian language, which many local residents do not speak.

“All information about the event is in Georgian, while 90 per cent of the Azerbaijani population here can’t understand it. For this reason, fewer people join the event every year. Locals cannot feel like the celebration is dedicated to them,” Bayramova concluded.

Ethnic Azerbaijanis make up more than six per cent of Georgia’s population and mostly live in the Kvemo Kartli region, although some do live in other areas including the capital Tbilisi.

Tamta Mikeldaze, equality policy programme director at the Human Rights and Monitoring Centre (EMC), said that the community experienced a low level of social inclusion and political representation. She said that the state often seemed to view ethnic minorities as a security risk, which threatened any process of integration.

She also described a “folklorisation policy” that presented the culture of ethnic minorities “in a very superficial and romantic way”.

“Nowruz is a typical example of folklorisation, when government officials visit this region, make statements and expect minorities to accept their presence there,” she continued. “These statements are apolitical, drained from any idea and strategic plan on how to improve the lives of ethnic minorities in Georgia. Sometimes it even takes the form of kitsch.”

Tinatin Gogheliani, head of the department for civil integration at the ministry for reconciliation and civic equality, acknowledged that the inclusion of ethnic minorities remained a challenge, but said that there had been significant progress in recent years.

“The state’s priority is to support the rights of ethnic minorities, ensure equality and their complete integration and active involvement in society. On the other hand, it is important that we keep their cultural identity and popularise their culture,” Gogheliani continued.

She cited the state strategy on civil equality and integration’s 2015-2020 action plan, which includes issues such as political engagement and access to higher education.

“The situation cannot change radically in few years. It is a fact, anyone can confirm it and it is impossible not to see that the process leads in the right direction.”

One issue that hampers integration is the marked level of gender equality in the community. Mariam Gvidiani, from the Public Defender of Georgia’s gender department in Marneuli, said that while the rights of women were violated all over Georgia, the worst conditions were found in the Kvemo Kartli region.

Early marriage is a particular problem. Georgia outlawed early marriages in 2017, although they still continue.  According to the latest report by the Public Defender of Georgia, 115 cases of early marriage were recorded in Georgia in 2018.  In addition, 715 girls and 23 boys became parents that year.

These statistics are unreliable, however, and the figures are likely to be higher. Gvidiani said that most cases of child marriage originated in this region.

“Girls are not considered a priority for the family. There is more focus on boys. Often, the family of a teenage girl arranges the marriage and engagement without even asking her opinion. However… they try to find a boy from a wealthy family to guarantee a better life for their girls.”

Within this conservative, male-dominated community, women feel unable to speak openly about their problems. In cases of domestic violence, women are often blamed.

“This is one of the main reasons why women do not approach the relevant organisations for help,” Gvidiani continued. “As a result, they are at higher risk. Often, I consult women who call us informally. On one hand, they do not want their names to appear in reports, but on the other hand, they need to speak out.”

Kamilla Mamedova, who heads the local radio station, said that girls are raised to be publicly submissive to male family members.

“In fact, I know many women who are leaders and decision-makers in their families, but they never show it publicly. The reason is not to offend their husbands, who are considered to be leaders,” she said.

“Women are not represented in village trustee positions,” agreed gender expert Nona Samkharadze. “Women are not involved in decision-making processes even at the local level, they believe that it is men’s business to solve problems… Another problem is that they blindly follow traditions and do not see problems in early marriages and women's rights, as they consider it to be respecting the traditions passed down the generations.

“On the basis of some training courses, the situation has changed slightly, but as soon as civil society will reduce attention these problems will explode again. We need to keep the control of these issues."

Some community members are making a difference, particularly in the field of education. Local activist Kamran Afandiev transformed his garage in the village of Khuldara into a library with the help of some friends. This then became an educational centre for young people, and similar projects were set up in the villages of Sadakhlo and Malaoghli to help prepare teenagers for higher education. Afandiev went on to found an NGO to implement larger educational projects.

“This year we have 17 students preparing for higher education and among those six are girls. I am very proud to see that girls trying to fight for independence,” he said.

Afandiev said that his biggest challenge had been to convince parents to give permission to female family members to attend classes.

“Nowadays, young people mostly know their rights and they have their plans, but the problem is their parents, who are very conventional,” he said. “When I started these centres, I personally visited every house and convinced parents to let the girls join us. Somehow, I won their trust and as a result, early marriages in my village are very low.”

Giving Voice, Driving Change - from the Borderland to the Steppes
Georgia
Culture, Life, Women's rights
Connect with us