Tbilisi hopes that 800 million US dollar investment will boost energy security and provide jobs, but activists say the risks are enormous.

Critics say environmental and human costs are too high.

Tbilisi hopes that 800 million US dollar investment will boost energy security and provide jobs, but activists say the risks are enormous. 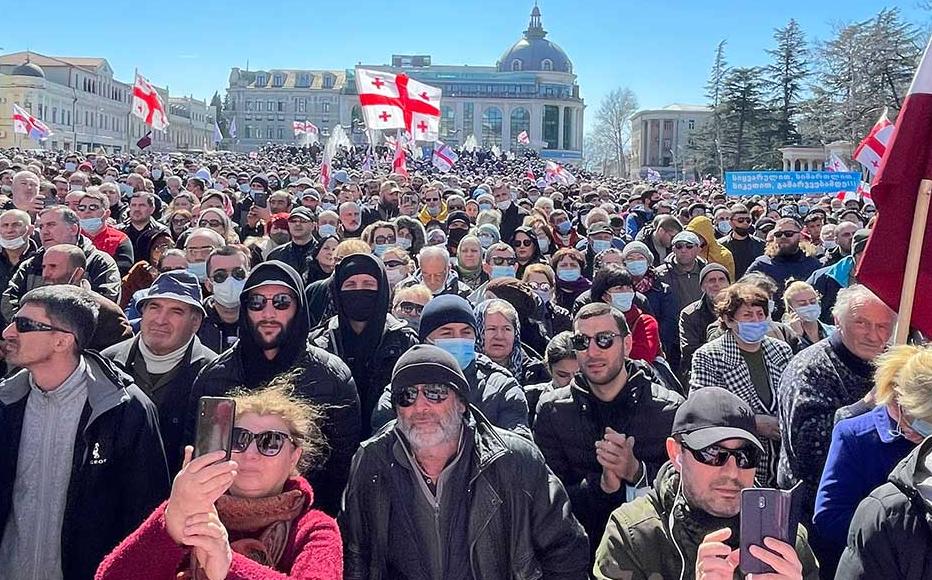 Protestors gather in Kutaisi for another rally against the Namakhvani hydropower plant. © Sandro Beraia
The link has been copied

Fierce opposition is continuing to grow against the construction of a controversial hydropower plant (HPP) in western Georgia, dubbed the country’s most ambitious energy project for three decades.

On March 15, the city of Kutaisi hosted its second massive rally against the construction of the Namakhvani HPP dam over the Rioni River basin in the Imereti and Lechkhumi provinces.

Save the Rioni Gorge, a public movement leading the calls against the HPP, has vowed to step up its demonstrations if the Georgian government does not halt construction.

Turkish engineering company ENKA and Norway’s Clean Energy Group won the rights to build, own and operate the Namakhvani project in April 2019 via a Georgian government tender.

With a hefty investment of 800 million US dollars (2.66 billion GEL), the project will see the construction of two HPPs along the Rioni River with a planned total capacity of 433 MW and an annual output of 1,514 GWh. As part of the procurement, 600 acres of state-owned land were transferred to the Turkish construction firm for a symbolic fee.

However, some locals argue that they were deliberately excluded from public discussions related to the construction. They warn that that geological factors - including potentially disastrous seismic and landslide risks – have not been adequately researched, and that land had been transferred from residents without their consent.

Davit Chipashvili, one of the leaders of the environmentalist Green Alternative CSO, said that Georgia did not take the necessary safety procedures seriously enough when it came to HPP construction.

“For some reason, signing contracts, transferring land and granting construction permits take place ahead of studying the relevant risks,” he said.

He noted that the Shuakhevi HPP, in the southern region of Adjara, had received a positive risk assessment ahead of construction but had to halt operations just two months after it began functioning after its derivative tunnels collapsed.

However, supporters of the project argue that the project’s dangers had been overstated while its benefits - including sizable foreign direct investment, boosting Georgia’s energy security and the prospects of employing some 1,800 citizens - were clear.

Executive director of the Georgian Renewable Energy Development Association (GREDA) Giorgi Abramishvili said the risks associated with construction of the HPP had already been studied comprehensively during the Soviet era, adding that “not much has changed geologically in the Rioni Gorge since”.

He stressed that Studio Pietrangeli, an Italian hydropower engineering consulting firm, also assessed the risks ahead of the tender in 2011, as had Swiss-based Stucky consulting company earlier in 2007, with both giving construction the go-ahead.

For nearly five months, activists and concerned local citizens have been maintaining a protest camp in the village of Zhoneti near the HPP construction site.

With the movement having garnered significant popular support, the government deployed economy minister Natia Turnava and environmental protection minister Levan Davitashvili to meet the activists to hear their concerns.

But their talks came to an abrupt end on March 5 after representatives of the Save the Rioni Gorge Movement claimed the government had no real intention of meeting any of its demands.

Varlam Goletiani, a spokesman for the movement, argued that the government had purposefully exaggerated the benefits of the HPP project.

He said that the foreign direct investment of 800 million dollars, frequently cited by government officials as a much-needed boost to the Georgian economy, would not have the desired impact.

“The technical equipment necessary to construct the infrastructure, the dams, and the reservoir [of the Namakhvani HPP] is simply not produced in Georgia,” Goletiani said, noting that a significant chunk of the investment would likely be spent overseas.

He added Georgia lacked the high-skilled workers and experts for the construction and operation of the project, which meant that the Turkish ENKA company would seek foreign labour instead of employing locals.

“It is automatically implied that our population will be employed in low-paid positions and in small numbers as well,” Goletiani said, adding that the Turkish company was under no formal obligation to employ Georgian workers.

“If it is more profitable for ENKA to bring in foreign workers, it can do so,” he said.

As for safeguarding Georgia’s energy security, Goletiani said that the contract between the government and ENKA only obligated the Turkish company to sell the electricity produced through the HPP locally for the first 15 years, while also annually increasing the fee by three per cent.

“Afterwards, the company is free to auction the electricity wherever it pleases should it receive a superior offer,” he said. “If ENKA has complete freedom to sell electricity however it pleases, Georgia’s energy-dependence is surely not guaranteed.”

“We [the Georgian population] barely profit from the project, and are forfeiting our national and collective interests to serve the interests of a small group of investors,” Goletiani concluded.

GRETA’s Abramishvili agreed that the company would likely seek high-skilled labour overseas due to the lack of appropriately qualified personnel in Georgia. He nonetheless argued that the construction and maintenance jobs created from the HPP would offer “improved wages” for the Georgians employed.

He also said that a significant chunk of the 800 million dollars foreign direct investment would directly benefit Georgia and help develop the Rioni Gorge.

“Between 30 and 40 per cent of the total investment will be spent on equipment purchased in foreign markets,” Abramishvili said, although he stressed that ENKA would have to pay customs duty, VAT and an annual property tax for equipment to the Georgian government.

He argued that the project would contribute to Georgia’s longer term energy independence.

“If we have an energy deficit, the price of energy in Georgia will be rather high,” he said. “This means that market principles will ensure that the electricity produced by the HPP is not exported but used locally.”

Locals continue to stress that environmental, economic and even cultural impacts have not been fully recognised.

Marita Museliani, one of the first to set up the protest camp in Zhoneti, said that the HPP construction would inevitably change the local environment.

“Local winemakers are saying that cultivating tvishi [a famed semi-sweet white wine] will no longer be possible as the Namakhvani project is causing strong microclimatic changes in the area,” she noted.

“Constructing the dam will bring both cultural and economic losses for our country that must also be taken into account,” she concluded.

Giving Voice, Driving Change - from the Borderland to the Steppes
Georgia
Environment, Protests, Civil society
Connect with us