Fears that key infrastructure could be absorbed into Russian-controlled territory. Police making sure its safe for farmers to tend their land in Gugutiantkari. (Photo: Nino Chibchiuri)

Fears that key infrastructure could be absorbed into Russian-controlled territory. 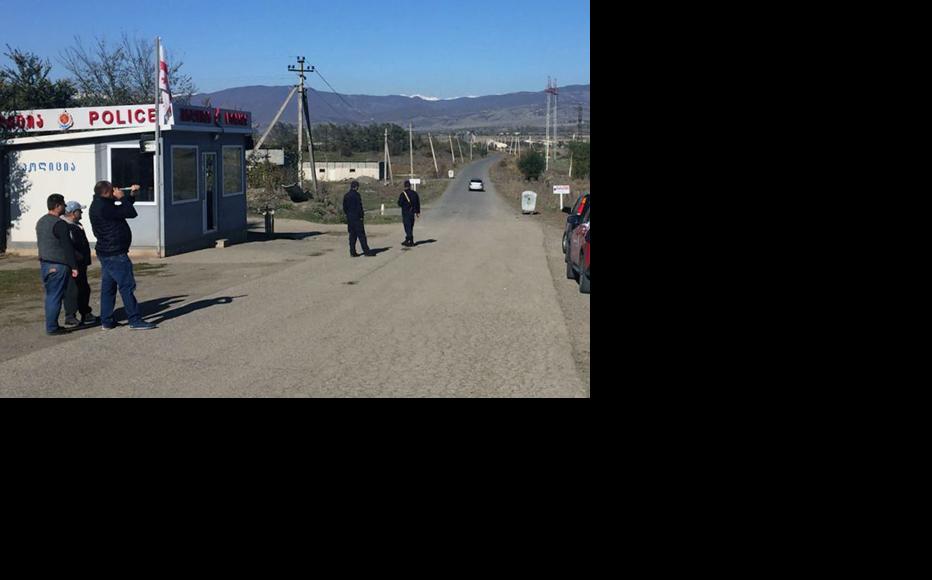 Village of Khurvaleti, which rests on the occupation line. (Photo: Nino Chibchiuri)
The link has been copied

Experts fear that Russia’s ongoing borderisation efforts in South Ossetia could threaten Georgia energy interests, with part of the Baku-Supsa pipeline now on the other side of the de facto border.

In September in Shida Kartli, Russian forces installed a watchtower in the village of Atotsi in Kareli municipality, as well as barbed wire fences in Nikozi in Gori and border signs in Khurvaleti.

Nodar Batonisashvili, a Khurvaleti farmer, told IWPR that his home was so close to where the Russian soldiers were erecting barbed wire that he was afraid he would soon be engulfed by the occupation zone.

“We have no more pastures left to feed our cattle and no land to cultivate,” he continued. “We fear that if we grow crops, Russian soldiers will come, as they did before and warn us not to get closer to the marked area so we will not be able to gather the harvest. Where are we going? No one knows what fate awaits us, but the fact is that soon we will have to live under a siege of barbed wire.”

The area is key because parts of both the Baku-Supsa and Kartli-2 pipelines are now situated in the occupation zone. While the main power transmission line is still on Georgian-controlled territory, there are fears that it could soon be over-run.

Russian occupation forces first built a kilometre-long barbed war fence in the village of Khurvaleti in 2011. In 2015, several nearby villages were also surrounded. The border signs now sit just 300 metres from the central Tbilisi-Gori highway, between Tsitelubani and the occupied village of Orchosani.

Giorgi Badridze, a senior fellow at the Rondeli Foundation, linked the borderisation efforts to Russia's wider interests in the area.

“The situation is posing a threat to transport and energy infrastructure near the occupation line," he said. “Firstly, it is one of Russia’s oldest intentions to prevent the sustainability of Georgia’s sovereignty, and secondly it is a purely commercial interest, because energy exports comprise the largest share of Russia’s revenue and it is dependent on it.

“Any export from our region beyond Russia’s control is deemed as a loss [both] commercially and politically. Another element is the de facto government of Tskhinvali, which has the support of Moscow and might try to make some kind of claims over the control of pipelines and somehow benefit from it,” Badridze said.

“The Kremlin wanted Azerbaijani oil to pass through Russia via the North Caucasus,” Badridze continued. “Oil which does not belong to Russia is still considered by the Kremlin as a strategic raw material, and it is still trying to control it. As for the Baku-Supsa pipeline, there are sporadic rumors in Tskhinvali that the Tskhinvali administration wants to use this pipeline.”

Due to the Nagorny Karabakh conflict between Azerbaijan and Armenia, a bypass route was built through Georgia. The Baku-Tbilisi-Ceyhan (BTC) pipeline, in operation since 2006, is Azerbaijan’s main oil export route.

“The Baku-Supsa oil pipeline is not really crucial for Georgia from an economic perspective at this moment, but from a historical point of view it was the predecessor of the Baku-Tbilisi-Ceyhan pipeline,” said economist Lado Papava. “The Supsa pipeline brought development to Georgia and gave it the function of a transit corridor. It has always irritated Russia that Georgia has created an independent transit corridor without Russia’s involvement. It is not surprising that Russia is approaching us through creeping occupation, which is also about Russia’s general policy in the Caucasus and with Georgia in particular.”

Former US assistant secretary of state David Kramer said that Georgia should stand firm over the Baku-Supsa pipeline.

“The Baku-Supsa pipeline is inside the occupation line,” he continued. “Georgia must not seek alternatives but must maintain a tough position to keep complete control over the pipeline. Georgians should not be damaged by this outrageous move of Russia. The search for alternatives must be carried out quietly and no loud statements must be made about it.”

Some 20 Georgian NGOs have appealed to Tbilisi to take action over the possible threats to the pipeline. They argue that if retaliatory measures are not taken with the support of international partners, the occupation line could extend to include Georgia’s central highway.

David Katsarava, who heads the local anti-occupation movement, said that there was a growing list of key infrastructure developments that had been lost to occupation.

“An oil pipeline has been crossed by the occupation line between the village Zemo Rene in Kaspi municipality and the village of Khurvaleti in Gori municipality,” he continued. “Several towers of Kartli-2 are beyond the line as well. Near Chochana, the line has approached the pipeline and pumping station, which provides oil transportation for the Agara-Zestaponi mountain section.”

Water is another resource threatened by the occupation. After the 2008 August war, access was lost to a significant amount of water resources.

“At least half of the water-supply facilities are located in the occupied territories,” Katsarava continued, including reservoirs vital to villages in the Liakhvi and Ksani valleys. This meant that Tbilisi had been forced to build several new pumping stations to supply the area.

“The Tirifoni irrigation canal is a separate issue because it is one of the most important ones in Georgia,” said Amiran Kristesiashvili, deputy governor of Shida Kartli. “It was supplied from the river Liakhvi and its distribution dam was located in Tskhinvali. The farming lands in Gori and Kaspi municipality were irrigated through the Tirifoni canal, which unfortunately is not possible today.”

According to official data, 3,800 square kilometres of ​​the Tskhinvali region are currently occupied, with the total length of the occupation line exceeding 350 km. Following the 2008 war, 103 villages in the area fell under the control of the Russian occupation forces.

Giving Voice, Driving Change - from the Borderland to the Steppes
Georgia, Abkhazia
Land, Oil, Conflict
Connect with us