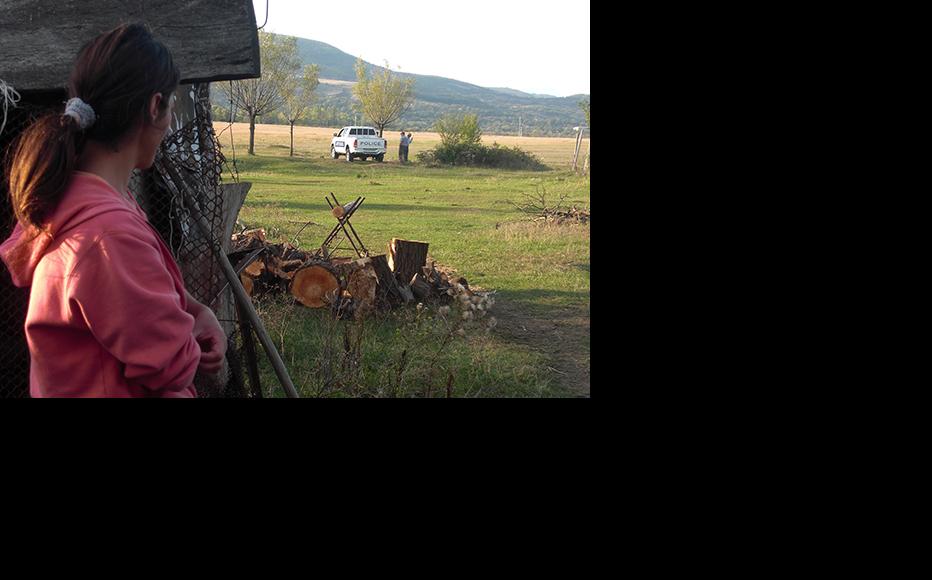 Police making sure its safe for farmers to tend their land in Gugutiantkari. (Photo: Nino Chibchiuri) 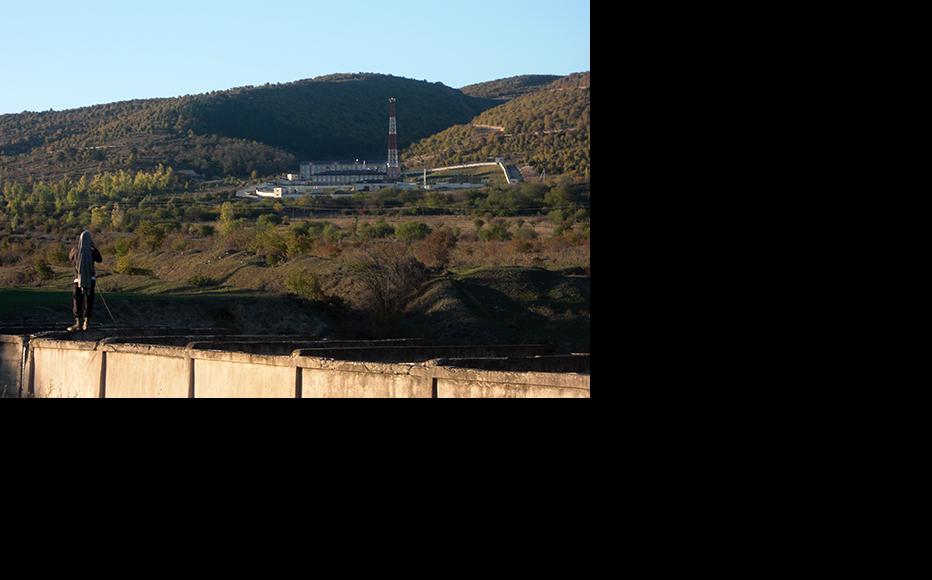 A Russian Military Base in Gugutiantkari. (Photo: Nino Chibchiuri)
The link has been copied

Local residents say that Russian occupation forces are taking advantage of the coronavirus crisis to increase their occupation of territory around South Ossetia.

Russian troops stationed there - and in the other breakaway territory of Abkhazia - since the 2008 war have increasingly been encroaching on land held by Georgia by building artificial barriers, barbed wire fencing and trenches.

Moscow recognises both territories as sovereign states, although Tbilisi and most of the international community reject that and hold that South Ossetia and Abkhazia fall within Georgia’s national borders.

Around a fifth of the more than 500 kilometres of occupation line on the territory of Georgia is now composed of these illegally built structures.

In one recent example in the village of Takhtisdziri in Kareli municipality, law enforcement officers had to prevent locals accessing their own farm lands due to concerns over the close presence of Russian troops.

Tengiz Elbakidze, 54, said that the only way he could support his family during the pandemic was through working farm land that he was no longer able to reach.

“I came to my own plot,” he said. “I wanted to cultivate it. I was about to get the tractor, but the police told me that I could not go there without them. They were carrying some devices and telling us how far it was safe to go. I can no longer enter my own plot, which I have been using for years. Our lands were seized earlier too, and now they are grabbing more. Some [villagers] have lost 20 per cent and some even 60 per cent of their lands.”

Nodar Kopadze, a representative of the municipality, urged locals to be cautious. He said that out of the 155 households in the village, the lands of 16 families were located beyond the line of occupation. His own land had been split in two by barbed wire fences erected by the occupation forces, Kopadze continued.

"I understand these people; I am in the same situation as they are,” he said. “But we have to listen to the police and follow their restrictions for our own safety. Illegal borderisation began in this village in 2013 and 250 hectares were occupied as a result. The world is fighting the coronavirus, but the occupation forces are not stopping.”

“Recently, new border marking signs have appeared near the villages of Dirbi and Takhtisdziri, that is why our law enforcement forces are checking everything with GPRS devices and only after that allow the locals to farm their lands. So far, Russian militaries have put up just a banner and the surrounding area is open, so spring agriculture works are carried out under police supervision,” Kopadze concluded.

The State Security Service of Georgia (SSG) informed the European Union Monitoring Mission about the borderisation in Kareli municipality.

“Such illegal activities significantly damage the security environment on the ground and affect the daily lives of local residents,” the SSG statement said.

Elsewhere, in Khurvaleti, there are more than 300 families living near the occupation line. Many have already lost access to their land due to the encroachment of Russian forces.

“Several years ago, Russians moved the banner into our territory and seized about 75 hectares of land,” said Gori municipality spokesperson Manana Tvauri. “Nobody enters that area alone. Since then, the locals have been farming their lands and gathering the harvest under police supervision. They did so last year and will do the same this year, to avoid any incidents.”

Last month the occupation forces set up new barbed wire fences in the village of Ergneti. Local resident Giorgi Kasradze, 27, said that this had severely affected his family, who were all currently unemployed. The constant presence of armed soldiers made the situation even more stressful, he continued.

"What shall we do, worry about coronavirus or how not to die of hunger?” Kasradze said. “The occupation forces are all around and we can't even move freely in our village. We are in a very difficult situation. We don't have money. We can't buy any seeds to grow something for winter. If the government does not help us, we either die of hunger or coronavirus.”

Residents of Gugutiantkari, another village along the dividing line, also saw several dozen hectares of land appropriated during April.

Villager Lia Mikeladze said that communities such as hers needed special attention from the government during the state of emergency. Most of the 250 residents of Gugutiantkari depend on agriculture for their livelihoods.

“[The authorities] bring some food assistance during the state of emergency, but this help is not for everyone,” she continued. “My husband and I were not given the status of a socially vulnerable family because we had a piece of land and we were considered employed. But now, according to the plan that has been presented, people who worked for 20-25 lari daily on their neighbours’ farms are not considered to be self-employed. As a result, we are not eligible for the one-time financial assistance.”

There are 58 villages across the country with the status of settlements along the line of occupation, all but two in Shida Kartli and the remainder in Zugdidi. They receive few special benefits apart from energy vouchers during the winter and university tuition fee subsidies. The crisis plan for the coronavirus state of emergency does not include any specific provision for these areas.

According to Keti Bebiashvili, head of the Georgian Young Lawyers' Association in Gori, this population faces unique challenges and needs special services during the pandemic.

“There are many unanswered questions about the [emergency aid] plan,” she continued, “For example, the category of self-employed does not apply to many people, including those living along the dividing line. These people have limited access to their own farm lands, but formally these lands are their property and potentially considered a source of income.

“The occupation is increasing and not decreasing, so these people are facing completely different social needs. Even before the pandemic we were saying that the population in these villages needed special status, and now their living conditions became even more difficult,” Bebiashvili concluded.

The Anti-Occupation Movement, a group of activists led by Davit Katsarava, use drones to monitor the movement of Russian troops along the dividing line.

“Unfortunately, the pandemic did not stop the occupation forces,” Katsarava said. “We are aware about two new areas of borderisation. One is in Gugutiantkari, where several dozen metres of fencing were put up by occupiers. Another is in Takhtisdziri. We were informed that the occupiers are carrying out works in other villages as well. They are trying to fence a part of the road near the village of Koda. Occupying forces have also been intensively working in Ergneti, they have built new fences inside the existing ones.”

The creeping occupation of Georgian-controlled villages has intensified since 2011. According to the SSG, the total length of the occupation line in the occupied Tskhinvali region is 353 km. Barriers have been erected by Russian occupation forces for 53 km around villages in Dusheti, Gori, Kareli, Kaspi, Khashuri, Oni and Sachkhere municipalities. In Abkhazia, the length of the line is about 145 km, with more than 49 km of Russian barbed wire fencing and trenches.

Coronavirus Pandemic, Giving Voice, Driving Change - from the Borderland to the Steppes
Georgia
Land, Rule of Law, Coronavirus
Connect with us