Hundreds of thousands of displaced people have been living in dire conditions for decades. 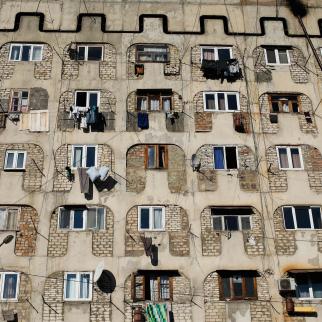 Kartli was built in Soviet times as a sanatorium for patients with heart conditions. As hundreds of thousands of Georgians fled Abkhazia at the end of the conflict in late 1993, authorities allocated about 200 families housing there in what was supposed to be a temporary measure. Thirty years on, 130 are still there. © David Mdzinarishvili

The death of an IDP has reopened the debate on the dire conditions people originally from Abkhazia have been enduring for decades.

Hundreds of thousands of displaced people have been living in dire conditions for decades. 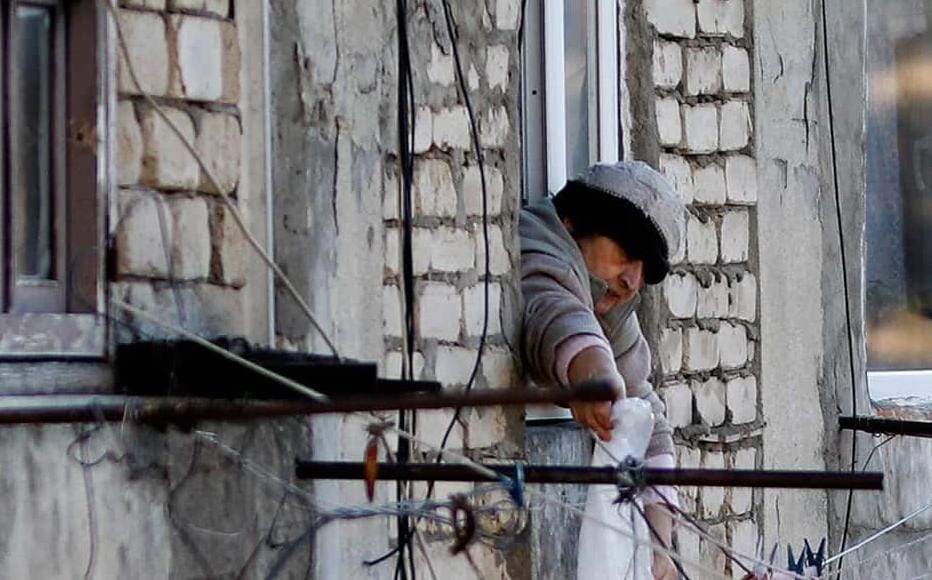 An internally displaced woman from Abkhazia hangs laundry from the window of her room in Kartli. © David Mdzinarishvili
The link has been copied

Zurab Kiria grew up in the region of Abkhazia, on the shores of the Black Sea. Displaced by war in 1993, he was in his 20s when arrived in Tbilisi in late 1993 and was housed in a 14- metre-square room in Kartli, a former Soviet-era sanatorium.

For almost 30 years he waited to be assigned proper accommodation.  On January 16, the 52-year-old had had enough. He took his own life in the now-crumbling building.

His death reopened the debate about the conditions in which hundreds of thousands Georgians displaced from Abkhazia have been living for decades.

Following wars in the early 1990s, about a quarter of a million Georgians fled the separatist regions of Abkhazia and South Ossetia. The government responded to the sudden influx of displaced people by allocating public buildings such as sanatoriums, schools and hotels as temporary shelters.

It was stopgap solution, with no long-term strategy, in the belief that the displaced would be able to go back home. As the years passed, the temporary became permanent. People’s hopes, to either return or build a new life in a real home, faded. The interim shelters, like Kartli, the building where Kiria lived, slowly rotted away.

Kiria, who a few years ago changed his surname to Chichoshvili, had been alone since wife migrated to Europe for work with the couple’s daughter. His neighbours said that he took his life in an act of desperation.

However, the government’s first assessment was that his death was an accident. Zurab Azarashvili, minister for internally displaced persons (IDPs), labour, health and social affairs initially asked “to wait for the investigation and not to link it to the IDPs problem.”

Kartli residents, all IDPs, have for years been protesting in vain about the unbearable conditions and asking for an alternative location. The latest problem came in December 2021 and early January, a few days before Kiria died, when some corridor walls collapsed .

In a video seen by IWPR, Davit Patsiatsia, minister for IDPs in Abkhazia’s government-in-exile, talks to residents in front of the Kartli building on January 14. Kiria’s voice can be heard saying, “I will go up [on the roof] and jump.”

“He lived here for 29 years and was not included in the [housing] list because he was not in his room during two random inspections,” Irma Nachkebia, a neighbour, told IWPR, referring to the visits the Ministry carries out to maintain the IDP register and the access to benefits it entails. “He asked to be included in the list. When they came from the ministry, he kept telling them not to force him to commit suicide.”

The state provides a monthly allowance of 45 laris (15 US dollars) to each IDP, including to individuals born to families in displacement.

Aleko Tskitishvili, executive director of the Tbilisi Human Rights Centre NGO, thinks that Kiria’s death was the results of decades of inaction and neglect.

“If there had been a real, pragmatic plan, it would not have taken 30 years for IDP families to be properly provided with living spaces,” he told IWPR. “The government’s measures are always temporary and fragmented. It starts to act only when there is a social fire, which has to be extinguished. The government did not offer any real solution, until the man [Kiria] protested in an extreme way.”

NOT BUILT TO LAST

Kartli was built in the Soviet era as a medical centre for patients with heart ailments. The rooms were meant for no more than two people and for short stays. Yet, in many cases they now house entire families.

“In Sokhumi, I left a three-bedroom apartment and two-storey house,” Nanuli Shulaia told IWPR. “When we came here, I started crying – how could we fit into one room? My mother-in-law reassured me that we’d survive here a few months and then go back home. I was 32 years old then. Now I am 62.”

The sprawling building is in a desperate state. There is no gas heating and electric heaters and wood-burning stoves cannot dry out the deeply damp walls. The foundations are unstable and water infiltrations are slowly sinking the building. Some residents refer to the building as “the Titanic”.

"We cannot trust the government.”

The latest governmental assessment, released in February 2015, reported that “the dilapidation process …in the basement, could lead to massive collapse of the load-bearing structures of the building in the future.”

But nothing was done to relocate the 130 families living there.

“Who cares about how and in what conditions we live?” asked Diana Davlianidze, who originally hails from Ochamchire, a town on the Black Sea coast about 50 kilometres south of Sukhumi. “In the pandemic, when the subway and public transport stopped, no one from the government ever asked after us. Everyone here lives in extreme poverty.”

According to government figures, 286,442 people or 92,079 families, are registered as displaced – roughly seven per cent of the country’s population. The vast majority hail from Abkhazia, while others fled after the 2008 conflict with Russia over Georgia’s other breakaway region of South Ossetia. Only about 46,000 families have received housing.

Most of them live in buildings in conditions similar to that in Kartli. In 2020, the Public Defender’s Office reported that 71 out of the 90 buildings housing IDPs in Tbilisi, the central Georgian town of Tskaltubo and the western town of Zugdidi - near the border line with Abkhazia - posed serious risk to life and health.

In August 2021 the government announced a four-year resettlement plan for IDPs which foresees the construction of 8,000 apartments, the purchase of 5,000 houses and the dismantling of up 80 decrepit collective centres.

Following Kiria’s death, the authorities offered Kartli’s residents the possibility to either search for apartments themselves that the state will purchase for a maximum value of 550 dollars per square metre, or to wait for the construction of new apartments, to be completed by the end of 2022. Before that they could rent apartments and the state would cover the cost for one year for up to 300 laris (100 dollars) per month.

While some families have taken the opportunity, most residents remain sceptical.

“The government gives us 550 dollars per square metre; they also say that we must find a house which is already finished… We’re looking for apartments in the outskirts, not in the center of Tbilisi, but the minimum cost per square metre is 700 dollars,” Davlianidze said.

“If we [all] leave this building, they will bulldoze and demolish it,” 54-year-old Maluza Baghbaia, who lives in Kartli with her 38-year-old son, told IWPR. “They will pay for the rent for a couple of months and then will stop it and we will end up on the street. We have thousands of such examples. We cannot trust the government.”