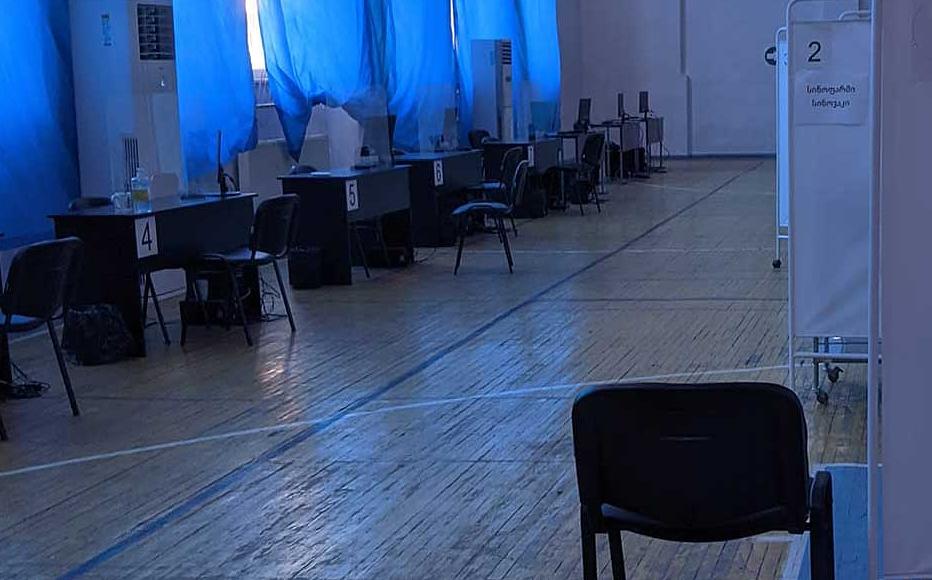 An empty COVID-19 vaccine center in Tbilisi in late October. Georgia finds itself lagging in getting its population immunized, casting doubt on whether authorities will reach the goal of vaccinating 60 percent of the country's 3.7 million people by the end of 2021. © Rusudan Jakeli
The link has been copied

When the vaccine against Covid-19 became available in Georgia, Lia Kvirikashvili was hesitant and sought advice from her priest.

He, however, refused to give her his blessing to take the vaccination, insisting that it contained the “remains of an aborted foetus”.

The 52-year-old woman decided not to accept the jab.

“With or without Covid-19, when I will die and will face God for his judgment, I would like to be true to both God and myself,” she told IWPR.

Widespread disinformation is hobbling Georgia’s already troubled efforts to contain the pandemic. The immunisation campaign had a slow start in the country of 3.7 million, largely due to the delay in the arrival of the doses. The roll-out began on March 15, but just three days later Megi Baqradze, a 27-year-old nurse and vocal vaccination supporter, died after receiving the shot. Preliminary investigations indicated she died as a result of anaphylactic shock triggered by the vaccine. Her death provided fuel for conspiracy theories and further scared an already sceptical public.

Georgians have a long-standing scepticism towards vaccines, which dates back to the Soviet era and worsened during the 1990s as wild corruption infiltrated the crumbling health care system. This reluctance remained strong in the Covid-19 pandemic. Online disinformation has magnified it, in particular, on social media networks like Facebook, hugely popular in Georgia.

Narratives vary and often have an anti-West leaning, with conspiracy theories including claims that vaccines have horrendous side effects, turn people into genetically modified beings, lead to infertility, increase the rate of miscarriages and even serve to inject microchips.

While the Orthodox Church, as the country’s most trusted institution, has a role to play in these efforts, Georgia’s doctors and nurses have also reportedly discouraged people from getting the jab.

“I have read many articles on the internet about Astra-Zeneca and Pfizer vaccines changing your DNA,” said Ia Mghvdliashvili, a resident of Dedoplistskaro in eastern Georgia. “My district’s doctor told me the same and advised me not to get the vaccine.”

As a result, Mghvdliashvili said, trust in vaccines in her village was close to zero and no one in her family is or plans to get vaccinated.

Experts note that the anti-vax movement is well organised and financed, with claims often posted as adverts and shared widely by trolls on hundreds of pages. Tbilisi-based think tank Democracy Research Institute (DRI) monitors articles, posts and video material online in order to identify sources and messages, which often, it has found, originate in Russia.

“The disinformation campaign in Georgia is evidently pro-Russian… a part of the hybrid warfare,” said DIR’s director, Ucha Nanuashvili. “[It] actively spreads fake news on the effectiveness of the Russian vaccine [Sputnik] and alimenting conspiracy theories on Bill Gates, UNICEF, the United Kingdom and the United States,” he continued, adding that pro-Russian media platforms, like Georgia and the World and the Georgian Information Agency were active actors.

Claims that the US created the virus as a tool to reinforce their hegemony over the world are common alongside descriptions of the vaccines as bio-weapons created in the West. According to this theory, UNICEF uses Georgia as a testing ground.

“The main goal is to revive anti-Western sentiments in the society and embed fear, uncertainty, and distrust towards the vaccine. This goal was supported by the government’s pitifully limited information campaign,” Nanuashvili said.

The slow pace of immunisation efforts worries public officials. The government is likely to miss its stated goal to vaccinate 60 per cent of the adult population by year end – as of October, 30.5 per cent have received the jab, according to official data.  In late September, the head of the National Immunisation Council, Ivane Chkhaidze, said the government target was “a complete fantasy”.

Georgia has also seen an uptick in Covid-19 transmissions since August, with thousands of new cases recorded daily. The increase has put the health system under pressure – planned surgeries have been postponed indefinitely and treatments for people with chronic diseases delayed.

Thus far, the government has averted a full lockdown to avoid hurting the struggling economy, but it has imposed tight restrictions on mass gatherings, public transport and school and university attendance.  A full closure may return should Georgians continue to shun taking the shot.

“The slowing-down of the vaccination rate is obvious, and this creates a serious basis for alarm and debate. If this tendency isn’t reversed …the risk that Georgia will not be able to handle the pandemic by the end of the year is very high,” Chkhaidze warned.

The immunisation rate is particularly low among the over-60s and is lagging among students and young adults, according to Paata Imnadze, head of the National Disease Control Centre.

“Disinformation about the vaccine preventing to have children has really hindered the vaccination among young adults,” he said.

In September, the government launched Get Vaccinated and Win as part of its strategic communication to support the vaccination rollout. Everyone who has received at least one dose can participate in the daily draw of 100 and 500 laris (32 and 160 US dollars ) and the weekly one of 1,000 to 10,000 laris (320 and 3,195 dollars). A final prize of 100,000 laris (32,000 dollars) will be drawn on December 31. Handing out cash, however, has had a limited impact in establishing trust and calls to raise the bar have increased.

“About 12 per cent of the population is categorically against vaccination, and no matter what, we won’t be able to convince this group,” public health expert Akaki Zoidze told IWPR. “33 per cent are sceptical – these are the people who we haven’t been able to convince, who have fallen victims of disinformation and are hesitating.

“Convincing them is possible and necessary,” he continued. “[Officials] went door-to-door for the elections, they have to do the same now and provide information and vaccines to each village, to each individual.”

UNICEF Georgia confirms that strategic communication is effective with the undecided.

“We held around 20 meetings in mountainous Adjara [a region in western Georgia] with teachers and employees of the tourism sector,” Maia Kurtsikidze, head of UNICEF’s communications programme, told IWPR. “The audience had very specific questions – they wanted to know if it was safe to get a vaccine if they suffer from diabetes or have suffered strokes. Their questions were answered by qualified and well-known doctors. After this meeting, 1,000 people got vaccinated.”

Similar awareness activities are planned for up to 4,000 medical staff, including medical school students and nurses.