Like the unpopular bridge in the capital, President’s Saakashvili vision of Georgia hasn’t quite captured the public imagination.

Like the unpopular bridge in the capital, President’s Saakashvili vision of Georgia hasn’t quite captured the public imagination. 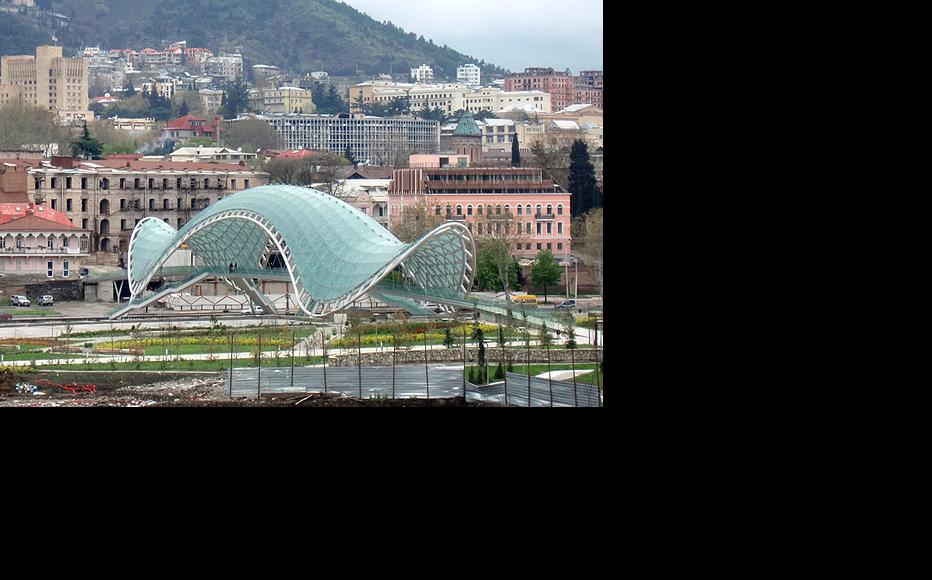 The Bridge of Peace spans the Kura river in Tbilisi. (Photo: Daniella Peled)
The link has been copied

As you stand by the historic Metekhi church perched on a clifftop in the heart of Tbilisi, the panorama of the Old Town is spread out before you.

To the left is the ancient Narikala fortress and below it, tumbledown houses crowd the slopes leading down to the famous sulphur bathhouses.

To the right, a statue of 5th-century King Vakhtang Gorgasali and riverside buildings in warm shades of ochre and peach, all surrounded by mist-shrouded hills.

And in the midst of this picturesque faded charm, spanning the fast-flowing murky Kura river, is an ultra-modern 150-metre glass-and-steel structure known officially as the Bridge of Peace.

Unofficially, though, it is known universally in Tbilisi as the Always Ultra.

Designed by Italian architect Michele De Lucchi, and opened last year as a pedestrian bridge, the bow-shaped span – lit up at night with an interactive LED display – has proved decidedly unpopular.

“Nobody likes it – only members of parliament,” said Manana, a local resident in her fifties, in her artisan carpet shop in Tbilisi’s Old Town. “It was very expensive and nobody uses it. What was the point?”

Indeed, during my visit, it didn’t even seem to be functioning. My attempt to cross to the other side was barred by a policeman rather glumly patrolling in a drenched yellow raincoat.

Many don’t understand why the government is investing heavily in such extravagant building projects when potholes litter Tbilisi’s streets and its historic Oriental-style buildings quietly peel and moulder.

“You can’t believe how much people hate that bridge,” Nino, a twenty-something student, tells me in a nearby bar. An active member of an opposition party, she says that it was a typically flashy gesture by President Mikhail Saakashvili, who commissioned the same architect to design the large, egg-shaped glass dome that sits atop his presidential palace.

Saakashvili’s popularity - he won a stunning 96 per cent of the vote the year after the 2003 revolution - was once particularly buoyant.

And it’s undeniable that in the eight years since the Rose Revolution that toppled the administration of Eduard Shevardnadze, Georgia has undergone a frenetic process of investment and reform, pitching itself as a West-friendly European outpost in the Caucasus.

Even Nino concedes that life has improved in some respects under Saakashvili’s stewardship. “Before him, in Kutaisi, where I come from, we simply couldn’t go out of our houses at night,” she recalled.

His administration has launched far-reaching institutional reforms to boost the economy and promote business, as well as to counter the corruption which riddled Shevardnadze-era Georgia.

Part of this is symbolic – police stations, for instance, are now built with see-through outer walls as a representation of the apparent transparency within – but there also have been real gains, on a practical and everyday level. Motorists are no longer routinely shaken down for random on-the-spot “fines”, and judges are paid decent wages to prevent them being susceptible to bribes.

In terms of infrastructure investment, Saakashvili says that next year he plans to spend up to 800 million US dollars on the construction of roads alone.

Developing tourism, such as in the Black Sea resort of Batumi where the plans include cutting-edge architectural development including ten five-star hotels, is seen as a national economic priority.

“Saakashvili’s dream,” one Tbilisi journalist said, “is to make Georgia into a Singapore.”

And indeed this example is one that Saakashvili has returned to in speeches, citing Singapore’s liberal economic model as a blueprint for his country. He has stressed, though, that his country will not follow the Singapore’s illiberal political trajectory.

Others are not convinced. Many opponents point to deteriorating freedoms in the country and to the perception that at a much higher level, corruption continues apace and those in power can do as they wish with impunity.

“It really annoys me when Saakashvili pretends that this country is a democracy,” Nino said. “It isn’t.”

The media is dogged by allegations of political bias; a recent decision by the country’s regulatory broadcast body to prioritise licenses for entertainment rather than political programming was seen by some as an attempt to weaken dissent ahead of 2013 elections.

And not everyone is happy with the country’s economic direction, either. Nearly half the population lives outside the urban centres and depends on agriculture. Nationwide, unemployment remains high.

It is perhaps inevitable that disillusionment should follow when hopes for Saakashvili were so high. The 2008 war with Russia, when the West failed to gallop to Georgia’s aid, was widely seen as a big miscalculation on Saakashvili’s part.

Visitors still drive down the George W Bush highway linking the airport to the capital, but the feeling here is that the international community, particularly the United States, is prioritising its relationship with Moscow over that with Tbilisi.

And the gloss is long gone on Saakashvili’s reputation. A group of eight opposition parties have now called on the president to respond to their demands for electoral reforms by the end of May, and there are plans for street protests to begin on May 21. This is no idle threat – previous large-scale demonstrations in 2009 nearly paralysed the capital.

Despite the president’s best efforts, the perception seems to be growing that the Saakashvili vision of Georgia is ultimately – like the bridge that spans the capital’s river – a flashy ultra-modern facade that hasn’t quite captured the public imagination.

Peace
Connect with us