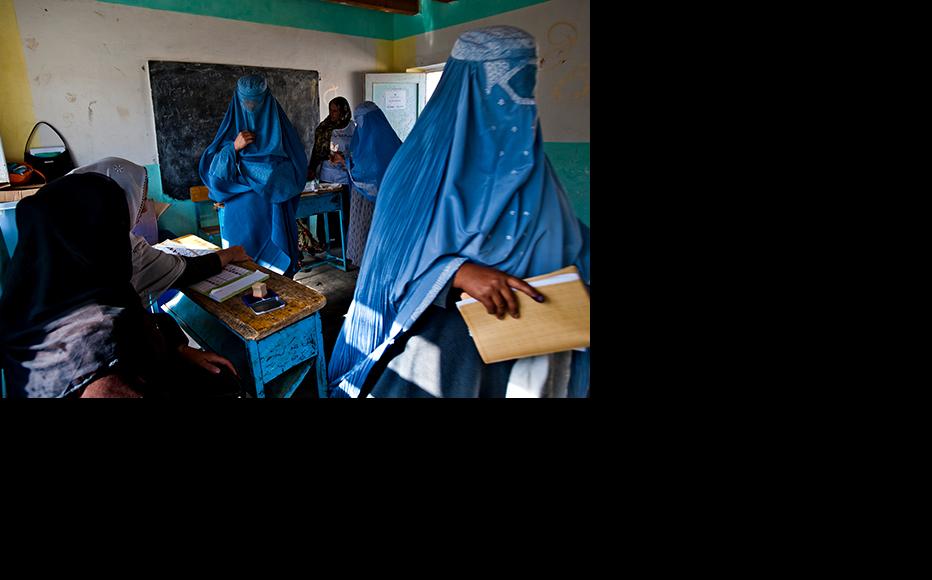 Women face widespread discrimination when it comes to political participation. (Photo: Lynsey Addario/Getty Images Reportage)
The link has been copied

Female candidates in October’s Afghan elections have been discussing the multiple challenges they face as women running for public office in a highly conservative society.

In addition to ongoing security concerns and public scepticism over the transparency of the entire process, women face widespread discrimination when it comes to political participation.

Most female candidates are located in Kabul, Balkh and Herat provinces, while some areas, including Nuristan, do not have even a single woman in the race.

Traditional mores in Afghanistan often militate against women even working outside the home, let alone running for public office.

“When I decided to nominate myself, my family immediately disapproved of my decision, with my close relatives then following suit by expressing negative ideas that as a girl, I would be unable to succeed,” explained Shahba Shahrukhi, a parliamentary candidate from Samangan province.

“[They told me] that there were too many problems, that this society and its traditions have always been against women who somehow make trouble for men. All these words and excuses were intended to change my mind, but I refused to accept this.”

Women from the capital Kabul had an easier task, she continued.

“In the provinces, the situation is different; a woman in the provinces has to overcome cultural issues, fight against her husband, father, brother and other close relatives, and even those women who are envious of her success and who don’t want her to overtake their own achievements,” Shahrukhi said.

The 2014 presidential elections were accompanied by widespread allegations of vote-rigging, leading to a stand-off that was only resolved when US secretary of state John Kerry stepped in to help negotiate a unity government agreement.

There are mixed hopes for these elections, with a low rate of voter registration not boding well for their legitimacy.

According to the Independent Election Commission of Afghanistan (IEC), as of June 5, 2018, more than five million voters had registered to vote, including 1.5 million women. Their aim is to register up to 14 million voters.

Political analyst Shekiba Parsa said that there was very little public enthusiasm for taking part in the entire process. He said that the chief problem was the lack of security, with people fearing that the deadly attacks on registration centres will continue.

There have been numerous attacks already around the country, and the Taleban have made it clear that they see anyone who participates in the process as a legitimate target. In previous polls, they have cut fingers off voters, who have them marked with indelible ink at the polling station.

Ordinary Afghans were unwilling to risk so much for an unsatisfactory election whose results might not be credible, Parsa continued.

“What will those groups, who do not accept the election process and call it haram [unlawful], do to those who wants to participate but live in the areas under their control? In the previous elections, some of our fellow countrymen lost their fingers but didn’t achieve the outcome they desired despite all their sacrifices.”

Parliamentary candidate Maryam Mahtab said that the election system in Afghanistan had always been flawed. The fact that tazkera were marked with voter registration stickers was itself problematic, she continued.

“These stickers on ID cards put people’s lives at risk because the militants reject the election process and will harm all those who’ve registered to participate in the elections and have stickers attached to their tazkeras,” Mahtab said. “Fearing this, most people won’t register, especially women because most of them even do not have national ID cards. [This means that] female candidates will not be able to count on the votes of other women.”

A female candidate in local elections in Takhar province was recently kidnapped by armed men.

Fazela, who is running for office in Darqad district in Takhar, was seized alongside her brother on June 5 as they travelled to the provincial capital Taluqan.

Khalil Aseer, the spokesman for Takhar’s chief of police, said that gunmen abducted them as they travelled through Alqanaq village in Darqad district. Their whereabouts were still unknown.

Khalida Ataee, a civil society activist in Takhar province and a prospective candidate in district council elections, said that Fazela’s abduction had been a shock.

“I was terrified, but I have still not changed my mind.”

Weeda Saghari, a parliamentary candidate from Kabul province, also said that she was determined to take part in the elections despite her own security concerns.

“I think the first problem is that a woman’s position in society is judged based on a religious viewpoint by which a woman should not lead any group. This is more so among people who are illiterate or have little education. Secondly, our society is patriarchal, so people rely more on men than women. Thirdly, women are economically weaker and dependent on men. Another factor is people’s low level of awareness about elections and the role of women in this process.”

Female candidates face further problems when it comes to running their election campaigns.

Naweeda Safdari, a parliamentary hopeful from Kabul province, said that women had fewer economic resources to draw on than men. This meant that their ability to campaign and lobby business leaders and local strongmen was automatically limited, which is in any case was already hampered by traditional norms.

“If women approach powerful figures and businessmen in order to seek their support, the first thing that may happen may be that they get the wrong idea and make sexual demands,” she said, adding that it was also common for people to sell their votes. Even online campaigning was harder for women, Safdari continued.

“In Afghanistan’s patriarchal society, it’s even difficult for women to campaign on social media because their photos are edited and misused on fake accounts to humiliate them.”

However, IEC officials say they remain optimistic about the prospective rate of participation, also arguing that male and female candidates were on a level playing field.

IEC commissioner Mazullah Dawlati said that he was satisfied with how the registration process was going, noting that more than five million had registered as of early June. This included 3.4 million men and 1.6 million women.

Minority groups were also participating, he continued, noting that more than 97,000 Kuchi nomads had registered and even around 500 memebrs of the country’s tiny Sikh population.

Dawlati said that candidates were given treated identically regardless of the gender, assuring the public that the process was fully transparent.

Afghanistan
Elections, Women
Connect with us