Moscow views peacekeeping efforts as an attempt to oust it from its previous role as sole mediator in the conflict. 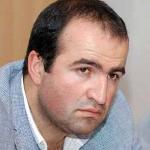 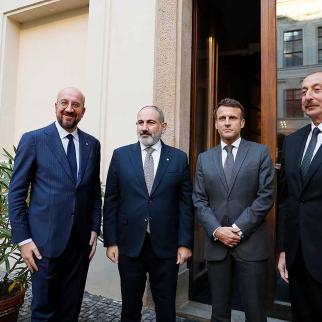 On October 6, Azerbaijani President Ilham Aliyev, French President Emmanuel Macron, Armenian PM Nikol Pashinyan, and EU Council President Charles Michel met in Prague on the side of the inaugural summit of the European Political Community. © The Prime Minister of the Republic of Armenia website, https://www.primeminister.am/

Moscow views peacekeeping efforts as an attempt to oust it from its previous role as sole mediator in the conflict. 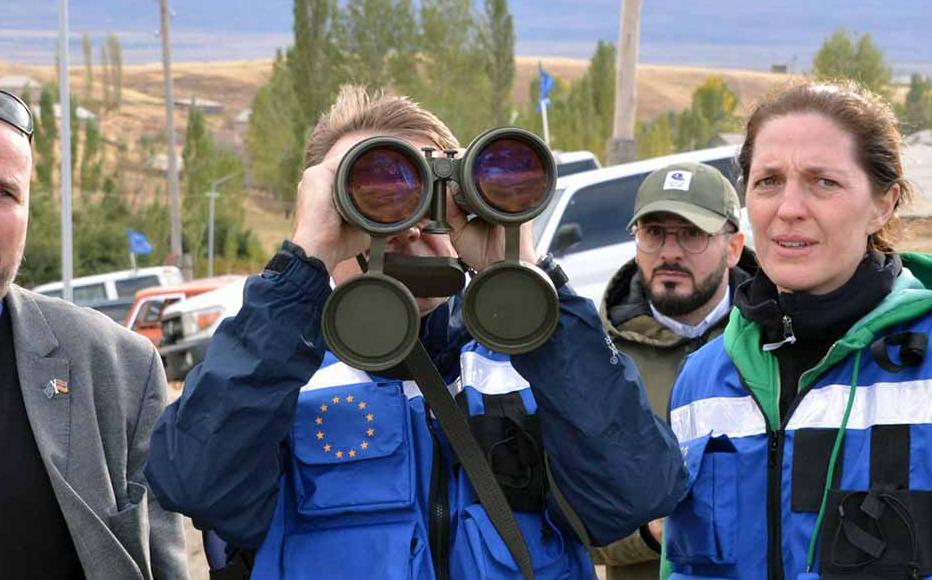 On October 18, a delegation of the European Union Technical Assessment Mission visited the settlements of Vardenis, near the border with Azerbaijan. The communities came under shelling during a new fighting outbreak in mid-September. The EU foreign ministers agreed to send a short-term observation mission to work on the border. © Karen Sargsyan
The link has been copied

The EU is poised to send a monitoring mission to the Armenian side of the border with Azerbaijan, the first international presence initiated by Paris and Brussels since the beginning of conflict in 1988.

Although the EU mission will only last for two months, Armenia hopes that it will help to stabilise the situation. In Moscow, however, the EU peacekeeping efforts are seen as attempt to oust Russia from its previous role as sole moderator in the Armenian-Azerbaijani process.

On October 17, the EU council decided to deploy up to 40 experts along the Armenian side of the international border with Azerbaijan “with the objective of monitoring, analysing and reporting on the situation in the region”. The decision was announced following the quadrilateral meeting of the leaders of Armenia, Azerbaijan, France and the head of the European Council on October 6 in Prague.

The mission, as the EU high representative for foreign affairs and security policy Josep Borrell stated, “will aim to build confidence to the unstable situation that is putting lives at risk and jeopardises the conflict resolution process”.  European observers are expected to assist in the process of border delimitation between countries that are not only in conflict over Nagorny Karabakh but have also yet to clarify their post-Soviet administrative borders.

According to Yerevan, the risk of the new escalation along the Armenian-Azerbaijani border remains high after heavy clashes last month - the most large-scale since the war in 2020. Dissatisfied with the passive response of the Russia-led Collective Security Treaty Organisation (CSTO), to which Yerevan appealed while hostilities were still ongoing, the Armenian authorities turned to the EU.

The EU, which since September 2021 has positioned itself as the main moderator in the Armenian-Azerbaijani conflict, responded surprisingly quickly to this request, despite its complex, multi-level bureaucracy. It deployed a technical mission to clarify the potential functions and powers of European monitors, hold meetings with the foreign and defence ministries and visit borderline settlements.

Due the rapid arrangement of the mission, it was decided to temporarily deploy EU monitors from Georgia. The exact date of deployment is unknown, but is expected to be soon.

Borrell said that “40 monitors will be deployed on the Armenian-Azerbaijani border very quickly, in the coming weeks” at the October 17 press conference.

Armenia hopes that the deployment of the EU observers will serve as a deterrent to Azerbaijan, which is pressurising Yerevan to sign a peace treaty.

“Firstly, the presence of about 40 EU monitors will ensure that no more incidents happen at the border at all or they won’t be of that scale as in September,” he told IWPR. “Secondly, given that we expect the intensification of the negotiation process in different directions [peace treaty, communications and border delimitation] the peace on the border will contribute to more constructive negotiation process than it is now, when Armenia is constantly under pressure.”

Gayane Abrahamyan, a former lawmaker who now chairs the For Equality NGO, recently visited Brussels for official meetings and deemed the EU initiative to be “a serious contribution to the peace process”.

“What we heard in Brussels during the meetings with EU officials is encouraging. I think that the aim of sending monitors is much more serious than just presence at the border,” she told IWPR. “I can’t reveal many details, the meetings were held behind closed doors, but it was clear that the EU takes this mission very seriously.”

According to her, the EU considers Baku’s demand for an extraterritorial corridor through Armenia with its exclave of Nakhichevan to be unacceptable, and also rejects attempts to demarcate the border through the threat of force.

Although Russia is focused on the war in Ukraine, Moscow still sees its role as an exclusive mediator in the Armenian-Azerbaijani conflict and considers the EU peacekeeping efforts as an attempt to seize the initiative.

“The idea of sending a civilian EU mission to the Armenian-Azerbaijani border is considered in Russia as another attempt by the EU to intervene by any means in the normalisation process and oust Moscow’s mediation efforts,” Russian foreign ministry spokesperson Maria Zakharova said during a briefing on October 11.

At a diplomatic summit in Astana on October 12, Russian Foreign Minister Sergey Lavrov offered Yerevan to convene the CSTO security council in order to send its own monitors to Armenia.

In response, his Armenian counterpart Ararat Mirzoyan explained that Armenia was waiting for monitors, “so far, however, such a meeting has not been agreed”.

Yerevan would like to see a political assessment from its CSTO allies regarding the situation on the border with Azerbaijan, but no statement has yet been forthcoming.

“First of all, we need to understand to what extent the organisation acknowledges the existing situation, ie aggression against the republic of Armenia and invasion into its sovereign territory,” Mirzoyan said during a joint press conference with his Norwegian counterpart Anniken Huitfeldt on October 18 in Yerevan.

According to political analyst Tigran Grigoryan, it is in the interests of Armenia to have international monitors along its border with Azerbaijan, since security guarantees associated with Russia have proved to be unsuccessful.

“The Russian border guards, to put it mildly, acted very passively during the September aggression of Azerbaijan,” he said. “And in this regard, it is unclear how the CSTO monitors will be different.”