Community has long borne the brunt of systematic discrimination, but now face violence from Islamic extremists.

Community has long borne the brunt of systematic discrimination, but now face violence from Islamic extremists. 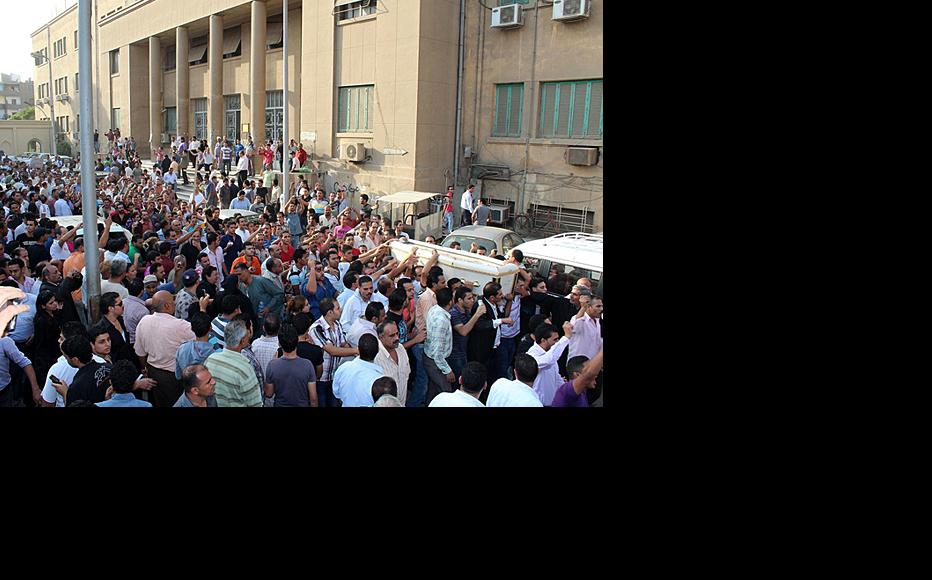 Mourners carry a coffin of a victim of the Maspero clashes with the army. (Photo: Bora S Kamel/Flickr)
The link has been copied

Growing hostility towards Egypt’s Coptic community since the fall of former president Hosni Mubarak endangers the future of this ancient community, observers say.

Coptic leaders say that although there is a long history of discrimination against them, under Mubarak’s 30-year rule they experienced a period of relative calm. Their religious leaders publically endorsed Mubarak, although they had little political power and remain under-represented in all state institutions.

Now, with a rise in Islamist movements, many Copts believe the Supreme Council of the Armed Forces, SCAF, are not only failing to protect their community but becoming complicit in violence against them - a charge denied by the military.

“Egypt is a lot more dangerous now for Copts than it was under Mubarak,” Helmy Guirguis, a Coptic activist and president of the UK Copts association, said.

Some warn that Egypt’s Coptic population, which constitutes at least ten per cent of the population of 83 million, could face a similar fate to their co-religionists in Iraq, whose numbers have plummeted over the last decade following attacks from militant Islamic groups.

According to Egyptian emigration statistics, more than 100,000 Copts have already left since January’s uprising, fleeing some of the worst violence against the community for years.

Over the last year or so, there has been a rise in attacks against Copts and their chruches. Most recently, in an October 9 clash with the army in the Cairo district of Maspero 26 people were killed and more than 300 injured. Protesters were demonstrating about the burning of a church in the southern village of El-Merinab .

“The military incited the violence and encouraged people to come and fight us by transmitting on state television that we were armed,” said Ben Stephan, a Copt who participated in the protest. “We had no weapons; it was a peaceful protest that turned into carnage.”

The army has denied any wrongdoing in the Maspero violence.

Michael Meunier, a Copt who recently set up a political party named Al- Haya (life) said, “Copts are so afraid now because it was the military who incited the violence and so they rightfully ask: who will protect us when we go to the polling stations?

“We want a future where Muslims and Christians are treated as equals and where the rule of law applies to both. Dialogue on its own is not enough.”

Dr Erica Hunter, a lecturer in Eastern Christianity at the School of Oriental and African Studies, said that prejudice towards the community has been long-standing.

“Copts will fear being marginalised further,” she said. “Their future looks very uncertain. I am not confident that Christians won't leave; they will be very fearful of what the Arab Spring might usher in. Irrespective of democracy, the region will be pro-Islamic in the long run.”

Guirguis cites the discrimination of Copts in the work place – with very few managing to find work as engineers, doctors or lawyers – as an example of their ongoing and systematic marginalisation.

“At the same time, Copts who run businesses are told by the ministry of interior to employ a certain number of Muslims,” he added.

Further evidence of discrimination against the Copts is the long-standing restrictions on building or refurbishing churches. A presidential decree is needed to build a new church, while even repairs to maintain a place of worship requires high-level approval.

The rules for followers of the Muslim faith are very different. As Hunter points out, “You can walk into any building and call it a mosque overnight.

“It's this disparity in regulations that is very revealing. Copts will fear being marginalised further and will look to Iraq where the population of Christians was once eight to nine per cent but is now down to just three per cent.”

Observers say a power vacuum created in the aftermath of the revolution has allowed militant Islamic groups to operate with impunity , with Salafists, a loose grouping of Islamists, openly hostile to minorities since the fall of the Mubarak regime .

Copts also fear the rise of political Islam in Egypt, with the Muslim Brotherhood, MB, likely to gain significant ground in elections planned for November 28.

Bishop Angaelos, the General Bishop of the UK’s Coptic Orthodox Church, told reporters in London last week that he was afraid to call on the international community to intervene in Egypt to protect Copts for fear of being “termed a traitor in my own country”.

While noting that the church had always maintained a patriotic stance, he called for an investigation into the Maspero incident.

“Within the military, there is a chain of command; the orders come from above so it is not difficult to work out who is accountable,” he said.

Nonetheless, he continued, “It’s not a Christian way to inflame hearts and communities. We are very happy to live in Egypt as Christians alongside Muslims.

“We have an ideal opportunity to embrace change and use the wonderful heritage, resources and people of Egypt to shape its future.”

The Arab Spring
Egypt
Conflict
Connect with us