Both state and independent outlets come to terms with new realities in post-revolution Egypt.

Both state and independent outlets come to terms with new realities in post-revolution Egypt. 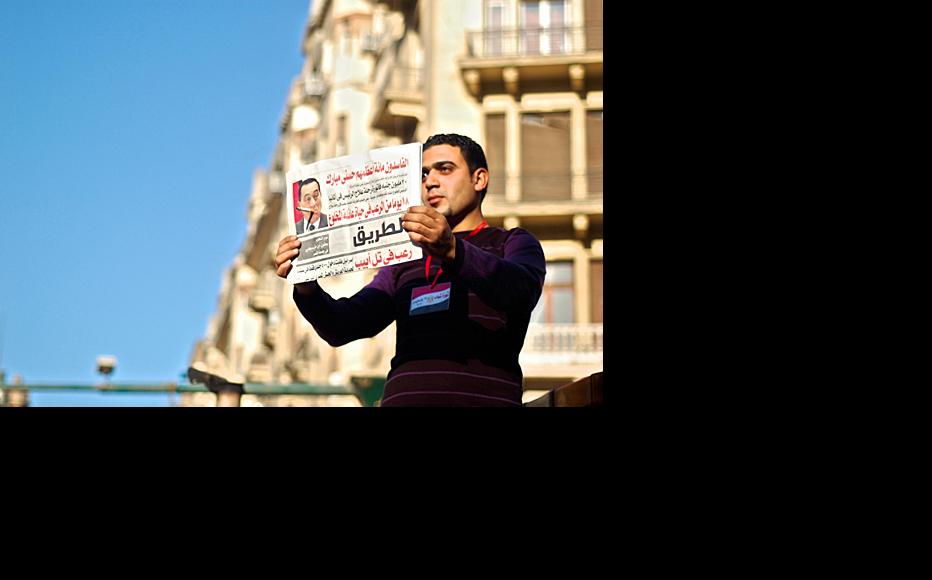 An Egyptian protester pokes fun at Hosni Mubarak during the February protests in central Cairo. (Photo: Ahmed al-Hilali/Flickr)
The link has been copied

In his final 18 days as president, Hosni Mubarak looked increasingly detached from the rapidly changing reality around him. The contrast between the gilded cocoon in which he lived and the seething anger on the streets was perhaps most dramatically illustrated by his final speech.

The whole of Egypt was out on the streets or glued to their television sets – as were millions across the world – in excited anticipation that the dictator would finally concede defeat on February 10. When he appeared on air, a couple of hours late, he delivered a recorded message that was a study in mediocrity and cliché.

With the pallor of a made-up corpse in an ill-lit funeral parlour, he paid lip service to Egypt’s youth – whom he patronisingly referred to as his “sons and daughters” – but defiantly refused to step down, claiming that he would not succumb to foreign pressure. In Tahrir Square, this was met with cries of disbelief, hoots of derision and quite a number of raised shoes.

A similar contrast in narratives was discernible in how the revolution was being covered by the Egyptian media. While intrepid journalists working for Egypt’s independent media continued their ever-bolder defiance of the regime of recent years to report on the historic events gripping the country, the regime’s tame mouthpieces mostly continued, right up to the eleventh hour of Mubarak’s downfall, to describe the protesters as “hooligans” and the protests themselves as being orchestrated by “foreign powers”.

This awoke memories in the minds of some commentators of the state media’s disgraceful performance during the 1967 war with Israel, when they broadcast fictitious reports of Egyptian victories until the bitter reality emerged a few days later.

Sawt el-Arab (Voice of the Arabs) was the Nasser-era, pan-Arabist revolutionary broadcaster which was, despite its clear propaganda mission, popular with millions of Egyptian and Arabs up until the 1967 defeat.

“With the revolution in full force, few thought the state’s toothless and incompetent television would actually revert to Voice of the Arabs strategies of completely fraudulent reports of the protests,” wrote media scholar Adel Iskandar in Al-Masry al-Youm, Egypt’s best-selling independent daily.

In the early weeks of the revolution, the state media reverted to old form with ludicrous reports that the protesters on Tahrir Square were only a handful of foreigners and foreign-trained agents whose allegiance was allegedly bought with buckets of Kentucky Fried Chicken, despite the fact that the KFC restaurant on the square was closed down at the start of the protests and a makeshift clinic to treat protesters was erected outside it.

Despite this, old ways die hard. “There has been no meaningful change in the state media since the revolution,” said Amira Mohsen, a young journalist who used to work for Nile TV, the state-owned satellite news channel. “It would appear that the self-censorship that had always been in place still exists and has only switched to suit the requirements of the new [military] regime.”

After two years at Nile TV, Mohsen resigned last September, months before the revolution, out of outrage at the way the broadcaster was run and the propagandist approach, she said.

“I… felt Egyptian state media was not journalism but rather working as public relations for the regime,” Mohsen said.

While defections of journalists disillusioned with the state-run media, like Mohsen’s, have long occurred, the trickle became a flood in the wake of the revolution.

“For decades, conscientious media workers had suffered in silence as failed and corrupt government policies were promoted across the airwaves and in print,” wrote Salah Abdel Maqsoud, who replaced Mubarak loyalist Makram Mohamed Ahmed as interim secretary-general of the Egyptian Journalists’ Union, in February. “Therefore, when the revolution erupted journalists were among the first on the street and among those who gave blood for the cause.”

In addition to resignations, strikes and walkouts across the state-run broadcast and print media, at least one government-employed journalist paid for reporting on the revolution with his life. Ahmed Mahmoud, a photographer with the largest government newspaper, Al-Ahram, was shot in the head while filming police attacking protesters from the balcony of his home.

Prior to the revolution, the state media was not uniformly propagandist, and certain journalists on the government’s payroll sailed very close to the wind. One example is Al-Ahram Weekly under the editorship of Hani Shukrallah. As it is published in English and hence does not reach a mass Egyptian audience, the regime kept less of a close eye on it.

But Shukrallah’s bold editorial approach eventually got his superiors within the Ahram conglomerate nervous and he was removed from the weekly in 2005. He recently returned to head up the newspaper’s new English portal in which he has infused his trademark outspokenness. For instance, weeks before the revolution, when a church in Alexandria was bombed on New Year’s Eve, he penned his very own J’accuse.

“I accuse a government that seems to think that by outbidding the Islamists it will also outflank them,” he wrote. “But most of all, I accuse the millions of supposedly moderate Muslims among us; those who’ve been growing more and more prejudiced.”

Another example is Salama Ahmed Salama, Egypt’s archetypal non-partisan journalist, despite having worked for decades for Al-Ahram, whose front page was dominated for most of the past three decades with Mubarak’s image.

Although he accepted that the newspaper he dedicated so many years to was the “façade of the system”, he is a strong believer in press freedom and tested the system constantly until he left the government flagship to help set up the highly respected independent Al-Shorouk. “The reader will get a different taste of modern journalism,” Salama promised in his first editorial for the upstart title in 2009.

And it seems to have kept its word.

“I think that Al-Shorouk is the most professional and objective newspaper on the market in Egypt,” Mohsen said. Unlike some of the other independent Egyptian titles, especially the opposition ones, which are clearly partisan or sensationalist, Al-Shorouk does not shy away from complexity or controversy - but, like Salama himself, it steers clear of political allegiances and polemics, even in the wake of the revolution.

However, Al-Shorouk is not alone, and nor was Egypt’s newfound media freedom built in a day. One of the first newspapers to push the political boundaries to their limit was the opposition Al-Dustour, which was set up in 1995 by Ibrahim Eissa in Cyprus, due to Egypt’s restrictive press laws at the time. The government banned the outspoken and oft-sensationalist “foreign” title in 1998 but it managed to resurface again in 2005.

The growing boldness of Egyptian civil society and the opposition movement has been mirrored in the independent media which, in recent years, has slaughtered most of Egypt’s sacred political cows. For example, the unspoken journalistic taboos which forbade, above all, open criticism of Mubarak in the media was demolished by an increasingly iconoclastic press which openly criticised the then president for refusing to step down, covered rumours of his ill-health and expressed its opposition to Gamal Mubarak inheriting the presidency from his father.

So successful has the independent media been that Al-Masry al-Youm, which was launched in 2004, quickly overtook the stagnant Al-Ahram to become Egypt’s most popular and respected newspaper whose official circulation figures may be a little lower than the government flagship but its actual readership is far higher, according to numerous independent experts.

And despite an internet blackout and animosity from the collapsing regime in the early days of the revolution, the more open atmosphere has been good for the independent press. For example, Al-Shorouk saw its circulation double to reach 150,000 copies in the first weeks of the uprising.

Although private television, which the government kept on a tight lead, was years behind the printed press, it has come into its own over the past few months. Private channels have developed a niche in prime-time talk shows with key figures in the revolution. One such interview, with Wael Ghonim, the Google executive who set up a Facebook page which helped facilitate the revolution, became so iconic that it is credited with giving the revolution a “shot of adrenaline in the heart”, according to Egyptian columnist Mona Eltahawy, at a moment of deadlock when it looked at risk of losing steam.

So, what does the future hold for Egypt’s media? It is difficult to say and a lot depends on the kind of Egypt which emerges from the ruins of the former regime. On the positive side, Egyptian journalists are enjoying perhaps unprecedented liberties and a new freedom of information bill which is currently in the pipeline could empower them to do their jobs better.

However, a number of clouds loom on the horizon. One is the self-censorship practised by some journalists weary of getting into a confrontation with Egypt’s de facto interim rulers, the oft-fearsome Supreme Council of the Armed Forces.

Although headless, Egypt’s formidable propaganda apparatus is still largely intact. Many Egyptians have called for the complete dismantling of the ministry of information and the state information service, as well as for the removal of subsidies to the state-owned media.

Though Egyptians should be wary of private ownership too, which is not always beneficial, as the News International scandal in the United Kingdom and the United States is proving. The revolution provides Egyptians with a golden opportunity to learn from their own mistakes and those of the West to redefine the media landscape in a way that promotes truly free journalism.

Government media subsidies can be kept in place but should be channelled through a firewall which ensures independence, while private media should be encouraged, as much as possible, to be set up through non-interfering trusts and foundations.

Kalam garayed (newspaper speak) has long been a derisive term in Egypt which reflects the intuitive distrust with which Egyptians regard the media. Perhaps in the wake of the tumultuous changes gripping the country, future generations will seek kalam garayed as a positive thing.

The Arab Spring
Egypt
Media
Connect with us