Uprising stirred hopes of new equality between men and women, but little progress has been made.

Uprising stirred hopes of new equality between men and women, but little progress has been made. 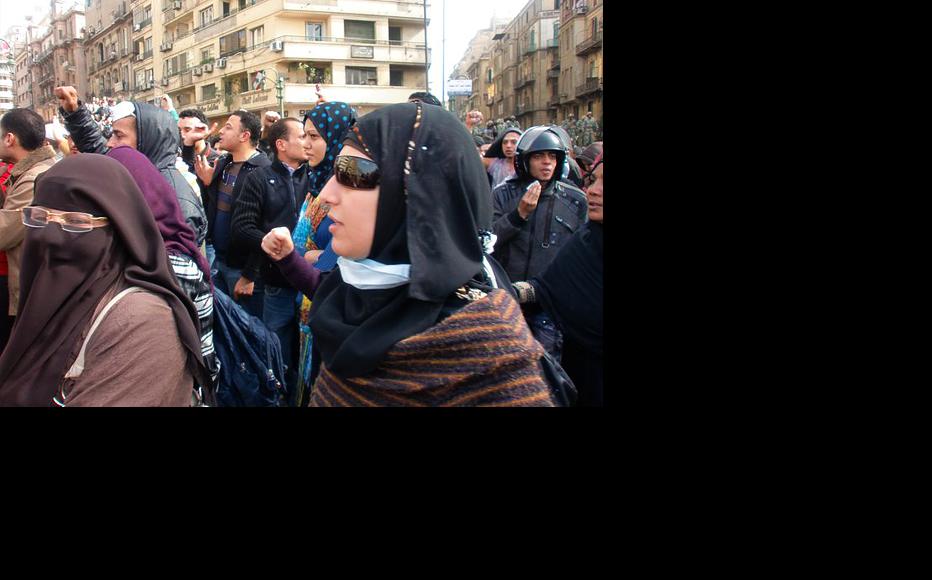 Women have played a signifcant role in the Egyptian revolution but are now slowly being sidelined. (Photo: Daniella Peled) 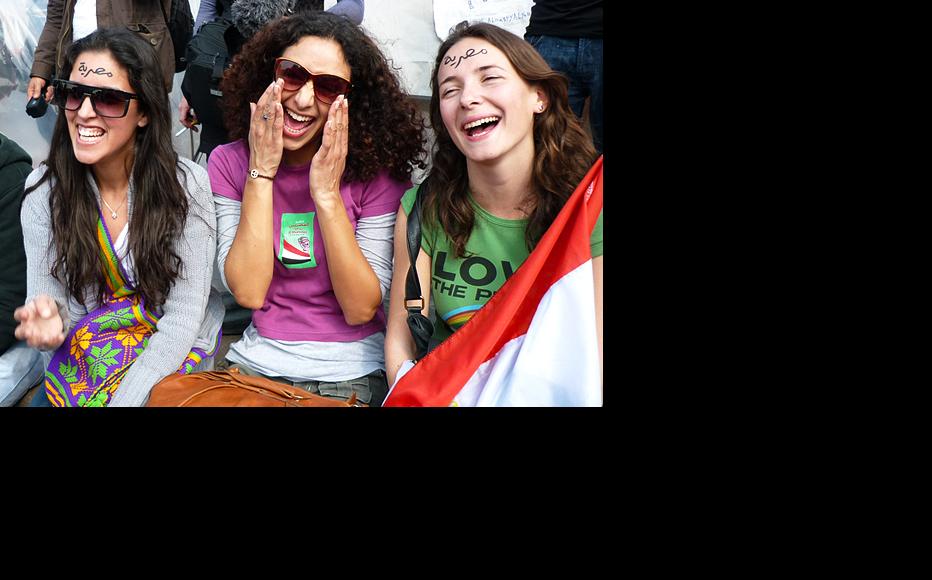 In the early weeks of the Egyptian revolution, Tahrir (liberation) Square provided tantalising glimpses of a new Egypt of liberty and equality in which class, religion, gender and age melted into apparent insignificance. Muslims and Christians mingled cross and crescent; the old followed the young’s lead; men and women became comrades rather than “brothers” and “sisters”.

“The social problems that have plagued Egypt for years seem to have dissolved in the solidarity and egalitarianism that have become the defining characteristic of the community of peaceful protesters in Tahrir,” said Karim Medhat Ennarah, an Egyptian activist who camped out for weeks on the now-iconic square.

The positive atmosphere among the protesters was such that “we were joking about how the square is now ready to declare independence and become the Free Republic of Tahrir”, he continued.

So, was this initial euphoria justified, and will the Tahrir model spread to society as a whole to transform Egypt into an egalitarian meritocracy where youth and gender are no barriers to advancement? Could the Arab Spring one day blossom into a summer of social and sexual liberty for young Egyptians, regardless of their gender?

It is true that Egyptians have managed to redefine the country’s political landscape dramatically, most spectacularly by toppling Egypt’s former dinosaur-in-chief, Hosni Mubarak.

However, the revolution to date has focused mainly on politics and little on the deeper socio-economic changes the country needs if it is escape the oppressive grip of the past.

Although the country is free of its supreme symbol of authoritarianism, it is still struggling with millions of what I have described as “mini-Mubaraks” - those running families, businesses and universities through the kind of deferential patronage made unpopular by the former president.

The main victims of this are the young and women, two relatively disenfranchised groups who played a pivotal role in the revolution’s success but are now slowly being sidelined by the older generation and men respectively in the post-revolutionary scene.

Women in particular, despite their active involvement in the revolution and all the sacrifices they made, have seen everything change in Egypt -while nothing has changed in their situation, as poignantly symbolised by the appearance of sexual harassment on Tahrir square itself in recent weeks.

“Men and women stood together hand in hand – as Egyptians regardless of their gender – and won the battle against corruption,” said Marwa Rakha, an Egyptian writer, broadcaster and blogger. “Now the revolution is over and everything is back to normal. The attitude towards women has not been impacted by the historic victory.”

To illustrate her point, Rakha – who wrote The Poison Tree, a novel about the “poisoned culture” of Egyptian traditions, beliefs and taboos – cites as an example an International Women’s Day rally on Tahrir Square in March, where the participants were harassed.

“They were attacked,” she said. “Men chanted slogans against them like, ‘Men want to topple feminists’ and ‘Since when did women have a voice?’ They were asked to go home and obey God. They were let down by the average Egyptian man and woman alike.”

Rakha does not hold out much hope of full gender equality or sexual liberation, particularly for women, coming about in the foreseeable future.

“Patriarchal values, religion, and traditions are not as easy to topple [as Mubarak],” she said. “Virtue, honour and integrity lie between a woman's legs – this is the subliminal message that propagates [itself] through sermons, movies, songs, novels, or shows.”

Egyptian society continues to be obsessed by the issue of female virginity. Although most human societies, either now or historically, have placed a premium on premarital sexual chastity, or “purity”, particularly when it comes to women, many countries have broken free or are breaking free of this ancient prejudice.

This has largely not occurred in Egypt, despite promising signs a few decades ago. While Egypt and other secularised Arab states were not far behind the West in terms of gradual sexual liberation until the early 1960s, the West has since had its sexual revolution, while in the Egyptian context it never really made it beyond a counter-cultural movement.

In fact, a sexual counter-revolution began its gradual march in the late 1970s, as more and more people turned to the security of Islam and tradition.

Part of the problem is that Egypt’s sexual liberation was not a truly indigenous process and was led by a secular elite who emulated the West, rather than innovated or adapted the movement to suit local circumstances.

This meant that once the West was no longer held in high esteem due to its post-colonial meddling in Egypt’s affairs and the secular elite was discredited by its failure to turn Egypt into a modern and prosperous society, millions turned to the security blanket of religion and tradition.

“Too many people hold that the solution to all Egypt’s problems is morality, and the main moral issue for them is how women relate to men,” Aida Seif el-Dawla, one of Egypt’s leading feminists, told me a few years ago in Cairo.

This fixation on women as “corrupter”’ is a symptom of the male-dominated nature of society.

“Economic factors cannot be ignored when talking about Egyptian women – many of them are dependent on a man,” Rakha said. “Social factors also play a role; no one wants to be the single spinster or the divorcee.”

This desire to control women is partly a manifestation of the general sense of powerlessness among the population.

“Whenever people become less in control of their lives, they seek to control those aspects that are left to them,” Seif el-Dawla said. “If you can’t control your income, the fate of your family or the politics of your country, then you will try to control what you can - the private sphere.”

And yet this observation may hold some promise for the future. If the revolution succeeds in making Egyptians in general feel more empowered, and Egyptian men in particular less emasculated, then the circle of freedom is likely to spread wider to embrace women.

Activists could focus greater attention and resources on challenging and redefining traditional notions of manhood in order to empower what I call the “average Mo” to see gender equality as a sign of strength, and not an admission of defeat in the sex wars.

Despite the outward appearance of the growing Islamification of society over the past three decades, Egypt has been undergoing a process which I have described as “secularism in a veil”. And this process dropped its veil during the revolution, when the youth behind the protests set out their demands, all of which were democratic and secular in nature.

Even the hijab, viewed almost exclusively as a tool of oppression in the West, has played its part in empowering Egyptian women, though not in the sexual sphere.

According to Rabab el-Mahdi, who teaches political science at the American university in Cairo, the headscarf “has given women more access to the public sphere, professionally, politically and socially ... Ultimately, women should be able to go out into the public sphere without the veil. But it is a coping mechanism”.

However, while women are usually criticised and reprimanded for openly expressing their sexuality, men are celebrated and applauded. This has resulted in a lop-sided and warped so-called sexual revolution in which too many men feel it is almost their divine right to have fun with women while young, even to the extent of sexually harassing them on the streets, only then to settle down with a “virtuous” woman. This is not only unfair to women but counterproductive for men – after all, how many women want to be branded a “slut” by the very man they slept with?

The best hope for the future for Egyptian women is that their greater economic independence, coupled with a more open, post-revolutionary political arena could finally inspire them to abandon their fear and reservation and to stand up en masse for full equality.

“Change will only happen,” Rakha said, “when women have more faith in themselves, get a better education, have goals and interests other than men, and become more involved in the community.”

The Arab Spring
Egypt
Women's rights
Connect with us