After years of drafting text and consulting with officials, women’s group finds that its proposal to protect victims and punish abusers has been abandoned.

After years of drafting text and consulting with officials, women’s group finds that its proposal to protect victims and punish abusers has been abandoned. 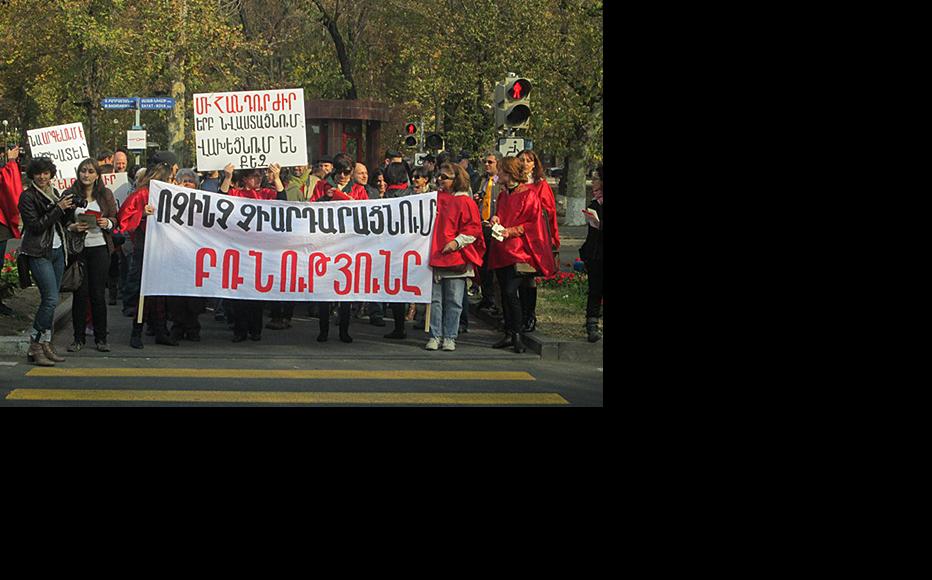 Protest against violence against women in Armenia. (Photo: Women&#039;s Resource Centre/Facebook)
The link has been copied

The Armenian government has rejected a draft law that would define the nature of domestic violence and set out mechanisms to punish perpetrators and help victims.

The decision has disappointed activists who spent years preparing the bill, and who insist that specific legislation is needed to address issues where current laws are failing.

Over 760 cases of domestic violence were recorded in Armenia last year, including five where women were killed by their husbands. Activists say the statistics represent only a fraction of the true numbers.

The Women’s Rights Centre in Armenia began the drafting process in 2007, and submitted a proposed law to the labour and social affairs ministry two years later. After two highly-publicised cases where wives were murdered by their husbands, the government turned its attention to the law, and set up a special working group in 2011. (See Slow Progress on Domestic Violence Law on hopes that the document would eventually make it into law.)

“All the institutions involved with justice say the justice system is not suited to this new law. We don’t have the kind of justice system that can implement the law in this form,” he said, adding that a legal expert had warned that such a law would “create more problems than it solves”.

Berikyan suggested that ongoing revisions to the current criminal statutes would effectively meet the same needs that the domestic abuse bill was trying to address.

“The prime minister has already proposed amendments to four codes [on crimes and penalties] to lay down mechanisms for responding to and preventing domestic violence,” he said.

Indicating that government officials might still revive the bill if the revisions proved inadequate, Berikyan said, “Before we can pass a separate law, we need to work on society and gradually prepare it so that it becomes possible to pass the law in future.”

Advocates of the bill say that at the moment, there is no legal mechanism that enables police to identify victims of domestic violence. The legislation would seek to protect victims by banning assailants from approaching them or entering their homes, even when the property belongs to the offender.

Officials say that under current laws governing the police, it would be illegal for law-enforcement officers to prevent owners accessing their own property.

Oliver McCoy, democratisation programme manager at the OSCE office in Yerevan, said he had been impressed by the efforts made to introduce the bill, and surprised by its rejection.

“However, the OSCE, which I represent, respects the government’s decision and understands the situation,” he added. “The country is implementing serious legal reforms and, if the draft were adopted, it would impose the necessity of implementing further changes in other laws.”

For supporters of a separate law, the argument that it is incompatible with other legislation does not hold water.

Lara Aharonian, head of the Women’s Resource Centre, said the same institutions that were now criticising the bill had representatives sitting on the working group that drafted it, and had never informed her of possible clashes, or of changes in wording that would help avoid them.

David Amiryan, deputy director of Open Society Foundations – Armenia, agreed that it was very late in the day to be raising fundamental objections.

“Was this law drawn up over several years, finalised, and submitted for consideration just so that state officials would realise that it did not match existing legislation and needed to be done differently?” he asked. “Were state resources being spent for nothing all this time?”

A group of civil society groups has sent President Serzh Sargsyan a letter with more than 1,300 signatures appended, warning him that abandoning the bill would send out exactly the wrong message.

“The government has made it plain to the Armenian public and the wider world that preventing domestic violence is not seen as an important problem,” the statement said. “We now believe that the government lacks the political will to pass this law, but that it’s constantly flirting with it in order to win time, as it doesn’t want to go against the obligations it has assumed in international conventions.”

The decision has reignited an old debate about whether Armenia needs to legislate on domestic abuse at all.

Margaret Yesayan, a member of parliament from the ruling Republican Party, denied that violence in the home was widespread enough to warrant this kind of action.

“We have many laws that deal with domestic violence in one way or another. It’s clearly possible to find a solution within the framework of existing legislation,” she said.

Naira Zohrabyan of the opposition Prosperous Armenia party rejected that argument, insisting that not only was the law essential, but that a great deal of work would then be needed to change public attitudes.

“The problem of domestic violence is deeply rooted in our national traditions. A woman suffering abuse doesn’t want to go to the police, as she believes she will be condemned by her own relatives,” she said. “Legislation would bring the problem into the legal domain, but no law will solve things unless our own mindset changes.”

Mary Aleksanyan is editor of the Human Rights in Armenia website.