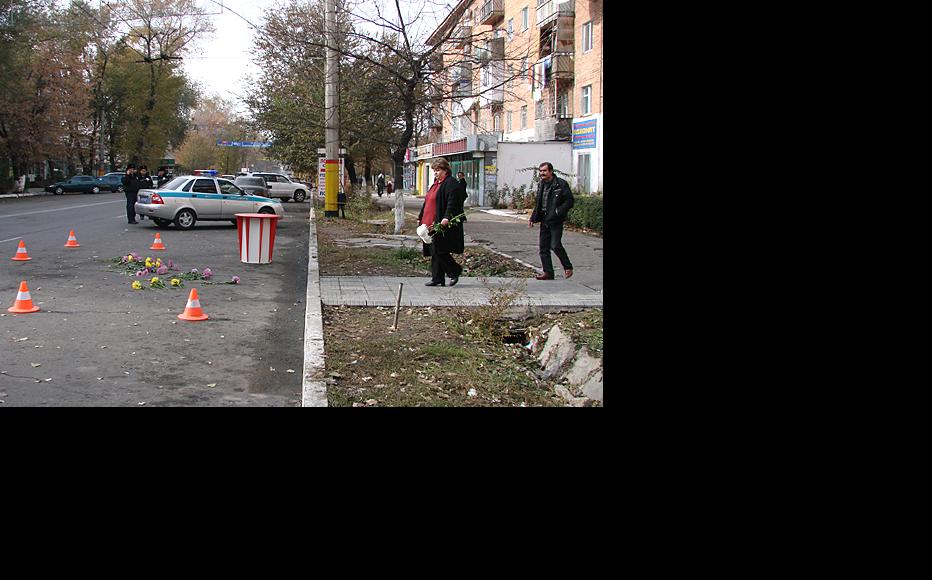 Residents of Taraz lay flowers at on of the locations where police officers were killed by a suspected Islamic militant. (Photo: Larisa Taranova)
The link has been copied

A shooting spree by a suspected Islamic militant in southern Kazakstan has left analysts wondering whether the killer acted alone or as part of a more concerted plan of attack.

The assailant, named as Maksat Kariev, robbed a gun shop in the southern town of Taraz on November 12, taking two hunting rifles and killing a security guard and a bystander. He then shot dead two policemen, taking a pistol and a Kalashnikov automatic rifle from them.

Kariev next went to his home, where he collected a rocket-propelled grenade launcher and set off to attack the Jambyl regional office of the National Security Service, KNB. Although he opened fire on the building, no one was hurt.

He wounded two more policemen before he was finally cornered. A police officer died when Kariev blew himself up.

He killed a total of five people during this series of events, and the authorities say he also killed two KNB officers. IWPR understands that this took place before the raid on the gun shop, and that Kariev turned on two officers who had been tailing him. (See also Southern Kazak City Reels From Shooting Spree.)

Officials are saying Kariev seems to have acted alone, although they will not be sure whether he had any accomplices until the investigation concludes.

The incident was the latest in a series of attacks in Kazakstan over the last six months.

On October 31, two explosions hit the western city of Atyrau. A 24-year-old local man blew himself up, and a second blast occurred in a rubbish container. No one else was hurt.

Three people suspected of links to the dead man were arrested. Prosecutors have linked the Atyrau incident to Kazak members of an Islamic radical group called Jund al-Khilafah, “Soldiers of the Caliphate”, which they believe to be based somewhere on the Afghan-Pakistani border.

In mid-May, a 25-year old man blew himself up at KNB headquarters in the city of Aktobe, also in western Kazakstan. The incident has been described as Kazakstan’s first suicide bombing.

While no link has been established between the attacks in Aktobe, Atyrau and now Taraz, the prospect of rising violence with Islamic militant connections is alarming for Kazakstan, a country previously untouched by this kind of attack.

IWPR asked Nikolai Kuzmin, political editor of the Expert-Kazakstan magazine, to discuss whether the latest incident fits into an overall pattern of extremist action in Kazakstan.

Nikolai Kuzmin: It’s been known for some time that what’s called international terrorism operates as a network with no vertical, hierarchical structure. Al-Qaeda cells in Pakistan, Sudan and Indonesia do not maintain contact with one another other, although they share a common ideology and employ similar tactics.

The same is true here. If one attempted to track down a centralised unit masterminding terrorist acts, then one clearly wouldn’t find it. That’s in spite of the suspicion that these incidents have a lot in common.

IWPR: Is it significant that, unlike earlier attacks in western Kazakstan, this latest one occurred in the south of the country?

Kuzmin: Extremism isn’t spreading across the country from some kind of single centre. It is just that the number of terrorist acts is growing, and that this is more in evidence in western Kazakstan. I do not believe people in the west of Kazakstan are more susceptible to extremist ideology than their fellow-citizens in the south. Acts of terrorism can occur in any city – there are no regional specifics.

IWPR: What might be behind this extreme form of protest?

Kuzmin: In recent years, radicals from Kazakstan have established contact with like-minded individuals from other countries. Religious activists from abroad have come here looking for people who share their views, and they’ve found them. That’s how various groups have emerged; it’s obviously not just one group. Sometimes they set themselves up on their own.

Kazakstan has supported the war on international terror through concrete actions. Hence, the radicals have added us to their list of ‘unfriendly states’.

Look at eastern countries – terrorist acts happen in China, India, Pakistan, Iran, Turkey, even in Japan. In Afghanistan, they are a daily occurrence.

Kazakstan is no longer an exception.

IWPR: How can you explain the presence of extremists in Kazakstan?

Kuzmin: Extremism is generally a response by an individual, sometimes a whole group of people, to external factors. It isn’t the same as terrorism, which is an even more extreme form of behaviour. Terrorism comes when a reaction to personal, family, or social problems is expressed through extreme actions like killing policemen, causing explosions, or launching a suicide attack. We are now seeing how extremism, fuelled by the accumulated problems of young people who have grown up in [a culture of ] violence, is being transformed into terrorism in this country.

IWPR: The information that’s been made available about this group, Jund al- Khilafah, suggests it’s a small number of people based outside Kazakstan. It doesn’t look as credible a force as it presents itself in its video material.

Kuzmin: This group, like the numerous other ones that portray themselves as ‘soldiers of Islam’, does not present a real military threat…. But they can nevertheless inflict huge damage on a country. They seek to demoralise their enemy and sow fear. This can be done even with small numbers of people.

Their cellular structure makes them very durable. It’s much more difficult to tackle thousands of autonomous five-member groups than one centralised organisation of 50 people.

IWPR: How do you think the authorities should respond to such attacks?

Kuzmin: Tightening up security and doing the right thing are not mutually exclusive. What’s worse, I think, is giving in to terrorists and trying to avoid angering them….

A person who goes on a killing spree shouting ‘Allahu Akbar!’, and a person who kills someone else because his skin is a different colour may position themselves differently – one is religious, the other a racist. But in essence, they are both extremists.

IWPR: What would you say to the views that it’s the Kazakstan authorities who are behind these attacks, as a way of diverting attention away from social and political problems?

Kuzmin: That kind of view is expressed in every country where terrorist acts take place. There will be always people who believe in conspiracy theories. I am not one of them. The authorities consist of rational rather than crazy people.