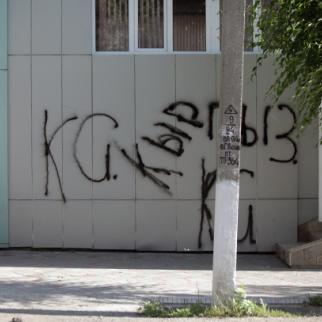 During the June 2010 clashes, handwritten signs appeared across Osh denoting areas and property as Uzbek or – as here – Kyrgyz in the hope they would be left along. (Photo: Inga Sikorskaya)

The outbreak of violence between Uzbek and Kyrgyz communities in the cities of Osh and Jalalabad and nearby rural areas in June 2010 left more than 400 people dead and a trail of destruction in its wake.

The focus of the IWPR report Deep Rifts Remain in Conflict-Torn Kyrgyzstan was on how locals are coping with the impact of violence on their lives; how much tension still remains and what signs are there, if any, of reconciliation and rebuilding.

The sensitivity of the topic and the uneasy atmosphere in the wake of the conflict required the involvement of journalists representing both communities.

Therefore, the piece was co-authored by two IWPR-trained journalists – Osh-based correspondent Isomidin Ahmedjanov, who is ethnic Uzbek, and a Kyrgyz reporter from Bishkek who writes under the pseudonym Anara Yusupova.

Their experiences in putting together a joint article show how covering this issue, even in the post-conflict period, is still not easy.

“The tension between Uzbek and Kyrgyz communities remains and can be felt in all aspects of life. Under such circumstances, trying to talk to people requires being able to convince them that you are not taking sides and to exercise self-control so as to keep your emotions in check.

“Any wrong move or carelessly constructed question, and there is a danger of prompting suspicion from locals who might accuse you of being a spy.

Such an attitude towards the media was caused partially by some one-sided reports which highlighted the losses and damage suffered by one side, while putting all the blame on the other.

“During last year’s violence, such inflammatory reporting exacerbated the situation, and in the wake of subsequent tragic events made reconciliation efforts more difficult.

“Doing your job as a journalist in the environment like this is like walking on a knife edge.

“I recall several incidents when I approached people on the street and they were unfriendly and did not want to do anything with me and my questions.

"Mistrust between communities following such violent clashes is understandable, and so is the reluctance of people from the Kyrgyz community to open up to a person whom they automatically see as an outsider.

“Some locals with whom I managed to talk, for instance construction workers, were willing to share their thoughts with me. I was surprised how insightful their observations were about the impact of the conflict on the life of the community.

“Among the lessons that I took from working on this report was an understanding that, although I am an emotional person by nature, in my job as a journalist it is my role of a neutral outsider that enables me to do the job properly.

“What helps to get people talking is if you demonstrate that you are working an on impartial footing. Given the sensitive nature of the issue I was reporting on, I was careful how I chose my questions. I also wanted the interviewees to see me not as a member of Uzbek community, but as a journalist who wants to tell the truth.

“Another lesson was that if you have a feeling that someone has a story to tell, but they are at first unwilling to talk, you have to be persistent and put that extra effort to get him or her to share it with you.

“Among the people I encountered was a local businessman who fell victim to a criminal gang. They threatened him and his family and forced him to hand over his business.

“Initially, when I introduced myself as a reporter and explained to him the purpose of the story I was working on, he was reluctant to speak.

“But after I spent some time with him, he felt more comfortable about opening up. His story - told anonymously - was evidence of how criminal groups took advantage of the chaos that followed the violence, as well as the weakness of central government at that time, and how some entrepreneurs were forced to part with their property and businesses almost for nothing.

“Working on the article was a challenge but as a journalist I learned a lot about conflict reporting.”

“Following the conflict, relations between various ethnic groups living in Kyrgyzstan topped the political agenda. As for relations between Kyrgyz and Uzbeks, it feels like a bleeding wound. The issue is a difficult one to cover and various groups have their own take on it.

“Some media are fearful of the topic’s sensitivity and their reporting is too vague. Kyrgyz journalists who try to demonstrate a balanced approach and mention the suffering of Uzbeks are criticised by Kyrgyz nationalists for ‘taking sides’ in favour of the Uzbeks. These nationalists inundate any newspaper that carries such reports with angry letters.

“Some Uzbek journalists, on the other hand, put the blame squarely on the Kyrgyz side, blaming them for what they sometimes refer to as genocide.

“That is why it was not an easy decision for me to take part in a story trying to assess the current tension between members of these communities.

“Knowing what I do about last year’s violent events, I understand those Uzbeks who decided to leave the country. I understand that it is not easy for them to settle in a new place; that they miss their home, but they are too fearful to come back.

“I also have a lot of respect for those members of the Uzbek community who have found enough courage to stay. They have a right to do so and no one has the right to take it away.

“What became clear to me when I worked on this article is that, despite what happened between Kyrgyz and Uzbeks, both sides want to live in peace.

“So after what was initially hesitation on my part of being involved in a report dealing with such a sensitive issue, I concluded that it is up to us, independent journalists, to speak out about the problems that still remain in the south.

“The neutral platform that IWPR provides for publishing stories like that is a good opportunity to tell the truth about problems that still exist between communities that went through conflict so recently.”