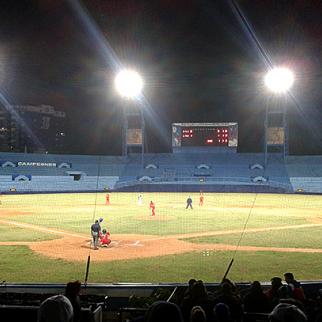 Cuban athletes are finally to be allowed to play professionally overseas and will be awarded cash incentives at home, in a move designed to stem the flow of defectors seeking better career opportunities abroad.

The official newspaper Granma reported last month that athletes would be able to accept foreign contracts as long as they got approval from the National Institute for Sport, Physical Education and Recreation and the relevant sports federation.

For more than 50 years, Cubans have been barred from playing for teams abroad, a rule that has had a particular impact on baseball, a hugely popular game in Cuba. The national team is ranked in top place by the International Baseball Federation.

Denied permission to work abroad and unable to earn a living at home, baseball players escaped from Cuba illegally or defected from the national team when it was playing abroad. Some went on to earn multimillion dollar salaries in US major leagues.

In a precursor to the new policy, three Cuban baseball players were allowed to join the Mexican Baseball League this summer.

As well as being a move towards greater freedom in sports, the reform will bring the government financial rewards, as Cuban athletes will have their foreign earnings taxed at home.

The reform also includes measures improve the lives of sportspeople in Cuba itself. They will see increases in their pay, currently little more than the average monthly wage of 466 pesos, worth 17.5 US dollars.

An athlete with a university degree will now be paid 861 pesos a month, and those deemed to be “masters” will get 975 pesos. Trainers working with high-performance athletes will also receive additional payments of half their current salary, currently between 574 and 650 pesos a month.

Medal winners in international events will receive monthly wages – 1,500 pesos a month for Olympic medalists and 1,100 for Central American champions.

There will also be pay incentives for those classed below the “high-performance” level.

Pay increases for baseball players will apply from the beginning of the national series this month.

Until now, only players taking part in international competitions like athletics, judo, boxing, wrestling and chess received pay incentives. Individuals were allowed to keep 15 per cent of any prize money, and their trainers got four per cent. According to Granma, competing teams shared 30- 50 per cent of the prize money among the players.

Félix Gómez, a chess teacher who holds a Grandmaster title, said he understood that instructors would earn 20 pesos for each student they entered in provincial competitions.

His colleague Alexis Gutiérrez, said, “There’s been speculation but nothing concrete. If it is true, it will be a pittance. We’re basic-level trainers, so by law we get a lot less than other levels such as the trainers at High-Performance Centres. But I’ve done some research and they aren’t going to earn much in pesos.”

Despite the imminent pay rises and the right to be contracted abroad, Cuban athletes continue to defect.

Earlier this month, Daniel Carbonell Arredondo, who played baseball for Camagüey, and Orlando Pérez Darias who played for Industriales de La Habana, both left the country illegally for an unknown destination.

Cuba
Law reform
Connect with us