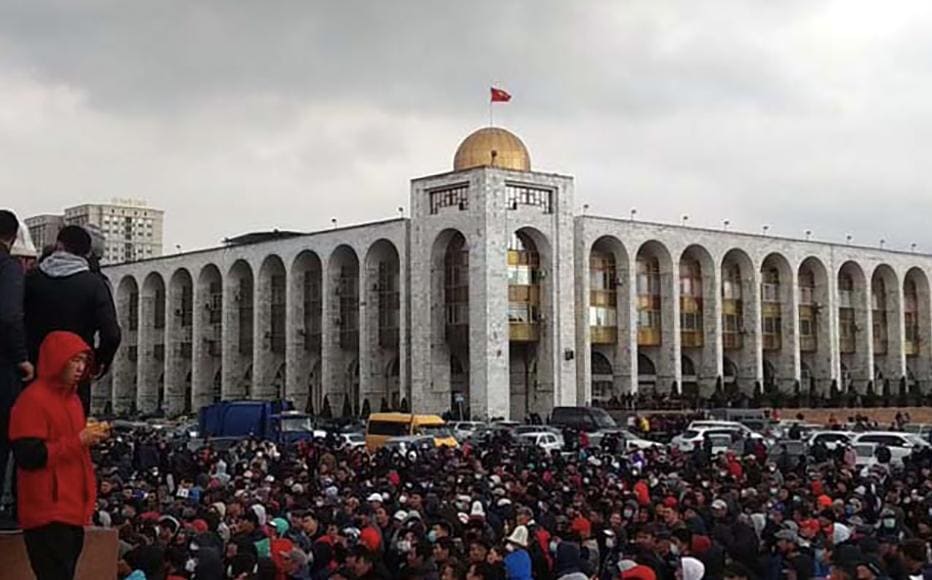 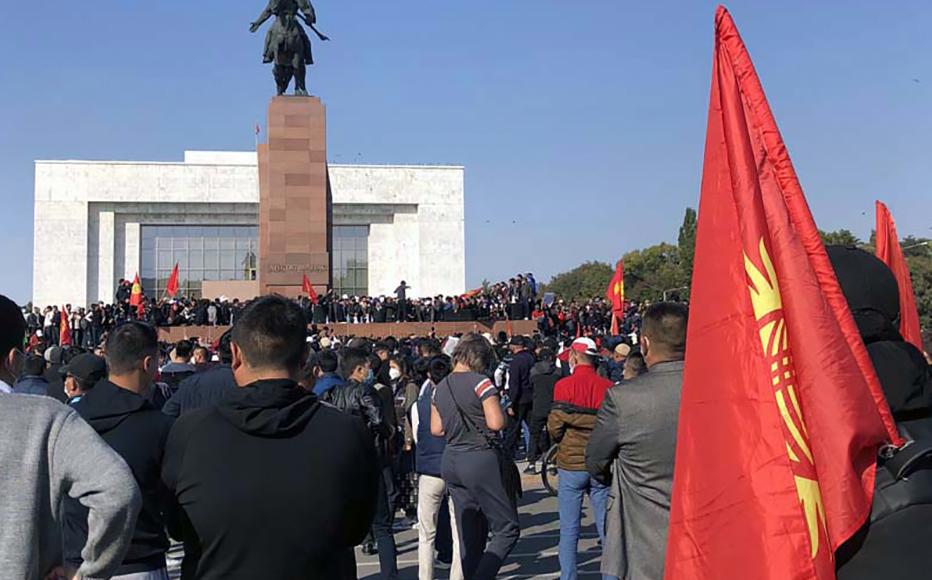 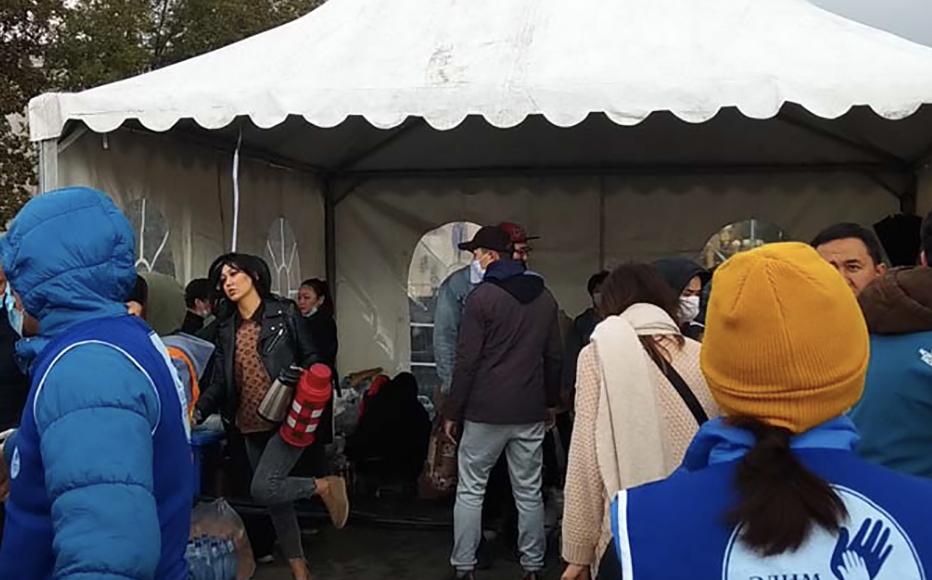 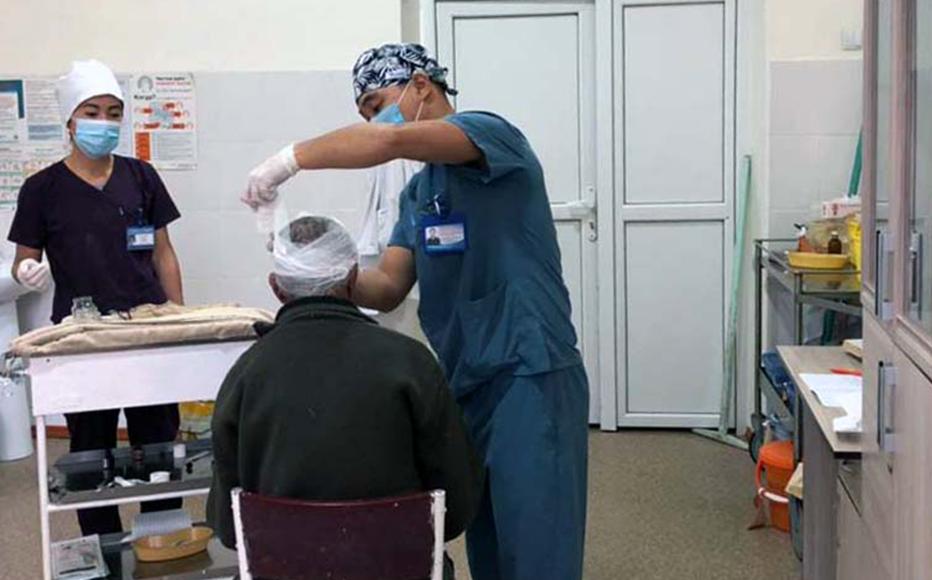 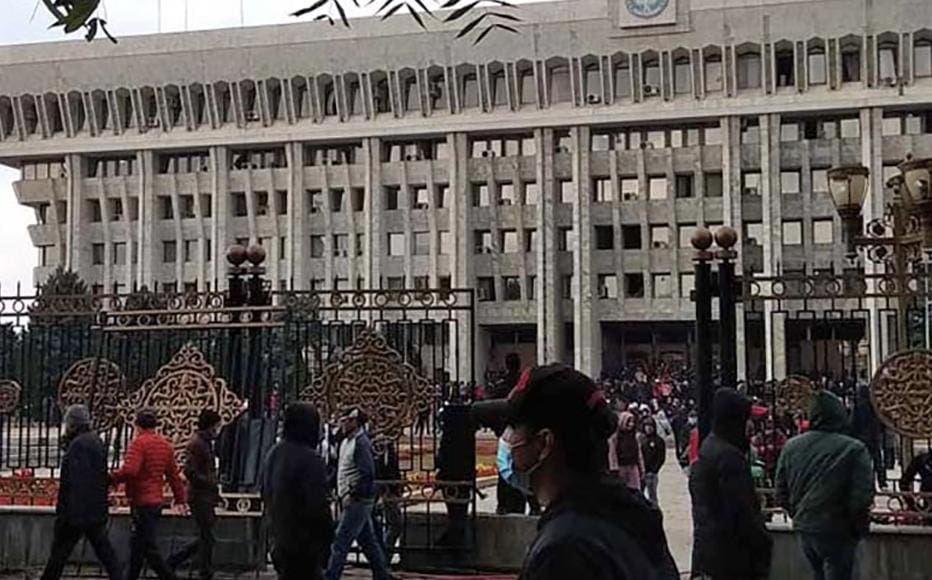 Protesters broke into the Parliament building and caused a lot of damage inside, 6 October, 2020. © IWPR
The link has been copied

Protestors angry at the results of Kyrgyzstan’s parliamentary elections have stormed government buildings in Bishkek and taken over a number of state institutions, with mass unrest ongoing around the country.

Although President Sooronbay Jeenbekov remains in power, the Central Election Commission (CEC) declared the results of the weekend’s elections invalid and i is unclear whether he can maintain control over a highly volatile situation.

The protests began after the preliminary results of the October 4 polls were released by the CEC, which announced that three parties – Mekenim Kyrgyzstan, Birimdik and Kyrgyzstan - were the clear winners.

Mekenim Kyrgyzstan is associated with the influential Matraimov family from the south of the country, one of whom is the former deputy customs chairman Raim Matraimov who has long been embroiled in corruption allegations. A number of media outlets published stories about alleged vote-buying by the party during the campaign period.

Birimdik is linked directly to the president himself, with media reports that party members had pressurised public servants to vote for them.

Kyrgyzstan is a grouping of business leaders previously loyal to former president Almazbek Atambayev, currently awaiting trial on corruption charges, who then transferred their support to Jeenbekov.

Leaders of 12 opposition parties immediately declared that they did not recognize the results and called on supporters to rally in central Bishkek on the afternoon of October 5.

Although many of the factions had been openly hostile to each other ahead of the elections, they joined together to fill Ala-Too square with thousands of supporters demanding new elections and even the president’s resignation.

According to various sources, one man died and about 600 people were injured, 150 were hospitalized, and 13 were taken to intensive care. Many law enforcement officers were among the wounded.

By 9pm, the situation escalated to such an extent that protesters broke down the gates of the White House, the seven-story building which houses parliament and the president’s offices, and marched through it destroying the president's headquarters, parliament meeting rooms and other offices.

Some protesters then went to the State Committee for National Security (GKNB) to demand the release of Atambayev, who has been held in the GKNB pre-trial detention centre since last year.

By the early hours of the morning, Atambayev supporters had also secured the release of a number of key associates including former Prime Minister Sapar Isakov, adviser Farid Niyazov and bodyguard Kanat Sagymbayev.

Another well-known opposition politician, Sadyr Zhaparov, an opponent of Atambayev, was freed from another prison.

Jeenbekov, meeting with international observers on the morning of October 5, stressed that the elections had been free and fair.

However, in a video message released the following morning, he said that the CEC should investigate all violations and called on the leaders of political parties to "calm down their supporters"

"I call on all my compatriots to keep the peace and not to succumb to the calls of provocative forces,” he continued. “The peace of our country and the security of our society are the most important things. I call on all forces to put the fate of the country above political ambitions and return to the legal field.”

Experts warn that the situation has spun so far out of control that the way forward is unclear.

"Now the biggest risk is that the country may be in the abyss of total lawlessness,” said Anar Musabayeva, a political analyst from Bishkek. “The country has developed into virtual anarchy. Against this background, there are other risks: the south-north problem may be rocked, it may lead to civil confrontation if the so-called opposition parties still do not come to a consensus and do not try to enter the legal field.”

She noted that the current parliament still had legitimacy, but warned that the lack of unity among the opposition could prove particularly dangerous. A parliamentary session called on October 6 could not meet because there was no quorum.

"The leaders of political parties who protested the elections and went to the rally cannot unite in any way. Compared to the situation in 2010 [the uprising which ousted former president Kurmanbek Bakiyev and led to ethnic violence which left hundreds dead], the situation here is much more alarming.

“Now the motley company of political groups can't agree. They have different interests. Otherwise, they could have united before the election."

Elmira Nogoibayeva, who heads the Polis Asia analytical centre, warned of the danger that criminal gangs might exploit the chaos.

"We need to sit down at the negotiating table,” she said. “Our people simply do not know how to discuss. Now put seven people at the negotiating table, they will not be able to agree. Then you need to invite experienced moderators, negotiators, and mediators. Because this process will also take a lot of time, and it cannot be lost, because new centres of conflict may appear during this time.”

Nogoibayeva continued, "Kyrgyzstan should understand: yes, the elections were terrible and violated people’s dignity. But if we do not agree on the rules now, then the violation of these rights will be much worse, already at the physical level.”

Giving Voice, Driving Change - from the Borderland to the Steppes
Kyrgyzstan
Crisis, Elections, Protests
Connect with us