Local producers say they can now plant and harvest their fields all year round.

Local producers say they can now plant and harvest their fields all year round. 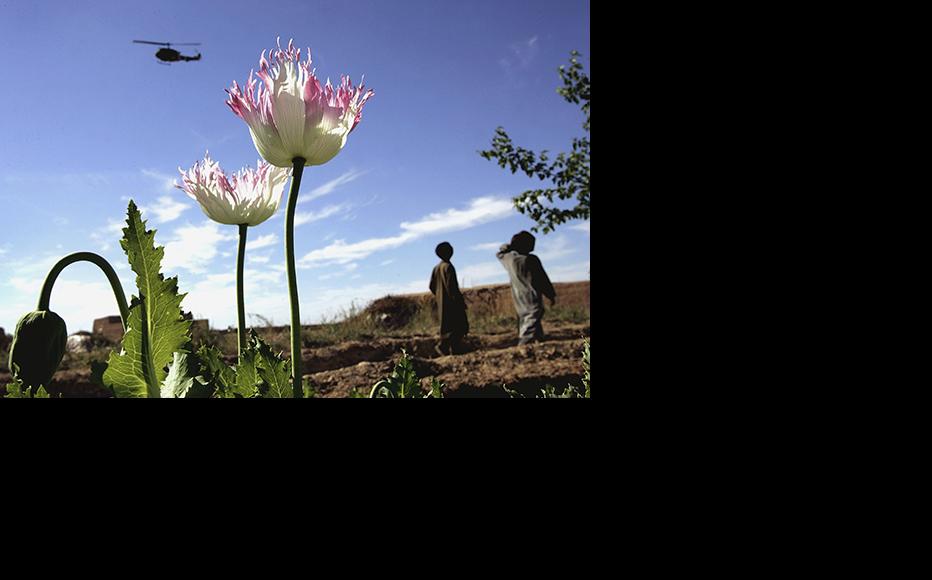 Karam Khan, an opium poppy farmer from Helmand, is delighted that business is booming.

New strains of seeds mean that poppy could be sewn and harvested all year round, he said, and shrinking government control over the province has left farmers free to cultivate the illegal crop.

“We used to plant poppy once a year and collect just one opium harvest,” Khan continued. “But now there are new seeds available on the market, so we can plant and grow and collect the opium harvest across all four seasons.”

These so-called “Chinese seeds” are famously productive, he explained, and farmers are happy to get the chance to make more money.

“Security is not good in Helmand,” Khan said. “In addition, high youth unemployment and a lack of factories or businesses to provide jobs have forced people to begin growing poppy as they have no other option. I don’t think people can be blamed for cultivating poppy.”

According to the most recent figures from the United Nations Office on Drugs and Crime, poppy cultivation across Afghanistan has increased by 43 per cent in 2016 compared to 2015.

Produced together with Afghanistan’s counter-narcotics ministry, the report also found that 4,800 tonnes of narcotics were manufactured in the country last year as compared to 3,300 tonnes in 2015.

As in previous years, Helmand was the leading producer of drugs. In 2016, 40 per cent of all Afghanistan’s poppy was grown in the southern province.

Observers agree that a number of factors may explain rising production.

Reports that new strains of poppy were appearing in Afghanistan began in 2015, with genetically-modified seeds apparently originating from China where some opium is farmed legally for pharmaceutical purposes.

In Helmand, counter-narcotics director Syed Ahmad Wror also noted that the insurgents had made inroads into many parts of the province previously controlled by government forces.

That had a knock-on effect on poppy cultivation, he explained.

“The insurgents force people to cultivate poppy in the areas under their control,” Wror continued, explaining that poppy cultivation had previously been nearly eradicated in the districts of Nawah, Nad Ali, Garm Ser.

However, these areas were now completely or largely under the control of the insurgents, which meant that tens of thousands of hectares had been added to land used for poppy cultivation.

He also said that the introduction of a new strain of poppy seed had made the fight against narcotics even harder. In the past, poppy could only be grown at a certain time of year and it took nearly six months from planting until the narcotic sap could be harvested. These new seeds shortened the plant’s growth cycle to around two months.

“Nowadays a kind of poppy seed known as ‘Chinese seed’ has become well-known amongst the public,” Wror said. “These seeds produce a harvest in all four seasons which means that poppy can now be grown all year round.”

“We’ve discussed the issue of these new poppy seeds with the ministry of counter-narcotics,” he continued. “We’ve also shared the information about poppy being grown across all four seasons so that we can maintain our anti-narcotics campaigns not just in one season but all year round. However, we have not received any response from the ministry yet.”

Local producers say that the more widespread use of solar energy panels has also had an impact, making poppy farming cheaper.

Previously, the plant could only flourish in areas of the province irrigated by the Helmand river unless farmers had the money for fuel to run generators to pump water from deep wells.

Hafiz Mohammad, who has sewn his fields with poppy, said, “We used to take water out of deep wells by using generators, but now we use solar energy and it barely costs anything. Solar energy has enabled us to irrigate our poppy fields whenever we want.”

Umar Zwak, the spokesman of Helmand’s governor, acknowledged that poppy cultivation had risen over the last year.

He too attributed this to the gains made by insurgents and said that poppy had become their major source of income.

“Although the insurgents have gained control over many areas, the Afghan government is still fighting them,” he said, adding, “The government is working hard to eradicate and remove poppy cultivation in the districts.”

Wror also maintained that the ministry of counter narcotics was hard at work across Afghanistan, with a particular focus on Helmand.

“Public awareness programmes are implemented every year, anti-narcotics banners are prepared, brochures and other publications explaining the harm narcotics can do are distributed to students at schools, and counter-narcotics campaigns are organised which have been very effective in fighting narcotics,” he said.

“The government doesn’t have any effective policy to eradicate narcotics,” he told IWPR. “Every year millions of dollars are spent on reducing narcotic production, but poppy cultivation has increased not decreased.”

He said that a new approach was badly needed.

“The government should come up with a policy according to which opportunities are created for people to grow legal crops. Many people cultivate poppy because of poverty; they earn more from poppy than from growing vegetables so this is the way they solve their problems.”

Afghan added, “If all the money spent on eradicating narcotics each year was spent on fundamental infrastructure works - for example, building factories, businesses, water dams and canals – it will create job opportunities and people will never complain about unemployment and economic difficulties again.”

“People can’t be blamed [for growing poppy] because the government has not been able to protect them and they live amidst insecurity. When the villages and districts arn’t secure, it’s clear that people’s economic situation will be bad and that locals will be impoverished. So they have to cultivate poppy even if they know that it’s illegal.”

He added, “Poppy farming will not be prevented unless security is improved, basic infrastructure projects are implemented and the government creates job opportunities for both the educated and uneducated young people of the country.”

Meanwhile, local producers are busy planting the so-called Chinese seeds and making the most of their new, improved yield.

“Now I grow poppy in the summer, winter, autumn and spring,” said Wahidullah, a farmer.

“I’m very happy because this is the only source of income we have. These days I earn a lot of money.”