Probe into murder of satirical blogger has yet to yield results, fuelling anxiety among rights groups and media workers.

Probe into murder of satirical blogger has yet to yield results, fuelling anxiety among rights groups and media workers. 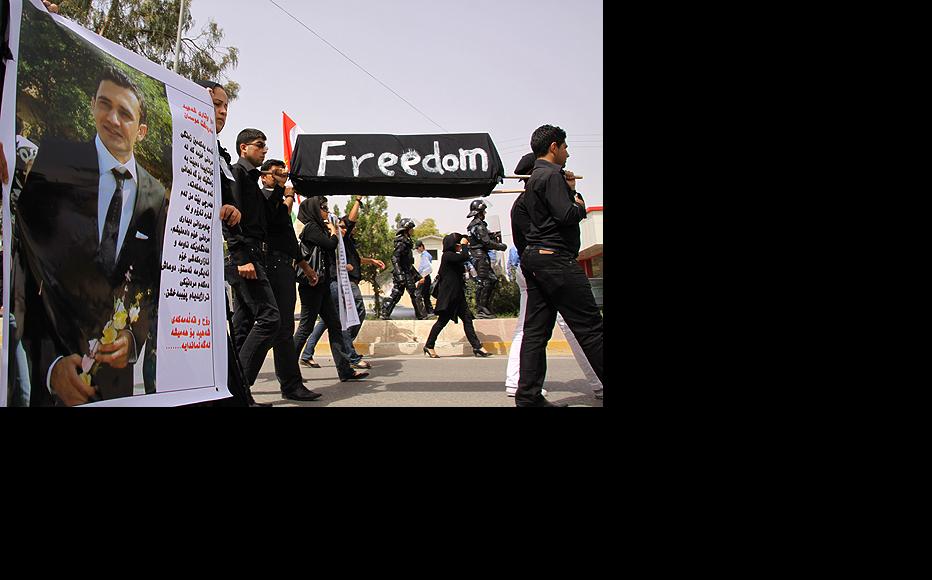 The killing of Sardasht Osman, a student journalist, sparked unprecedented street protests in Iraqi Kurdistan. (Photo: Rafeq Shukri/Metrography)
The link has been copied

Iraqi Kurdish authorities are facing renewed pressure to demonstrate their professed commitment to press freedom by taking action over the recent murder of a student journalist.

An international human rights group and a media watchdog have said they are troubled by the apparent lack of progress in an inquiry into the killing of Sardasht Osman more than two months ago.

Local journalists working in private and opposition media have also said they fear the unsolved murder is intended as a warning to critics of the semi-autonomous region’s government.

However, a top official from the Asayish, the Kurdish security agency, defended the conduct of the inquiry, insisting that any thorough investigation required patience and discretion.

“It is a security issue,” said Nerwan Azhee, an Asayish spokesman. “You cannot reveal the progress of the investigation. Everything must be kept secret until all matters are finalised.”

Kurdish officials have also warned it is premature to link the killing to an assault on free speech until the results of the inquiry are known.

Rights groups and journalists have said the Kurdish authorities are running out of time to show they are sincere about tracking down the journalist’s killers.

“We are concerned by what appears to be a lack of real progress to date,” said Malcolm Smart, Middle East and North Africa programme director for the London-based human rights group, Amnesty International.

“The investigation into Osman’s abduction and murder needs to be pursued with all possible vigour and rigour,” he said.

“This would be an important way for [the Kurdish authorities] to demonstrate that they will not tolerate attacks on journalists and bloggers or others who express their views.”

Mohamed Abdel Dayem, programme co-ordinator for the Middle East and North Africa at the Committee to Protect Journalists, CPJ, a New York-based media watchdog, said the lack of transparency in the inquiry was disturbing.

“We’re not sure that there is actual progress beyond the government’s announcement of its intention to investigate,” he said.

“Perhaps the government is trying to keep the investigation in the forefront – or perhaps it is letting it fade from the public eye,” he said. “So far, we have little reason to be optimistic.”

Osman was abducted on the morning of May 4 from the gates of his university in Erbil, capital of Iraq’s Kurdish region.

The body of the 23-year-old student of English was discovered a day later in Mosul, a violent city over an hour’s drive west of Erbil, outside the official boundary of Kurdistan.

The killing led to unprecedented street protests in the usually calm region. The attack was condemned in opposition and independent media outlets, which portrayed Osman as the victim of a crackdown on free speech.

Many questioned how the abducted journalist could have been moved between Erbil and Mosul without the knowledge of the security forces. Security is tight on the road linking the two cities, with several checkpoints monitoring traffic in an area largely under Kurdish control.

Critics of the government believed Osman had been killed for producing satirical articles that referred to the apparently lavish lifestyles of top politicians and their families.

Such subjects are considered deeply controversial in Kurdistan, a conservative region whose governing class is drawn from clans that are still revered for spearheading decades of guerrilla struggle against Baghdad.

In an interview with IWPR in May, a spokesman for Masrour Barzani, Kurdistan’s top security official, rejected claims linking the security forces with Osman’s killing.

The spokesman also accused the government’s opponents of exploiting the murder for political ends. He said it was premature to speculate on a motive for the crime or to link it to press freedom while an official investigation was still in progress.

The government inquiry into Osman’s killing was announced in the week following his death. An official press release said the investigation would be unprecedented in scope, aided by anti-terror units and overseen by the interior ministry.

Foreign diplomats based in Kurdistan, including representatives of the United States and the European Union, said they hoped the inquiry would be swift and thorough. Statements issued by their missions also re-iterated their support for free speech in the region.

More than nine weeks after the murder, no arrests have been made. Few details have been released about the inquiry’s work. The composition of the committee heading the investigation remains unknown.

Rights groups say they are worried by an apparent lack of progress.

“I am very alarmed that nothing has come to light since the government announced the investigation,” Dayem, of the CPJ, told IWPR.

Citing the Kurdish authorities’ strong track record for solving crimes, he said he believed the slow progress in the Osman investigation was down to “reasons other than a lack of technical capacity”.

Smart, of Amnesty International, said the committee heading the inquiry did not conform to international standards that demand independent investigations into allegedly serious human rights violations.

“Clearly, an inquiry composed of representatives of government security agencies cannot be considered to be independent,” he said.

Azhee, the Asayish spokesman, defended the inquiry and said it had not faced any unusual hurdles.

“There has been no difficulty... Such investigations require time,” he said, adding that the timeline for the investigation was “indefinite”.

Azhee also said the composition of the inquiry suited its purpose. “An investigative committee cannot be formed on a whim,” he said. “It needs professionals.”

He ruled out allowing international observers to join the committee, but said they were welcome to monitor its progress.

Azhee also hit back against journalists who had claimed the inquiry committee was biased, saying they were “creating distrust between the people and the security forces”.

A Kurdish security official, who asked not to be identified, has told IWPR that all the members of the committee were close to the Kurdistan Democratic Party, KDP, one of two partners in the region’s government.

IWPR also sought comment on the inquiry from the Kurdish region’s interior ministry, its prime minister and from its top security official. None of the requests were answered.

Criticism of the inquiry has been growing among relatives of the dead journalist and media workers employed by outlets critical of the government.

“We are really concerned that nothing has been done yet,” said Bakir Osman, the brother of Sardasht Osman. “It has made us ask a thousand questions... What kind of committee is not able to find anything out in 40 days?”

Helgurd Samad, a journalist for Lvin, a magazine often critical of the authorities, said the investigative committee was formed merely “to soothe angry people”.

The killing, he said, had unnerved journalists critical of the government, “My relatives tell me I will end up like [Osman] if I don’t quit my work.”

Burhan Qadir, a journalist for Hawlati, a privately-owned newspaper that has also often criticised the government, said he had left his job after the killing because of pressure from his family.

“There is no one protecting me. I am by myself.... [Osman] hadn’t written as many critical articles as me. So why shouldn’t I be afraid?” he said.

However, Karim Qadir, a journalist for Khabat, a newspaper linked to the KDP, said there was no indication that Osman had been killed for his writing.

“Osman was not a journalist, he was a university student,” he said, adding that he believed the Kurdish press was relatively free. “Every kind of newspaper and magazine exists here and they produce whatever they like, including libel.”

Qadir said he was concerned that Osman’s killer had yet to be found, but felt the investigation should not be rushed. “The more time it takes, the more accurate it will be,” he said.

Azhee, the security official, also dismissed concerns that Osman’s killing would have any effect on press freedom in the region.

Though violence against journalists has been a hallmark of the conflict in Iraq, the bulk of these attacks have taken place outside the relatively stable Kurdish region.

Recently however, rights groups say threats and attacks against media workers have increased in Kurdistan – defying the trend for the rest of the country, which has become somewhat safer for journalists.

“Regardless of the motive behind [Osman’s] murder, I believe his killing will have a chilling effect on many journalists in the region,” said Mariwan Hama-Saeed, the director of Metro Centre to Defend Journalists, a media rights group based in the region.

“Reporters will think twice before they publish articles that tackle sensitive issues.”

The Metro Centre, an IWPR Iraq programme, has served as a representative for Osman’s family and is advocating for justice in his case. It is independent of IWPR’s media operation, and has no influence on editorial output or policy.

Some journalists in the region say they want foreign governments to take a closer interest in the Osman inquiry to ensure it fulfills its function.

Envoys of the US and EU have made no official comment since the initial statements they released immediately after the killing in May, in which they urged the Kurdish authorities to take swift action.

A US diplomat in Erbil, speaking to IWPR on condition of anonymity, denied that the case had been swept under the carpet.

Iraq
Media
Connect with us