Bringing Water Back to Kafr Nabl

Bringing Water Back to Kafr Nabl 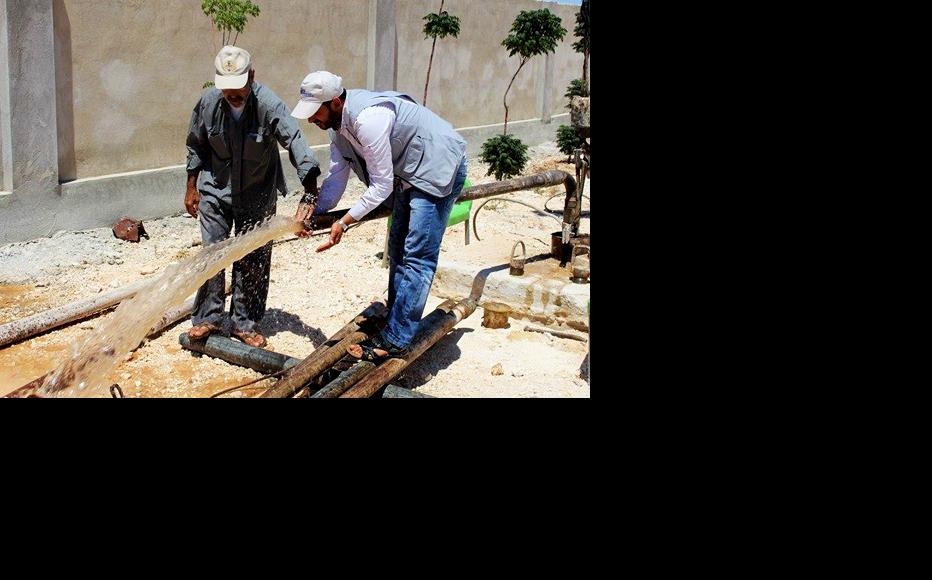 Fixing the water supply for homes in Kafr Nabl. (Photo: Nisreen al-Ahmad)
The link has been copied

Locals in Kafr Nabel have high hopes of a revived water pumping scheme which aims to solve ongoing shortages in many liberated areas.

A project to solve this crisis was first launched in June 2014 by the Union of Revolutionary Bureaus in the western countryside of Maarrat al-Nu’man.

It drilled five wells, equipped two of them with machinery and linked them to the main network providing water to Kafr Nabl and its surroundings.

After completing the project in 2015, the Union of Revolutionary Bureaus handed it over to the local council in Kafranbel.

But the water only flowed for a short time before funding ran out.

Osama al-Ahmad, a member of the board of directors of the Union of Revolutionary Bureaus, said, “We prepared infrastructure for a pumping station, consisting of two equipped wells out of five wells we had drilled, in addition to two submersibles, two pumps and a large water tank with a capacity of 300 cubic metres. We linked these to the main water network of Kafr Nabl in 2015 and we pumped water for two months. But after delivering the project to the local council, the latter wasn’t able to run the project for more than 10 days because of a lack of capacity.”

Kafr Nabl resident Hussain, 33, said, “Water costs became a burden, especially now that the owners of private wells are selling water at high prices, with the cost of a single tank 1,800 Syrian pounds, and each family needs nearly eight tanks per month, which costs approximately 15,000 Syrian pounds and this sum is too large amidst our squeezed living conditions.”

But last August, the Humanitarian Relief Organization took over the scheme in coordination with the local council and work resumed. The plan is for water to be pumped to all parts of the city and neighbouring areas.

Hussain said that he was already feeling the benefits, adding, “The water project is important and fulfills an essential need. Now, I can get close to one tank each week, which is the equivalent of half of my monthly water needs.”

Ibrahim Shannan, 35, is the manager of water projects at the Humanitarian Relief Organisation.

“The Kafr Nabl water station provides water to Kafr Nabl and the villages of Bureij, Jidar, Maarrat Mukhis and Basqala. The local council approached us to be the entity authorised to re-pump water and to complete the processing of the remaining wells.”

Shannan explained that they had assessed the water share of each household to be 33 litres per day.

“We provided all the necessary chlorine, diesel and filters for the continuation of the project in the following months. Following that, a private collection system will be adopted after agreeing upon it with the local council and training the staff.”

Mustafa Sheikh, 46, head of Kafr Nabl’s local council, said, “The water project was first implemented by the Union of Revolutionary Bureaus which continued supporting it for two months after its completion. The organisation provided us with diesel during this period. But after the contract ended and the project was delivered, we couldn’t run it for more than ten days, due to lack of funds.”

The scheme was only able to continue thanks to the Humanitarian Relief Organisation, he explained.

“It processed the remaining wells and provided two giant generators and operational support for five months, for eight hours a day with a possibility of increasing the number of pumping hours to 12 hours,” Sheikh continued, but noted that the long-term future of the project was still not secure.

Nisreen al-Ahmad, 33, is from Kafr Nabl in the Idlib countryside. The mother-of-two had to give up studying Arabic literature during her third year of college due to security conditions.

Syria
Life, Reconstruction
Connect with us