Breakthrough for Outsider Party in Kyrgyzstan

System may be changing, slowly, so that policies become more important than politicians.

Breakthrough for Outsider Party in Kyrgyzstan

System may be changing, slowly, so that policies become more important than politicians. 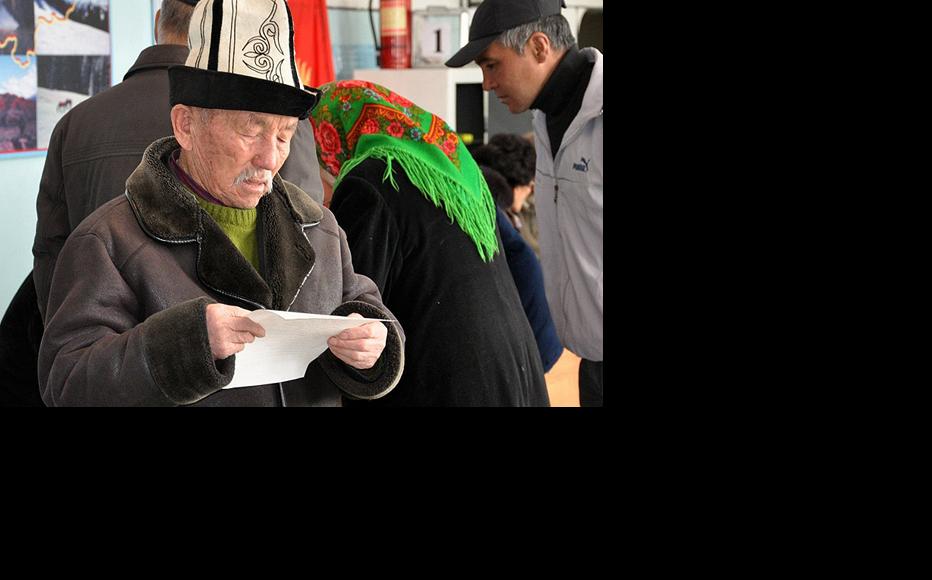 A voter in Balykchi during local elections held in March 2012. (Photo: Zamandash website)
The link has been copied

Perhaps the most remarkable result of the local elections held across Kyrgyzstan on November 25 was the success enjoyed by the Zamandash party, a relative newcomer.

Zamandash, also known by the Russian equivalent Sovremennik, meaning “Contemporary”, took six of the 45 seats on the city council in Bishkek, the capital and the hub of political activity.

Modest though that may seem, it is an indication that in a country dominated by personality politics, possessing ideas and a coherent set of policies is also beginning to count for something.

These local elections were the first in which all seats were filled from party lists – a proportional representation system – rather than allowing unaffiliated candidates to stand as well.

Most but not all of the well-established parties did reasonably well in the polls. The ruling Social Democrats won a relative majority in 11 out of 25 towns, including Bishkek where it took 21 seats and its coalition partner Ata-Meken another seven.

However, the third coalition partner, Ar-Namys, won no seats in the capital, which is surprising given that its electoral stronghold is in northern Kyrgyzstan.

The Social Democrats and the Respublika party of ex-prime minister Omurbek Babanov, now in opposition, pumped the most money into their campaigns. But others like Ar-Namys seem to have assumed that being in power would be enough to see them through, and put little effort into campaigning.

Founded in 2007, Zamandash claims to represent the interests of the hundreds of thousands of labour migrants from Kyrgyzstan who work in Russia and Kazakstan.

In the 2010 parliamentary election, it failed to win any seats, and it suffered a real blow last year when its founder Mukhtarbek Omurakunov, died in a drowning accident.

Zamandash was neither deterred not complacent after these setbacks. It continued to work closely with its electorate, investing time and effort in outreach and mobilisation. It also adopted a flexible approach, negotiating with other political groups to form alliances to campaign on specific issues. Finally, it has not been involved in the corruption scandals and feuding that are common among more established parties.

Skills like these are becoming increasingly important in Kyrgyzstan, as the electoral system encourages a wider field of parties and makes it harder for incumbents to use state media and institutions to secure election victory – or to fix the result, as happened in past years.

Nor is it enough to rely solely on having one big political figure around whom the party is built, and to rely on a particular regional or tribal affiliation, or narrow nationalism, to get out the vote.

One reason for Zamandash’s popularity is that the wave of Kyrgyz nationalist sentiment that swept the country after the ethnic violence of June 2010 seems to be dying down. In contrast to the exclusivist agendas of some other groups, Zamandash is explicitly inclusive – some of its leading members are ethnic Russians – and favourable towards Russia, where so many of its voters work.

In an economic climate in which the government is unable to raise living standards, Zamandash’s policies fit with the public mood.

Russia is both a massive employer of Kyrgyzstan nationals and an investor in the Central Asia state’s economy.

World Bank figures indicate that the money sent home by Kyrgyz migrant workers in the January-October was equivalent to almost one-third of the country’s gross domestic product. With such a contribution to the economy, it is unsurprising that the importance of the migrants as a constituency is growing.

Moscow is also viewed favourably as a provider of investment and loans, and as a traditional ally, its motives for doing so are not viewed with as much suspicion as Chinese or western assistance.

Since 2010, Kyrgyzstan has been engaged in an experiment with parliamentary democracy, after constitutional changes that weakened the traditionally strong presidency and gave more powers to legislators.

Pluralism means just that – no single party can dominate politics any longer. The downside might be frequent turbulence in government, but the system is forcing politicians into a realisation that compromise and coalition-building may be more productive than combative, accusatory posturing. This is especially true since widespread disillusionment with their public squabbling could cost them the parliamentary election in 2015.

Pavel Dyatlenko is a political analyst with the Bishkek based think-tank Polis Asia.