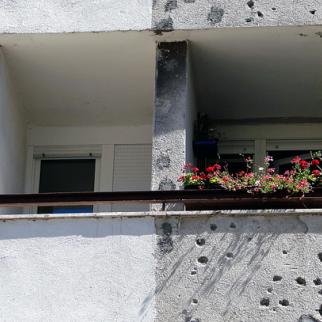 While many war-damaged buildings have been repaired since the conflict ended, the psychological scars remain. (Photo: Adam Jones/Flickr)

I don’t think that anyone can remain indifferent when faced with patients suffering from the Post Traumatic Stress Disorder, PTSD. I will never forget Sefer Husnija, the first man I interviewed for the story I was working on for IWPR. He was diagnosed with PTSD in 2004, almost ten years after Bosnia’s 1992-95 war, and the suffering I had seen in his eyes haunted me long after the interview was over.

I remember feeling shaken and profoundly moved, and yet so helpless. I wanted to help him, but didn’t know how.

I was only four when the war in Bosnia started and was too young to remember all its horrors, but I was aware that many of those who did remember had hard time coping with their memories.

According to the official data, some ten per cent of Bosnia’s population is suffering from PTSD, but associations helping PTSD patients claim that number is up to five times higher.

These people have very difficult lives. Struggling with unemployment and stigmatized by society, they often don’t see a way out of their situation. The more desperate have even committed suicide.

I must admit this was not an easy story for me to work on. I didn’t know how to ask PTSD patients about their past without causing them even more pain. I wasn’t even sure it was ethical to bring back their terrible memories and make them relive those traumas again.

Husnija, a PTSD patient from Sarajevo, was the first person I interviewed for the story about people in Bosnia suffering from this disorder.

Although at the beginning of our conversation he had said he didn’t like talking much, he eventually opened up to me and spoke frankly about the problems he was facing in his everyday life.

He even thanked me, an ordinary journalist, for an opportunity to have an honest and open conversation with someone willing to listen to his problems. Visibly shaken, he told me that he was often contemplating suicide because he saw no point in living, and that only faith in God prevented him from doing that.

Although I expected obstacles in doing this story it, I didn’t encounter any. I thought people would be reluctant to talk to me about PTSD because of the stigma surrounding it. However, all my interviewees readily answered my queries, even though some of those questions must have been very difficult for them.

I was truly impressed by the fact that PTSD sufferers were ready to talk about their personal issues to me, a complete stranger, simply because they believed that better understanding of problems PTSD patients are dealing with could actually help them lead a more normal life.

Also, before doing this story, I hadn’t realised how much external support meant to people affected by PTSD. One of the people I interviewed told me that weekly gatherings of PTSD patients he attended regularly were the only thing that kept him going; that they forced him to socialise and prevented him from withdrawing into himself and falling into depression.

It was heartbreaking for me to hear that this man, who had been through hell during the war, couldn’t find a job because no one wants to employ people suffering from PTSD.

But I was also encouraged to see that there are many PTSD patients’ associations throughout the country, which help these people feel less isolated and give them an opportunity to share their problems with others and socialise.

Many of these associations claim that the state is not doing enough to help PTSD sufferers. Although patients can seek help in one of many psychiatric clinics and mental health centres throughout the country, the problem is that they often cannot afford the expensive medication they need to take in order to feel better.

The medication is only partly covered by their health insurance and since many of them are unemployed, they don’t have enough money to cover all the costs. This then becomes a vicious circle, because if they don’t receive proper medicines, they cannot function normally, nor work.

I got interested in this issue primarily because in Bosnia PTSD is almost always mentioned in a negative context and there is a lot of prejudice against people suffering from it. Writing this story made me understand how important it is for the Bosnian public to become familiar with this syndrome and to realise that people suffering from it are not crazy, as they are often perceived.

It is important to emphasise that people with PTSD can lead completely normal lives if they are under medical supervision and receiving adequate treatment, and that they pose no danger for the society.

I am convinced that telling stories like this one can have a positive effect on PTSD patients; can give them hope that their situation will improve; and that their problems will be recognised and dealt with properly, by the whole of society.

Amina Milic is an IWPR-trained reporter in Sarajevo.