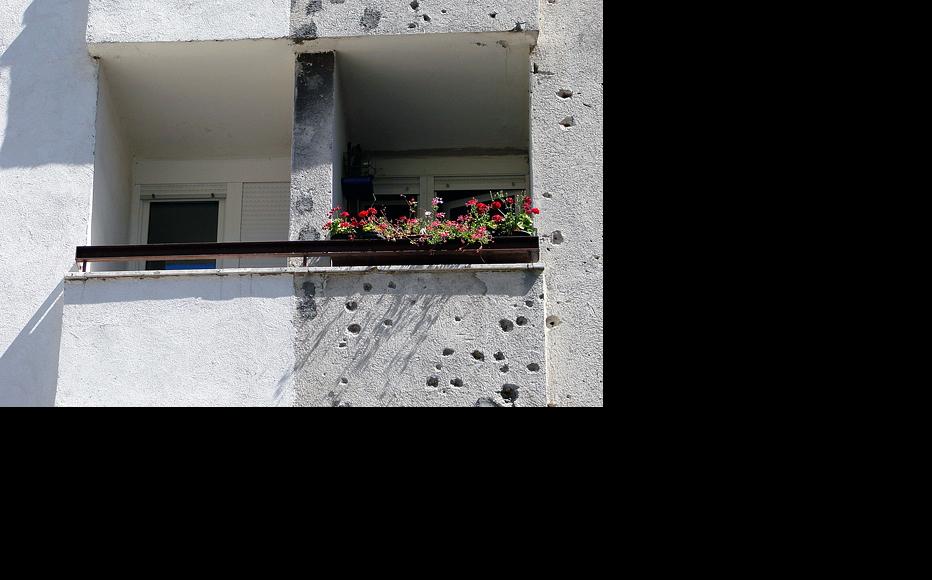 While many war-damaged buildings have been repaired since the conflict ended, the psychological scars remain. (Photo: Adam Jones/Flickr)
The link has been copied

Sefer Husnija’s light blue eyes are full of sadness, his gaze flickering around anxiously as he relates the psychological damage he still contends with, nearly 20 years after the Bosnian war.

In 1993, Husnija, now 50, was detained in a prison camp in his hometown of Prozor, held by Bosnian Croat forces. A Bosniak, he spent two months there and was only released, he claims, because the guards thought he was about to die as a result of torture and starvation.

Although Husnija survived the war and moved permanently to Sarajevo, he is still haunted by his traumatic experiences.

In 2004, he was diagnosed with Post-Traumatic Stress Disorder, PTSD, at the university clinic in Sarajevo, and still receives hospital treatment twice a month.

“I don’t want to talk about the time I spent in the prison camp because I start feeling the same fears and can’t sleep for days afterwards,” he said. “I have nightmares all the time. No one knows what I and other prisoners have been through.”

But Husnija finds some relief from his regular Thursday visits to the Sarajevo-based association Zivot (Life). Once a week, some 250 people suffering from PTSD as a result of the 1992-1995 Bosnian war, gather there and talk about their problems.

For Husnija, it is an opportunity to “rest his soul”.

According to the World Health Organisation, ten per cent of Bosnia’s population, or 400,000 people, have been diagnosed with PTSD. Associations who help people suffering from PTSD, however, claim that the true number is close to 1.7 million people, nearly half of the country’s population.

In the Sarajevo area alone, between 50,000 and 55,000 demobilised soldiers have been diagnosed with PTSD.

And in 2008, a mental health study was conducted in Republika Srspka, RS, amongst 553 former soldiers of the Bosnian Serb army, VRS, and showed that 45.4 per cent of these war veterans had some form of PTSD.

Dr Nermina Kravic, who works in a psychiatric clinic in Tuzla, said that PTSD develops following situations when people feel threatened and when their life or lives of members of their families are in danger.

“This feeling of hopelessness remains even after the source of stress is long gone, causing disorders characteristic for PTSD,” she said.

Dr Alma Dzubur Kulenovic, a psychiatrist at the university clinic in Sarajevo, said that PTSD patients tend to avoid situations which remind them of their past trauma.

In time, this affects their lives so badly that they cannot function normally at all. Most patients also have terrible nightmares.

“The first thing these people complain about are nightmares which seem very realistic, unlike normal dreams,” she said. “They wake up from these dreams in horror, screaming, sweaty, with their heart bumping, grasping for air.”

“For me, every day is hard. I cannot sleep at night. These last few days, something has been bugging me... I wake up at 5 am and cannot go back to sleep,” he said.

He prefers to be alone, finding it difficult to be around noise and laughter, and knows that his wife and two children have suffered as a result of this.

“I feel sorry for them, but I know no other way,” he said.

As a former prison camp detainee suffering from PTSD, Husnija is entitled to a pension equivalent to 215 US dollars per month. His wife is unemployed, and the whole family subsists on this small stipend.

“When my son and daughter ask me to give them some pocket money for school and I don’t have anything to give them, I feel like crying,” he said. “I often think about committing suicide, but I am afraid of God.”

Experts say that due to a high rate of unemployment, the number of people showing symptoms of PTSD has increased, and warn that some forms, if not treated adequately, can lead to self-harm and aggression towards others.

According to data from Stecak, a Tuzla-based association of PTSD patients, 900 demobilised soldiers diagnosed with the condition have killed themselves since the end of the war. Stecak attributes this phenomenon to poverty, combined with inadequate psychological treatment.

“A person with PTSD will commit suicide if unhappy and sick, but if he is under supervision and takes his medications regularly, this should not happen,” Dzubur Kulenovic explained.

Mina Mujic, 50, from Srebrenica has also been diagnosed with PTSD and she too suffers from insomnia. In July 1995, when Srebrenica fell to Bosnian Serb forces and more than 8,000 Bosnia men and boys were killed, she lost a brother and 18 members of her extended family.

“I like being alone. I don’t like listening to people talking and prefer silence and contemplation,” said Mujic, who is unemployed and lives off her land and cattle.

There is no centre for mental health in Srebrenica where PTSD patients could receive psychological help.

“I am being treated in Tuzla, because it cannot be done here,” Mujic said. “People… should be asking for money for a hospital to be built [in Srebrenica], for doctors to be brought here, for factories to be built and people employed. That way we would have less traumas, less problems.”

Unlike Husnija and Mujic, Edis Sladic, another former soldier suffering from PTSD, likes the company of other people.

“I need to communicate with people regularly, or I would withdraw from normal life completely and spend all my time at home,” he said.

Sladic, a Bosniak from Sarajevo, was diagnosed with PTSD in 2003.

“All the images of war started coming back to me, images of some dear people who fought by my side, who lost lives in battles around Sarajevo,” he said.

Sladic and his family also subsist on his monthly 215 dollar pension and he says he has been unable to find a permanent job, partly because of prejudices potential employers have about PTSD sufferers.

“People do not employ those diagnosed with PTSD willingly. Once you say you suffer from PTSD, people think you are crazy. That is how they label us,” Sladic said.

This stigmatisation is one of the biggest problems faced by sufferers.

“In the whole of BiH, people have prejudices against those who have mental health issues,” said Dragan Sajic, president of Jedinstvo, the association of PTSD patients in Banja Luka. “As a result, those affected by PTSD are ashamed to even mention they are seeing a psychiatrist.”

His association focuses on explaining to PTSD patients that going to a psychiatrist is not shameful. Sajic believes that problems of PTSD patients would be easier to solve if they managed to deal with society’s stereotypes of sufferers and “the feeling that they will be laughed at by other members of their community”.

PTSD patients in RS do not get much support from public institutions either. The annual budget for PTSD patients’ associations is around 3,100 dollars - which is not enough, Sajic says.

“We have around 200 members, but we work with a bigger number of patients. A lot of people are afraid to become members of our association. They come to us, we know who they are, but they are afraid of society. If they work in the private sector and their employer finds out they suffer from PTSD or visit a psychologist, they immediately get laid off,” he said.

Sajic explained that his association was trying to educate society about PTSD by distributing brochures and leaflets and organising round tables on the issue.

“That way, people get more information about this problem and are less likely to have prejudices about PTSD patients,” he said.

Studies have shown that 50 per cent of people suffering from PTSD have a greater chance of getting better if they ask for medical help early on, while amongst the other half the disorder usually becomes chronic.

“One of the most important elements of therapy and rehabilitation of people suffering from PTSP is employment and integration into the community,” Goran Cerkez, assistant to the federal minister of health, said. “However, we are still far from reaching this goal, due to the country’s bad economic situation and the high rate of unemployment.”

The federal ministry of health, and the ministry of health and social protection of RS, in cooperation with the Swiss government, are preparing a project aimed at improving mental health in Bosnia. One of the goals is to develop activities to decrease the stigmatisation of those suffering from mental illness, including PTSD patients.

They are planning to increase education for professionals, as well as the media and wider society.

Milan Topalovic, assistant to the RS minister of health and social protection, said that recently conducted research on PTSD in the region showed that sufferers preferred to attend centres for physical rehabilitation rather than centres dealing with mental health.

“A part of this population is avoiding treatments because of the public’s negative attitude towards ill people,” he said.

Although there is no trauma centre in Bosnia treating PTSD exclusively, doctors say that sufferers can and should seek help in psychiatric clinics and mental health centres because failure to address the disorder can lead to even worse symptoms.

“The consequences [of not seeking help] are pretty bad, just like with any other chronic and untreated disease,” Kravic said. “PTSD, if untreated, brings suffering to patients and their environment - so it's better to seek help than deal with the consequences.”

Amina Milic is an IWPR-trained reporter in Sarajevo. Sanja Trifkovic and Dejan Petrovic from Srebrenica contributed to this report.

Bosnia and Herzegovina: Tales of Transition
Balkans
Connect with us