Bihac is one of the few places where conflict failed to drive a wedge between communities.

Bihac is one of the few places where conflict failed to drive a wedge between communities. 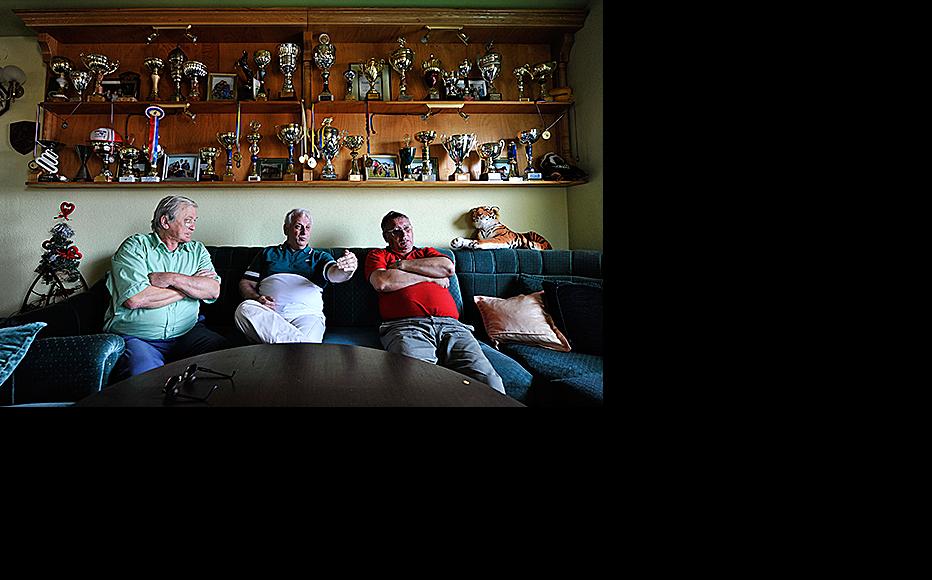 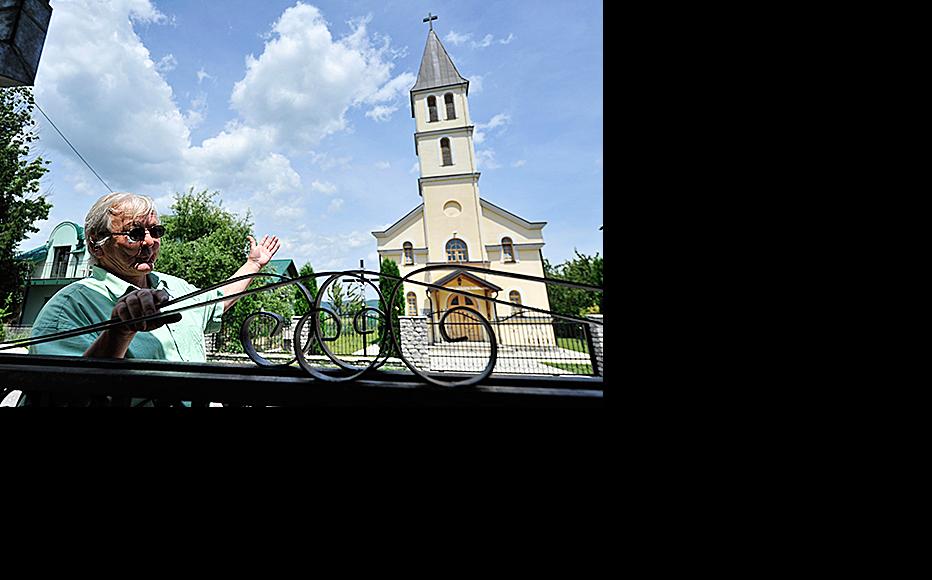 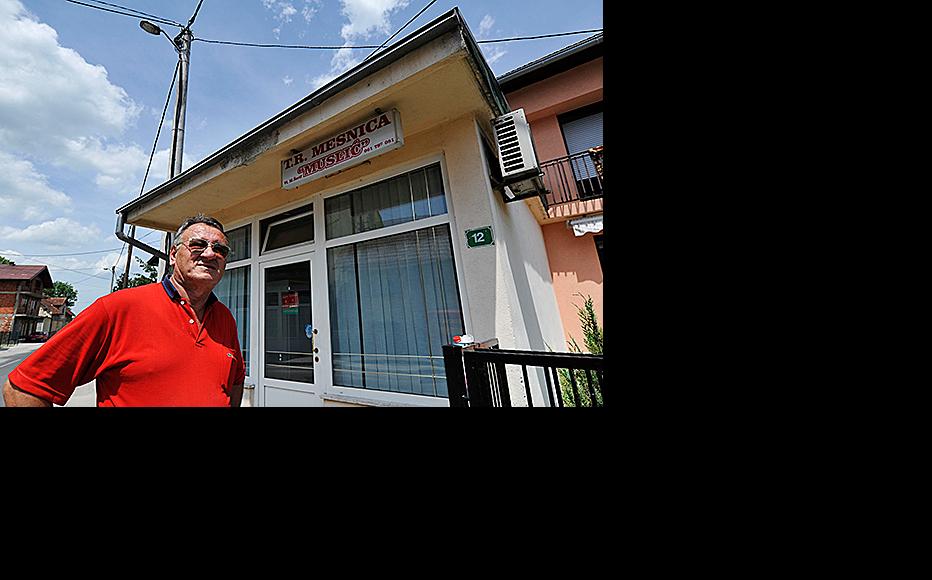 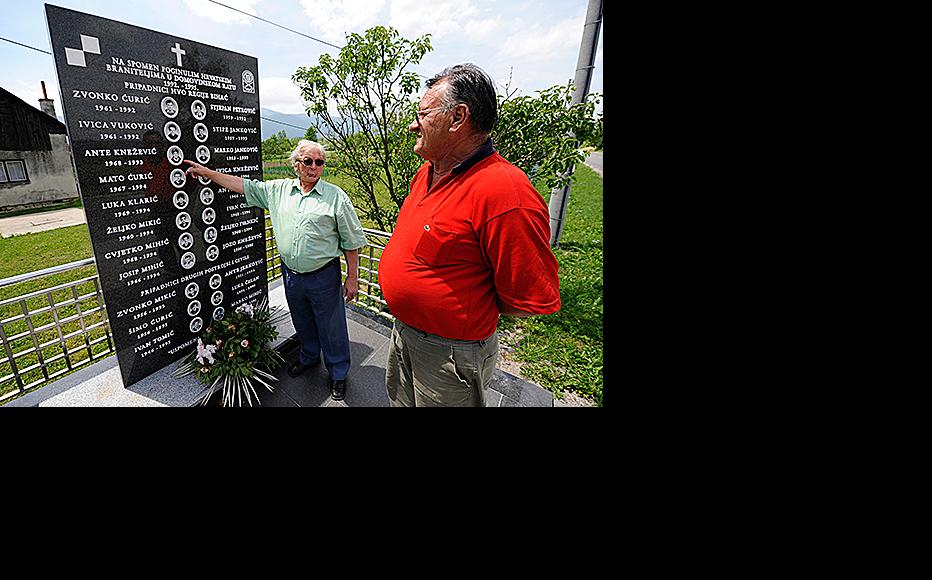 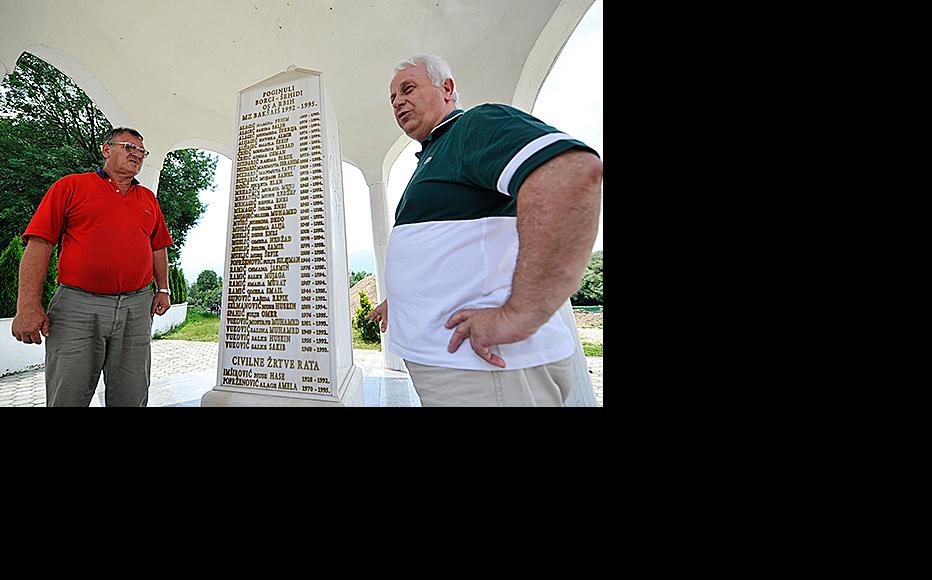 Osman Muslic (left) and Muhamed Alijagic standing by a memorial for Bosniaks from Baksais killed in the defence of Bihac. (Photo: Midhat Poturovic) 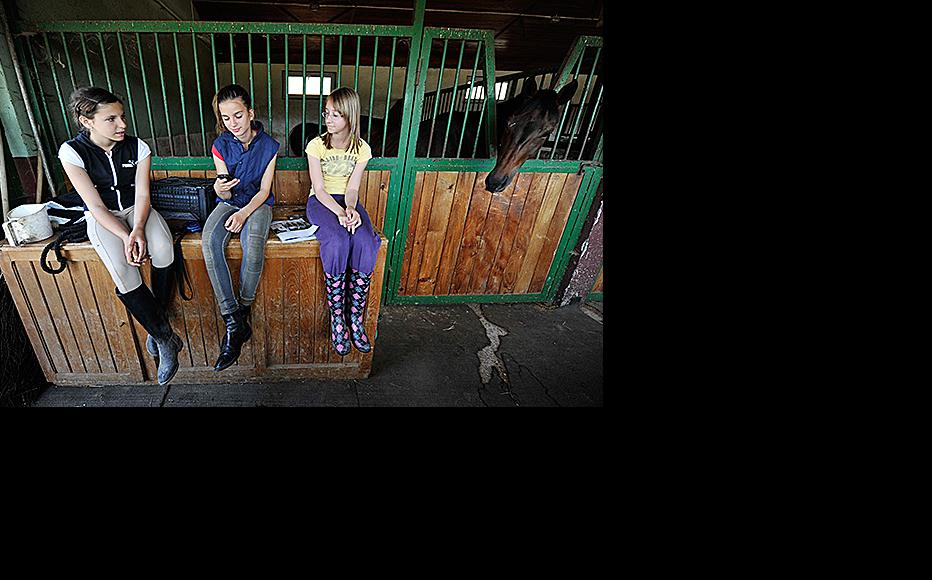 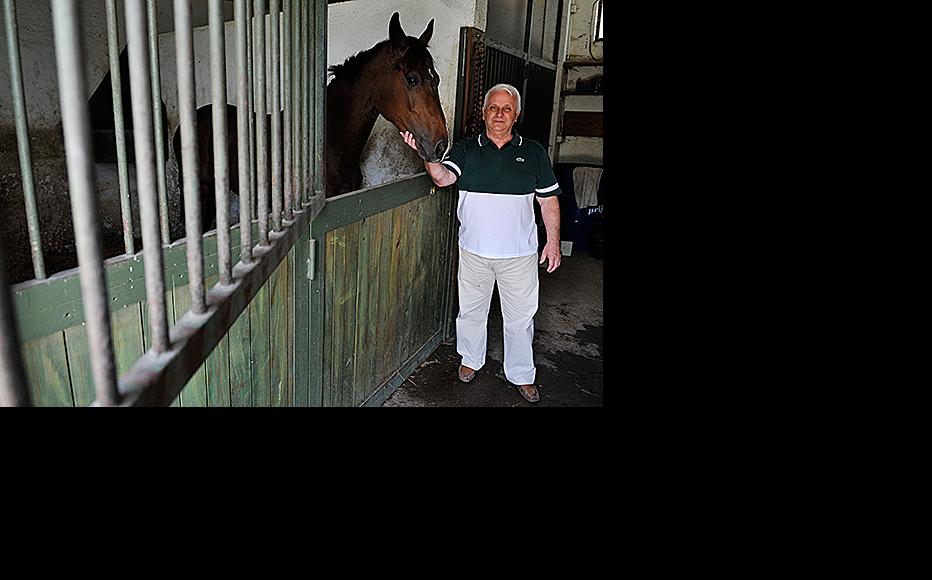 Muhamed Alijagic shows off one of his horses. (Photo: Midhat Poturovic) 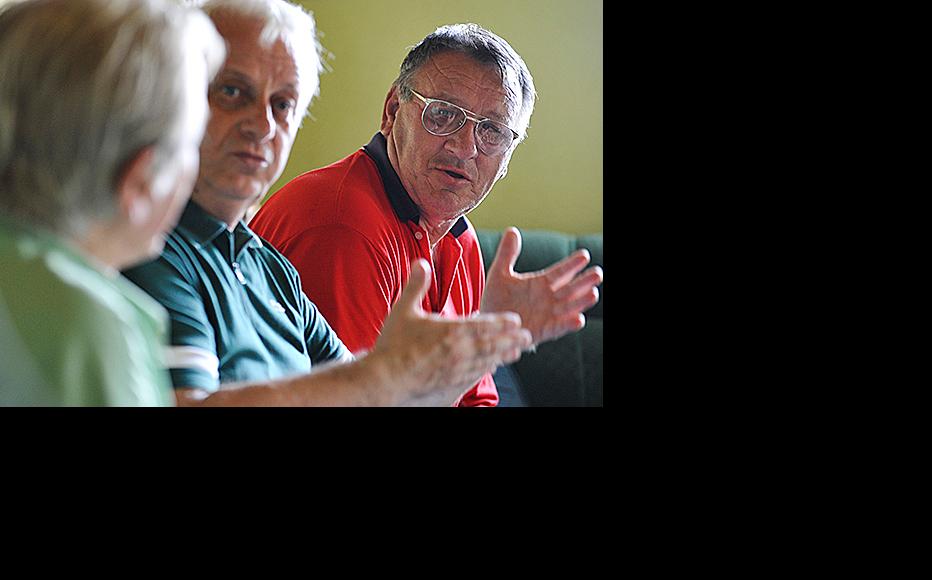 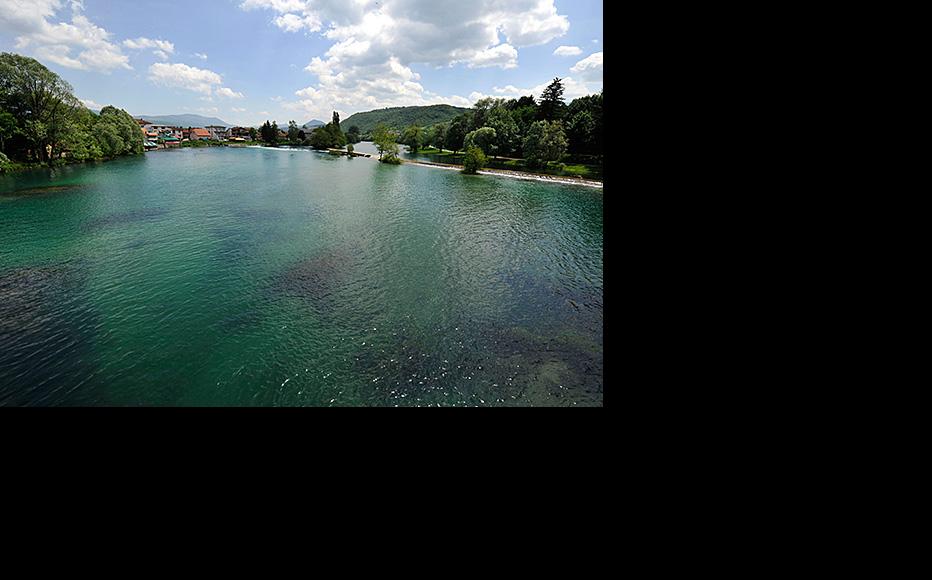 The river Una, which flows through Bihac. (Photo: Midhat Poturovic)
The link has been copied

“Your next-door neighbour is more important to you than your own brother living far away. That's what our elders taught us, and that is what prevented inter-ethnic clashes in Bihac during the war", Muhamed Alijagic said.

Bihac, a small town in north-western Bosnia is known these days for its natural beauty, especially the emerald-green Una river which runs through it. It attracts many local and foreign visitors every summer.

This is one of the very few places in Bosnia where different ethnic communities have preserved good relations despite the horrors of the 1992-95 war that tore the country apart.

Before the war, Bihac had a population of about 45, 000 people, 60 per cent Bosniak, 18 per cent Serb and ten per cent Croat. Since the last census was held in 1991, it is not known how these numbers changed as a result of the conflict. However, the town remains ethnically mixed.

Muhamed Alijagic, one of the town’s leading Bosniak residents, lives in Baksais, an ethnically mixed suburb consisting of some 2,000 Bosniak and 1,000 Croat households. People there are very proud of the fact that there has never been trouble among them, even in the hardest of times.

As Alijagic and I drove along the long straight road through the well-decorated homes and courtyards of Baksais, he proudly showed me the place where he was born and where he has spent his whole life.

Every now and then we stopped so that he could say hello and chat to people walking along the road.

“It’s the custom here to talk to your neighbours, inquire about their health and ask if they need any help with anything,” he said as we started off again. “The Bosniaks and Croats in Baksais kept to that custom during the war, too. We shared what little we had and solved our problems together.”

Suddenly, we stopped in front of a newly-built Catholic church. An elderly Croat man called Jandro Curic was waiting for us, and exchanged warm greetings with Alijagic.

This church was built only four years ago. People in Bihac say it was Bosniaks, whose 100-year-old mosque is located only a few hundred metres down the road in Baksais, who persuaded Croats to build the church so that their neighbours would have a place to pray, too. They helped with its construction and gave donations to fund the church.

"God's houses are good for all people, no matter what their ethnicity is," a smiling Alijagic said when we asked him about this.

He did all the timbering for the church free of charge.

"I own a sawmill and lumberyard, so it was only natural I should help,” he explained self-effacingly.

As Curic proudly showed off the church, he described how when it was being built, all the local residents – regardless of ethnicity – would come and bring food and money, or just help out.

Osman Muslic, a Bosniak in his late sixties who works as a butcher, and who also helped build the church, joined Alijagic and Curic to explain how it was that this particular community managed to preserve harmonious relationships even during the war, when in other parts of the country neighbours were killing one another.

When war broke out in Bosnia in the spring of 1992, Alijagic joined the government’s Army of Bosnia and Hercegovina, ABiH. Many of his Croat neighbors, Curic among them, followed suit.

"You know, when the war started, we did not have an army, we had no weapons, nothing”, Curic said. “We established joint Bosniak-Croat units within the ABiH, slept next to each other, and shared everything.”

When the Croatian Defence Council or HVO was established later that year, some of the local Croats left the ABiH to join it, while others remained. Curic says this did not create frictions between the two armies.

“There were no hard feelings between us,” he said.

At the time, there were around 3,000 Serbs in Bihac, and they remained there after the war started. Some were in the ABiH, others in the HVO. According to Curic, there were no problems with them either, even though Bihac was besieged by the Bosnian Serb Army for the duration of the war.

Curic argues that keeping two armies and different ethnic groups on good terms was only possible because the people who held power in Bihac, among them his own brother, had the sense to seek solutions that would be acceptable to everyone.

Alijagic agreed, saying, “There were no secrets among us, no separate meetings in which only Croats or only Bosniaks participated. We would always sit round the same table and try to find solutions to our problems together.”

He himself never believed war would be possible, especially in this town.

“We all hoped that war could be avoided, but unfortunately that wasn’t to be. Yugoslavia was one of the most beautiful countries in Europe, and yet it fell apart. I still have a hard time accepting that,” he said.

Croat and Bosniak residents of Baksais say the secret to their resilience lies in their upbringing and the fact they have lived alongside one another for centuries and have always got along well.

"Upbringing is very important,” Alijagic said. “If my father or Jandro’s hadn’t taught us to respect our neighbours regardless of their ethnicity, we’d probably be different people today. But because they did that, the politics and events of the war didn’t alter us.”

"We had to help each other,” he continued. “Even when the conflict broke out between HVO and ABiH in other parts of Bosnia, we didn’t let that influence us. Osman [Muslic] would still give away meat to HVO soldiers from the Bihac area who were passing by his butcher’s shop on their way home from the front.

“Everybody envied us then, and they still envy us now. We were the first to establish a joint government after the war, one that included Bosniaks, Croats and Serbs.”

Alijagic said it took a conscious effort to maintain ethnic harmony during the war.

"Bosniaks are the majority population here and we could easily have done something bad to the Croats. But no one could make me harm Jandro or his family. And the Croats here felt the same way – they didn’t want to harm us Bosniaks. We were fighting together and defending ourselves, our families and our Bihac”, he said.

Muslic was reluctant to say much about the help he gave to other people during the war. But he too is very proud of the good relationships he has with all his neighbors, Bosniak and Croat alike.

"There hasn’t been a single [Bosniak or Croat] celebration or funeral in Baksais that I haven’t attended,” he said. “When I walk through Baksais, all I do is greet people. Even the youngest ones stop me on the street and ask me how I am,” he said.

People in the town celebrate all festivals together, including religious ones. Muslic usually contributes a roast lamb.

“We’ve always lived this way, and the war didn’t change that”, Alijagic said. “We have always lived from our work, and we’ve helped each other. That's how we were taught to live life. We are not influenced by politics or what goes on around us."

Curic described how sports clubs are thoroughly mixed as well.

“We’ve got a Croat football club called Sloga-Kralje, and 90 per cent of our players are Bosniaks. But nobody cares”, he said, laughing.

The state of the economy and the poverty affecting the whole of Bosnia, with Bihac no exception, is a continuing concern for everyone here. Many of the young people, including both of Jandro’s sons, have left in search of a better life.

As we chatted about life in Bihac, Alijagic told us about the riding club he owns and the horses he loves. He said he was happy to see that the children who came to the club were being brought up in the same spirit of tolerance and respect for other ethnic groups.

At the riding club, three 13-year-old girls from Baksais were sitting on a fence by a barn containing a dozen thoroughbred horses. They come here every day during the summer break to groom the horses and learn how to ride.

When we asked them how they felt about living in a community where the different ethnic groups got on well even through the war years, they gave shy smiles.

"We weren’t even born when the war began," one of them, a girl called Aldina, said. “But our parents are teaching us the same thing they learned from their parents – that we have to respect our neighbours, whatever their ethnicity.”

Bihac and the three men interviewed in this article can be seen in a film made by IWPR called The Friends.

Marija Arnautovic is a reporter for Radio Free Europe and IWPR in Sarajevo.

Balkans, Bosnia and Herzegovina
Connect with us