Colonel Mirko Trivic was part of the forces that captured Srebrenica in July 1995.

Colonel Mirko Trivic was part of the forces that captured Srebrenica in July 1995. 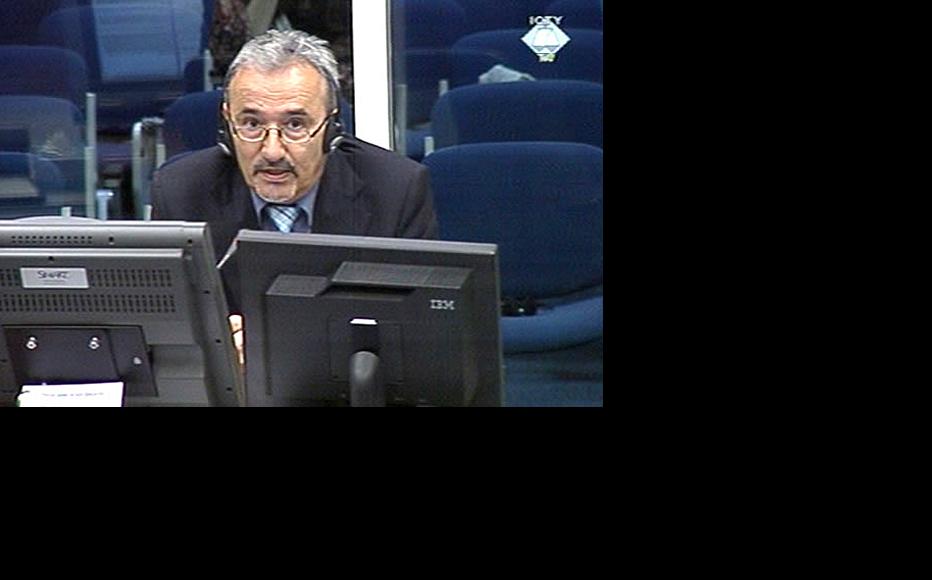 Mirko Trivic appeared as a prosecution witness in the trial of Ratko Mladic. (Photo: ICTY)
The link has been copied

A former colonel in the Bosnian Serb army testified this week that he had no recollection of being ordered to make life intolerable for the Bosnian Muslim residents of the eastern enclaves of Srebrenica and Zepa in 1995.

Colonel Mirko Trivic appeared as a prosecution witness in the trial of Ratko Mladic, wartime commander of the Bosnian Serb army.

Trivic was chief of staff of the Romanija Brigade, part of the Drina Corps of the Bosnian Serb army. He took part in the takeover of Srebrenica, and was shown on video footage entering the fallen town with Mladic and other officers on July 11, 1995.

In the days that followed, more than 7,000 Bosnian Muslim men and boys were killed by Bosnian Serb soldiers at various sites in the surrounding area. Mladic, who commanded the army, faces genocide charges in relation to the massacre.

During the prosecution’s examination, lawyer Peter McCloskey asked the witness about “Directive 7”, issued by Bosnian Serb president Radovan Karadzic on March 8, 1995. The document ordered Bosnian Serb army personnel to “create an unbearable situation of total insecurity, with no hope of further survival or life for the inhabitants of Srebrenica and Zepa”.

Trivic said he did not personally receive Directive 7.

McCloskey asked whether the witness received any other document containing the same order.

“After all these years, if something like that did arrive or did not arrive, I don’t want to speculate,” Trivic said.

“But these are amazing words – ‘make life unbearable’ for the people. Certainly you’d remember those words if they were given to you by your superiors,” McCloskey said. “Yes or no – do you remember or not?”

“I assume I would remember; these are very grave words,” the witness said. “I assume if they had been put that way, I would have remembered. But here, in the context of this directive, they do not have that meaning.”

McCloskey then presented a document dated March 20, 1995, which he said was issued by the commander of the Drina Corps to “the command of all brigades, including yours, for defence and active combat operations”.

The lawyer read from this document, which quoted directly from Directive 7, “By planned and well thought-out combat operations, create an unbearable situation of total insecurity with no hope of further survival or life for inhabitants of Srebrenica and Zepa.”

“These ‘grave words’ were directed to you – do you now recall them?” McCloskey asked.

“I remember that we discussed this in some situation,” Trivic replied.

“Do you now remember receiving these words in this document? Simple question – yes or no,” McCloskey said.

“Colonel, are you saying that when you get an order from your commander that you don’t read the complete order? So you don’t know what your neighbours are up to?” McCloskey asked.

“No… I just say it wasn’t my task and I don’t remember. As for these words, this did not pertain to my unit at all. I did not have positions vis-a-vis Srebrenica and Zepa, and that is why I attached less importance to this part of the order for active combat,” the witness maintained.

During the cross-examination, Mladic’s defence lawyer Branko Lukic focused on orders issued to the Drina Corps on July 13 to attack the nearby Zepa enclave.

Defence lawyer Lukic noted that the July 13 order stated that “the civilian Muslims and UNPROFOR [UN peacekeepers] are not targets of our operations. Collect them together and keep them under guard.”

“Does this order mean that UNPROFOR and civilians should be taken prisoner, or does it mean that they should be given protection? How do you understand this document?” asked Lukic.

“My understanding is that this is very clear – collect them, provide them with protection,” the witness said.

“The language here uses the verb ‘collect’ and that has nothing to do with taking prisoner. Secure is protection, quite simply,” Trivic said.

Judge Christoph Flugge then asked the witness how he understood the term “collect them together”, and how this was meant to happen.

“That means that they should be kept in a certain area. They should be enabled to stay in a certain area which had a guard service… so soldiers cannot approach them, and they cannot leave either until a report is sent to superiors…. It doesn’t have to be a building, it can be an open area,” Trivic said.