Witness denies knowledge of plans for and implementation of mass killings.

Witness denies knowledge of plans for and implementation of mass killings. 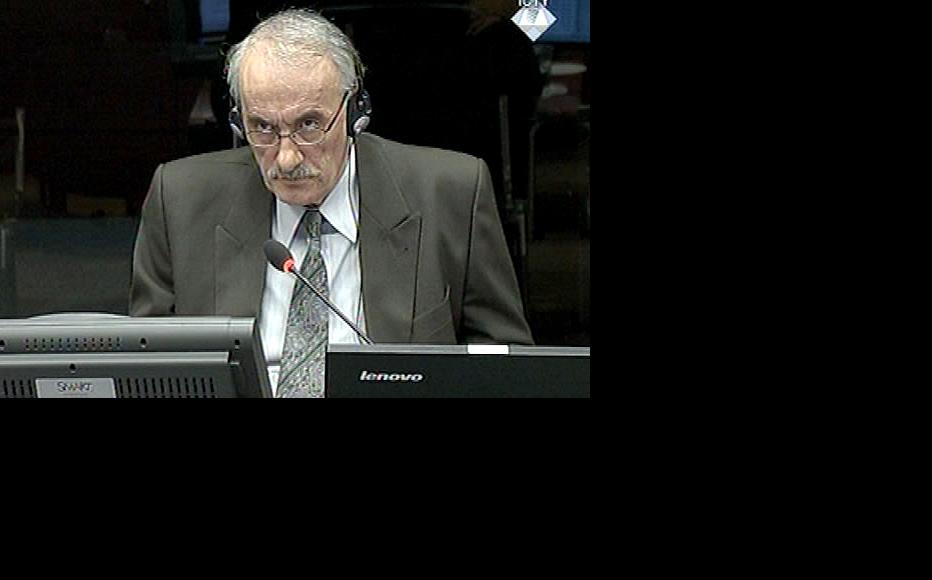 Vidoje Blagojevic, defence witness in the Mladic trial at the ICTY. (Photo: ICTY)
The link has been copied

A former Bosnian Serb army officer told the trial of Ratko Mladic this week that he was unaware of crimes committed by soldiers in his area of responsibility in the Srebrenica enclave during July 1995.

Defence witness Vidoje Blagojevic, the former commander of the Bosnian Serb army’s Bratunac Brigade, was sentenced to 15 years in prison by the Hague tribunal for his role in the Srebrenica massacre of July 1995. He served out two-thirds of his sentence in Norway and was released in 2013.

Mladic is accused of genocide and other crimes relating to the events in the eastern Bosnian town of Srebrenica, which was declared a “safe area” in 1993 and a United Nations peacekeeping battalion assigned to protect it. Despite its special status, the Srebrenica enclave was seized by Bosnian Serb forces on July 11. In the days that followed, more than 7,000 Bosniak men and boys were murdered by Bosnian Serb forces.

At the beginning of his testimony, defence lawyer Branko Lukic read out a summary of the witness’s statement concerning events in July 1995 around Srebrenica.

“Colonel Blagojevic… never received or gave any order for illegal activities and was not aware of any crimes in connection with these combat activities,” he read. “Colonel Blagojevic was unaware of any plan to execute prisoners from Srebrenica. He states that the claim of Momir Nikolic that on the evening of July 12, 1995, Nikolic informed Blagojevic of the plan to execute prisoners is not true.”

Nikolic, a former Bosnian Serb army officer, himself pleaded guilty to crimes in Srebrenica in 2003. In 2006, the Hague tribunal sentenced him to 20 years, a sentence he is serving in Finland.

“Colonel Blagojevic did not see Momir Nikolic on the evening of July 12,” Lukic said. “During the Srebrenica operation combat activities, nowhere and in no manner did the Bratunac Brigade command provide anyone with any illegal support and assistance that would be aimed against the lives of prisoners from the Srebrenica enclave. No such thing was ever ordered or requested from him and the Bratunac Brigade by any of his superiors.”

Prosecuting lawyer Abeer Hasan began her cross-examination by noting that the witness had been found guilty at The Hague for a number of crimes against humanity, and asked him whether he took responsibility for them.

“Let me tell you straight away, that was an illegal decision of this tribunal, unfortunately,” replied Blagojevic, stressing that he was not responsible for the crimes of which he was convicted.

Hasan went on to show the witness a number of documents from May 25, 1995, the day Blagojevic took command of the Bratunac Brigade. These included orders to shell the Srebrenica enclave that same evening.

The prosecutor noted that shortly after seven in the evening, the centre of Tuzla was shelled, resulting in the deaths of 66 young people.

“I’m not aware of that,” Blagojevic said. “I did not know about it then. I don’t know.”

“Well, this was the first date you took office as Bratunac Brigade commander and it was also Youth Day, celebrated in the region, so you don’t recall a massive shelling of the centre of Tuzla with scores of casualties,” she continued. “You’re unaware of that event?”

Blagojevic said he was unaware of it.

The witness continued to contest evidence that pointed to him knowing about crimes committed in his area of responsibility.

“Mr Blagojevic, your superiors in July 1995 entrusted you with commanding various units including units of the MUP [Bosnian Serb interior ministry] main staff units in a phase of the search operation that took place after the fall of Srebrenica and before you were deployed to Zepa. Isn’t that right?” Hasan asked.

“No,” the witness replied.

Hasan produced a document from the Drina Corps, of which the Bratunac Brigade was part. Dated July 15, 1995, this concerned the brigade’s activities in the Zepa area.

“The Bratunac Light Infantry Brigade is searching the terrain as ordered and is about to come out on the ordered line,” she read, going on to a proposal “that the first Bratunac Light Infantry commander be authorised and appointed as commander of all forces engaged in the search of terrain and clearing up the battleground east of Kasaba-Drinjaca road, because we do not have any one in the KDK [Drina Corps Command] whom we could assign to the task’. And in fact, Mr Blagojevic, this proposal was implemented, wasn’t it?”

“Not correct,” the witness replied.

“You would agree with me that KDK stands for the command of the Drina Corps?” the prosecutor asked.

Hasan then turned to a daily combat report to the Drina Corps sent in Blagojevic’s name on July 16, which stated that “during the day the brigade commander visited all units which are blocking the enemy retreat”.

“This is a supposition,” the witness said.

“Mr Blagojevic, I think my question was quite clear,” Hasan said. “This report in your name provides that you went and visited all these units and that you tasked them and organised their joint action. That’s accurate, isn’t it? That’s what you did.”

“I already told you, this is a supposition, this did not happen,” the witness said. “It was written but it did not happen in practice.”

Judge Christoph Flügge and presiding Judge Alphons Orie both went on to ask the witness whether he had lied to his superior command in this report.

The witness said the events described had not taken place, although he continued to describe this as “supposition” rather than a lie.

Later, Hasan turned to records of a command staff meeting the witness attended on October 16, 1995, and at which Nikolic reported that the Bratunac Brigade was currently engaged in “hygiene and sanitation" measures.

“To tell you the truth, I don’t seem to remember,” the witness said, adding that “sanitisation” was a normal part of combat operations.

“Mr Blagojevic, you knew that that was the name of the reburial operation that was taking place in the Bratunac area where bodies were removed from existing graves, taken through Bratunac town, past your command, past your apartment, and buried elsewhere. You knew that, didn’t you,” Hasan asked. “That couldn’t have escaped you.”

Blagojevic said he had not known this. Asked whether he knew about “the reburial of hundreds and hundreds of bodies to conceal the crimes that had been committed,” he answered, “I cannot speak to you about that because I don’t have any facts available.”

Later, Hasan provided the witness with an official Bratunac Brigade map of the area and asked him to mark out the unit’s zone of responsibility on it.

Blagojevic said he was unable to do so, despite interventions by both Judge Orie and Judge Flügge asking him to follow Hasan’s instructions.

“You were the commander. You surely know where those borders are,” Hasan said.

The witness eventually said it was “impossible” to mark out the zone of responsibility, claiming that he could not “decipher the name of a single village.

“You should bear in mind I have a bad eye. I can barely see with one eye,” he added.

The prosecution stated its position that the witness was refusing to mark the map.

“The reason in fact that you are refusing to mark the area of responsibility on this map is because you don’t want any responsibility for what took place within that area in July 1995,” Hasan said. “That’s correct.”

“God forbid,” Blagojevic replied. “This has nothing to do with the truth, this is nonsense. I am just speaking about facts.”