Bosniak Soldiers "Killed Each Other" at Srebrenica, Witness Claims

Former officer in Serb military alleges that those who refused to surrender were killed by their own side.

Bosniak Soldiers "Killed Each Other" at Srebrenica, Witness Claims

Former officer in Serb military alleges that those who refused to surrender were killed by their own side. 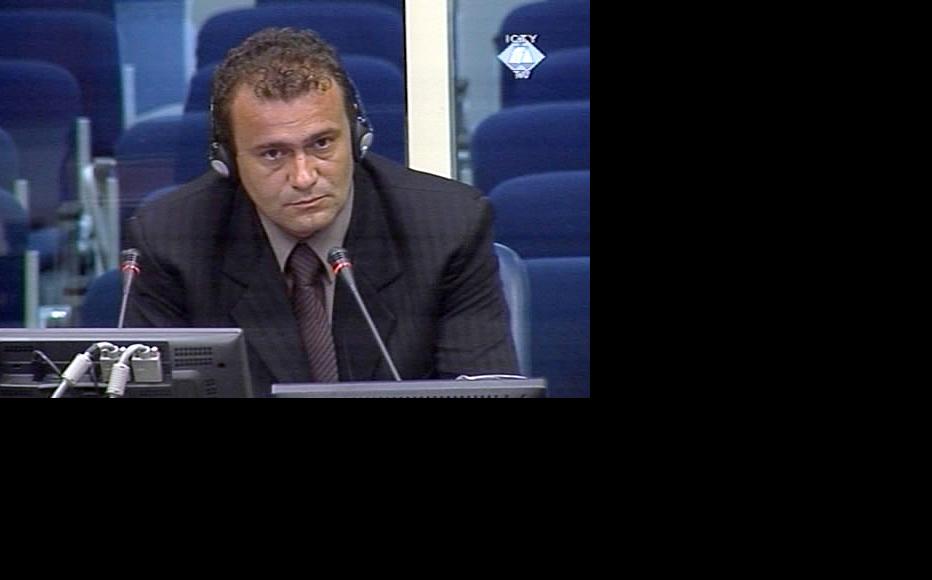 Bojan Subotic, defence witness in the Mladic trial at the ICTY. (Photo: ICTY)
The link has been copied

A defence witness in the trial of Ratko Mladic described the "horrible sight” of hundreds of dead Bosniaks who he claimed were killed by their own officers in the Srebrenica enclave.

Mladic is accused of genocide and other crimes relating to the killing of more than 7,000 Bosniak (Bosnian Muslim) men and boys by troops under his command in the days that followed the capture of what had been designated a “safe area” by the United Nations.

On July 13, Subotic was in command of a military police station at nearby Nova Kasaba.

Defence lawyer Dragan Ivetic began by reading out a summary of the witness’s statement, in which he described how at about seven that morning, “a woman came to them to say that her house and the area around the house was full of Muslim soldiers. He went to check, with one other soldier, and they came under ambush and fire from the Muslims and had to call a BOV armoured vehicle to withdraw. In his estimate there were 1,000 enemy soldiers with dozens of machine guns.”

Subotic and his men continued in the vehicle as far as Konjevic Polje, hearing “intense fire from machine gun and mortars” coming from that direction. After crossing the bridge in Nova Kasaba, they came under fire again and Subotic ordered tear gas canisters to be fired into the woods to create a smokescreen and repel the attackers.

“Muslim soldiers surrendered to him and told of how there was infighting on their side between those that had wanted to surrender and the Muslim commanders who did not let them surrender and who were killing those who wanted to give themselves up,” Ivetic continued.

Subotic used the vehicle’s loudspeaker to call upon other Bosniaks to surrender, and more fighters emerged from the woods, including three who were wounded. He radioed his command post and asked for an ambulance and for back-up as the shooting was still intense.

“The witness eventually went into the woods with the Muslims and saw a horrible sight of over 500 dead people,” Ivetic continued, describing how they took the Bosniak prisoners to the Nova Kasaba football stadium, where Subotic brought them all the food he had at his base.

“At one point General Mladic came and spoke to the men,” Ivetic said. “He told them that everyone would be housed and fed and exchanged for Serb prisoners. He ordered that they be secured and safely transported to Bratunac, where the civilian authorities would take them over.”

The prisoners responded to this with applause, the defence continued.

According to his statement, Subotic then escorted a column of buses filled with prisoners to the Vuk Karadzic school in Bratunac, where he turned them over to civilian police.

Prosecuting lawyer Abeer Hasan began her cross-examination by reading from an intercepted communication timed 10.09 am on July 13.

One of the people recorded was named as Beara, a reference to Ljubisa Beara, the then chief of security for the main staff of the Bosnian Serb army. In 2010, he was found guilty of genocide and sentenced to life in prison.

The man he was talking to was named as “Zoca”.

“Our position is that Zoca is [Subotic’s commanding officer, Zoran] Malinic,” Hasan said.

“Zoca says, ‘well here it is, they’re killing themselves, there are also plenty of wounded’...and Beara says, ‘you mean they’re doing it among themselves... well, excellent, just let them continue, fuck it’,” she read.

“I don’t see that this is Malinic. Zoca could be whoever,” the witness said.

Hasan noted that Malinic had testified at the Hague tribunal that he spoke to Beara at about 10.15 am on July 13. She asked the witness whether the conversation accurately reflected information given in his own testimony.

Subotic described it as perhaps a “coincidence”.

Moving on, Hasan turned to events later that day at the Nova Kasaba stadium, specifically an incident in which a Muslim prisoner was shot dead.

She read an excerpt from the testimony Malinic gave for the trial of wartime Bosnian Serb general Zdravko Tolimir.

In 2012, Tolimir was convicted of genocide for his role in the Srebrenica massacre and sentenced to life in prison.

“As for killings, the killing of one prisoner, this is something I heard of and it did happen at the stadium, when the prisoner attacked a soldier who was a member of the military police battalion,” she read, adding that Malinic testified that it had been a “question of self defence”.

“Malinic heard about a prisoner being shot, relating to an incident involving a member of your police unit. You must have heard of this, sir, or seen it yourself, isn’t that the truth?” she asked Subotic. “You were amongst those military policemen at the field. Or do you claim that Major Malinic was not telling the truth?”

“Not for a single moment did I say Major Malinic was not telling the truth,” the witness replied, adding that this was the first time he had heard a military policeman was attacked. He also noted that Malinic had not been an eyewitness to the attack he described.

Hasan then turned to a part of Subotic’s statement which referred to the presence of media teams at the stadium, including the official Bosnian Serb news agency Srna. Subotic himself was interviewed by film crews.

The prosecutor asked whether the witness had ever seen the footage of the prisoners at Nova Kasaba or of his own interview.

Subotic said that he had never seen the recording, although he had asked friends who worked in the media to go through the archives and find it for him.

“We in our investigations have been looking for this footage for many, many years and have never found a trace of it,” Hasan continued, asking whether the witness knew what had happened to it.

“Really, I don’t know, I would also like to have it found, that interview of mine,” he replied.

Subotic had then escorted the prisoner convoy to Bratunac, and he described hearing gunfire along the entire route.

“When you arrived at the Vuk Karadzic school, now in your statement you talk about handing over the prisoners to civilian police,” Hasan continued, noting that he had not mentioned the presence of other military policemen.

Subotic said he had seen military police at the checkpoint into the town and in the town itself, but not by the school.

“You don’t deny, do you, that the military police was involved in securing the Vuk Karadzic school?” she asked.

“I did not see them. Now who was securing the school, now that I don’t know,” he answered.

“And you’re aware that hundreds and hundreds of men who were detained in Bratunac on the night of July 13 were transported to schools in Zvornik, after which they were summarily executed. You’re aware of this, right?” Hasan asked.

“I don’t know when they were transferred and whether they were executed,” the witness said. “I heard and saw in the media that that was what happened, but I don’t have any personal knowledge of that.”