Children stay off school for months in dispute over language, history and other subjects.

Children stay off school for months in dispute over language, history and other subjects. 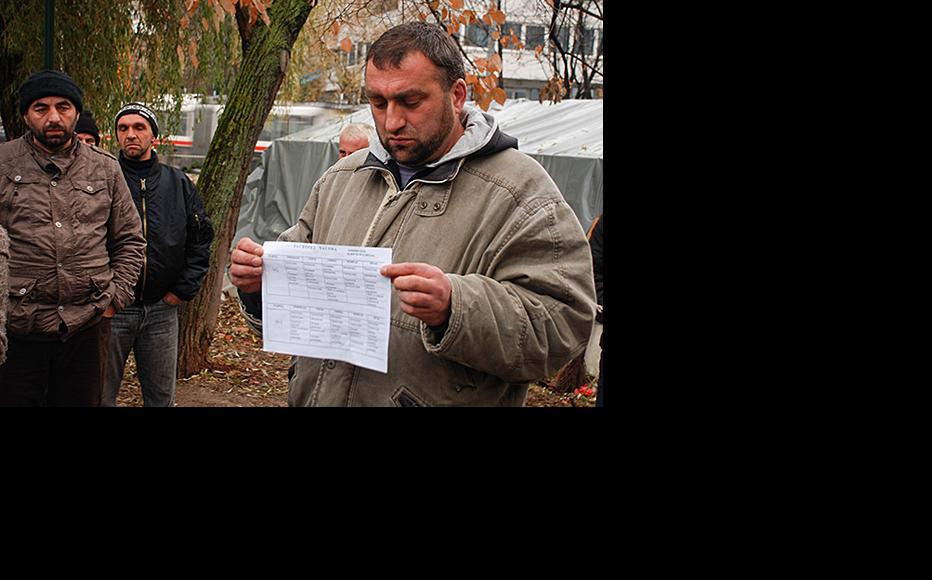 One of the protesting parents, Muhizin Omerovic, holds up a school timetable based on the Serb curriculum. (Photo: Ajdin Kamber) 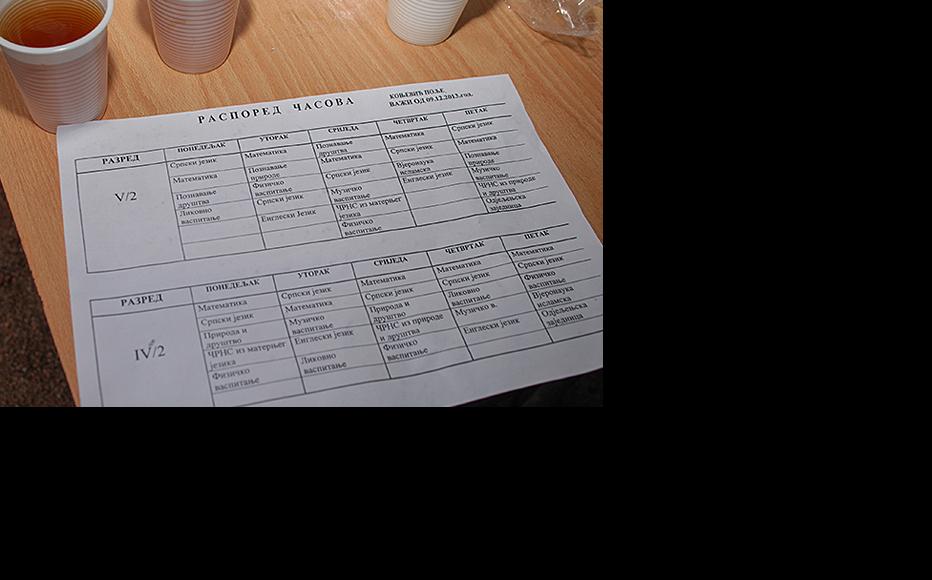 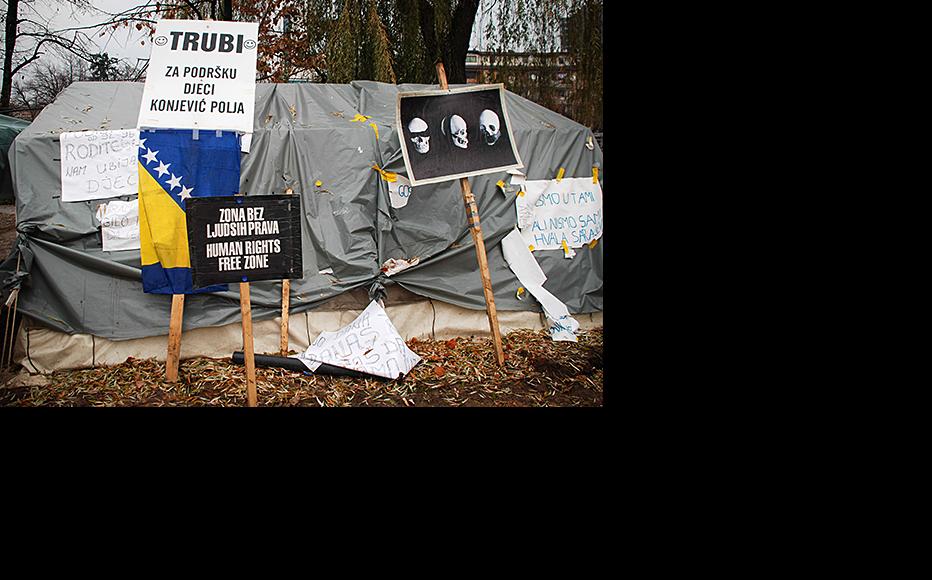 One of the banners urges drivers &amp;quot;Honk if you support the Konjevic Polje children&amp;quot;. (Photo: Ajdin Kamber) 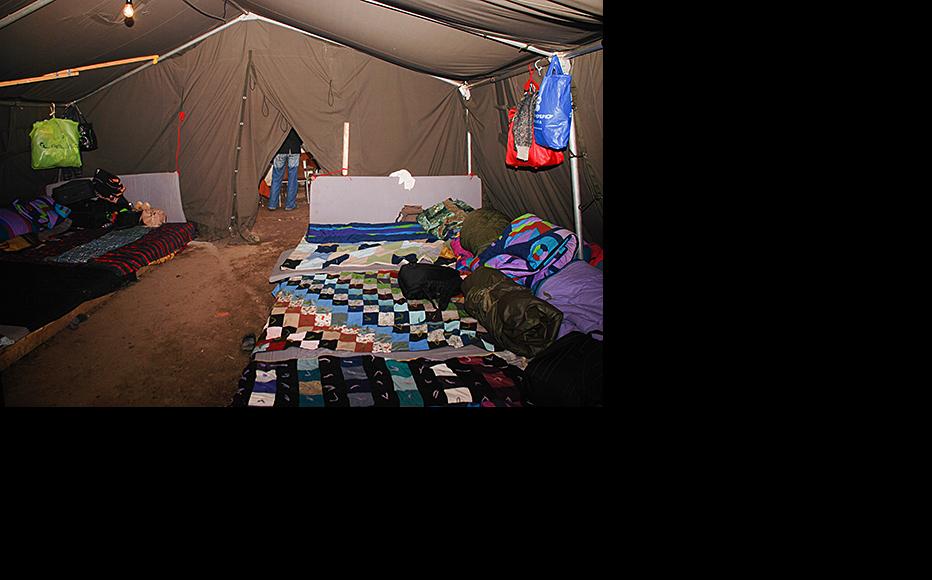 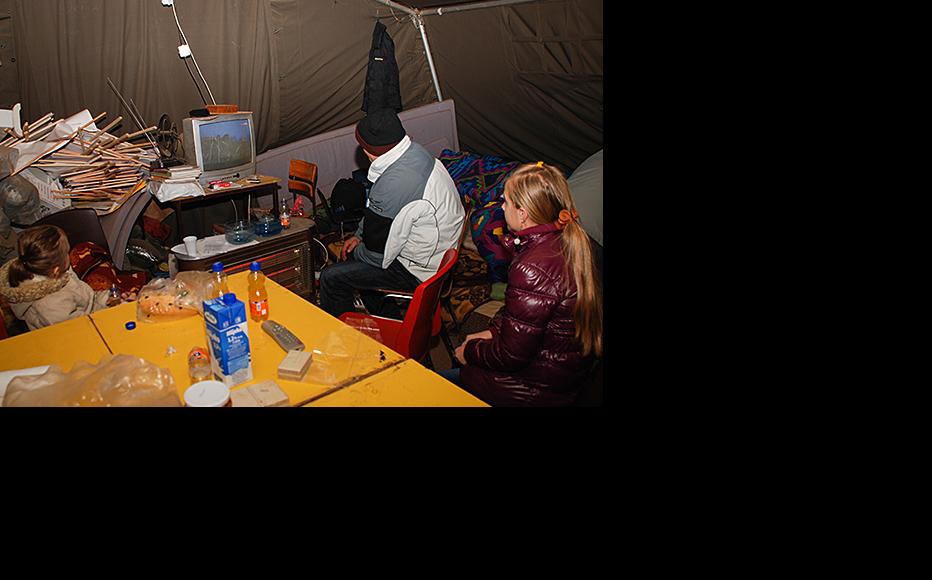 Life goes on in the tents. (Photo: Ajdin Kamber)
The link has been copied

A group of parents in Bosnia have ended a four-month sit-in to protest against their children being taught the Serb curriculum instead of the Bosniak one they are demanding.

They are Bosniaks (Bosnian Muslims) who returned to Konjevic Polje, a small town in Republika Srpska, after the conflict of the early 1990s. Republika Srpska is the smaller of Bosnia’s two administrative entities and is predominantly Serb.

Although all the children at the local school are Bosniak, they are forced to follow the Serb programme of study used elsewhere in Republika Srpska, RS.

Parents have tried in vain to convince the local authorities to change the syllabus. While there is provision for Bosniak, Serb and Croatian schooling across Bosnia, officials in RS say the Konjevic Polje school is not big enough to qualify for its own system.

Schools in Bosnia follow one of three different curricula – one in RS and two in the other entity, the Federation. Maths, chemistry and biology teaching is the same everywhere. The differences apply to a set of “national” subjects including language (Bosniak, Serbian or Croatian), literature, religion, history and geography.

In areas where a community from one group – Serb, Bosniak or Croat – is in the minority, schooling in the appropriate curriculum is supposed to be made available to it, under a 2002 agreement between the Federation and RS. That agreement was meant to be temporary but it has never been firmed up.

The Konjevic Polje parents have long argued that this provision should have been extended to their school. They are also upset about the school board of governors, on which Serbs form the majority.

At the start of the autumn term last year, the parents of 96 of the 140 pupils at the school took them out, claiming that they were suffering discrimination.

On October 9, they took their protest to Bosnia’s capital Sarajevo, where most of them spent the winter living in tents outside the Office of the High Representative, the international body in charge of overseeing implementation of the Dayton Peace Accords which ended the war.

The adults spent most nights under canvas, in sleeping bags on planks on the ground. When it got cold, the children were moved into a nearby hostel.

In RS, officials say they have done their best to reach a compromise with the parents.

According to the entity’s education minister, Goran Mutabdzija, only classes that have 18 or more pupils can follow a different curriculum from the main, Serb-oriented one.

This is not the case at the Konjevic Polje school, he says. There are between seven and 13 pupils per class, so none meets the minimum quota.

However, some education experts point out that the quota only appears in the 2002 temporary agreement, and is not mentioned in any education legislation that applies in either RS or the Federation. Hence the RS education authorities could allow the Konjevic Polje school to follow its own curriculum regardless of numbers, without this breaching any law.

When parents in Konjevic Polje began their campaign last year, it was more about facilities at the school, but it expanded to include other issues.

In February 2013, all the parents at the school signed a petition setting out a list of demands and threatening to withdraw their children at the start of the autumn term, which most subsequently did.

“Some of the requests had to do with sanitary and technical conditions, since the school didn’t have water last year and children had to use toilets in neighbouring houses,” Muhizin Omerovic, one of the parents, told IWPR. “There’s also the issue of the ‘national subjects group’, because our children, against their will and ours, are learning the Serbian language in school. We also asked for changes to the school council. Of the seven members, only one is Bosniak, and it’s impossible to change anything at that school.”

Merhunisa Zukic, from the Union for Sustainable Return and Integration, an organisation that defends the rights of returnees, said the Bosniaks in Konjevic Polje presented a clear case of discrimination.

“Current laws are not being applied, and international conventions which Bosnia and Herzegovina has signed are being violated,” she said. “The Union is calling on all relevant local institutions, international organisations, and the NGO sector to try to find systemic solutions the the many urgent problems that the children of returnees face in education.”

Zukic pointed out that schooling problems occurred in most areas where communities had returned and now formed minorities. As well as the curriculum, these problems included shortages of schools, teachers and teaching materials, buildings in a poor state of repair, and a lack of transport for pupils.

Konjevic Polje is not the only place in RS where the school curriculum is in dispute. In Vrbanjci, a small town near Kotor Varos in northwest Bosnia, more than half of the 280 children enrolled at the local school are Bosniak. But they are not allowed to study their own set of subjects. They too have boycotted school since last September.

Even though the tent protest in Sarajevo is over, the Konjevic Polje parents have vowed to continue campaigning.
In the meantime, the 96 children withdrawn from school since September have begun attending classes at an improvised school in the town of Nova Kasaba, some six kilometres away. They are following the Sarajevo canton curriculum, taught by 14 young volunteers from the Federation.

“This doesn’t mean we are giving up the fight,” said Omerovic. “On the contrary, we will pursue it until our demands are met.”

Balkans, Bosnia and Herzegovina
Education
Connect with us