Bosnia: "Enemy Combatants" Who Saved Each Other

How a Bosniak soldier found himself captor of a Serb who had helped him, and went the extra mile to return the favour.

Bosnia: "Enemy Combatants" Who Saved Each Other

How a Bosniak soldier found himself captor of a Serb who had helped him, and went the extra mile to return the favour. 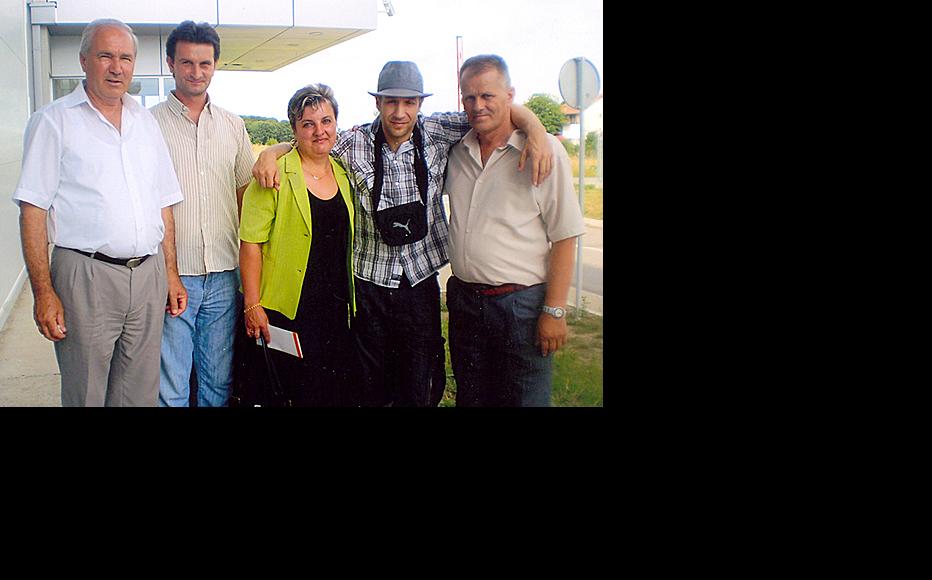 Hasan Jusovic (right) and Aco Nenadic (second from left). (Photo courtesy of Hasan Jusovic.)
The link has been copied

When a Yugoslav army convoy came under attack while withdrawing from Sarajevo in 1992, a Bosniak man risked his live to save a Serb soldier and help him get out of Bosnia.

On May 2, 1992, a day before the troop withdrawal, the Yugoslav People’s Army or JNA launched a failed attempt to occupy central Sarajevo, and seized Bosnia’s president Alija Izetbegovic at the airport as he returned from peace talks held in Lisbon.

On May 3, a deal was done under which Izetbegovic was to be released and a convoy of JNA forces would be allowed out of the city by the Bosnian Territorial Defence, TO, which was later to form the core of the Sarajevo government’s army.

However, the Bosnian government side decided that the JNA had broken the agreement by taking its arms and ammunition in the convoy. In what became known as the Dobrovoljacka Street attack, TO units assaulted the column in an attempt to seize these weapons.

Dozens of JNA soldiers were captured in the attack. Among them was Aco Nenadic, a 19-year-old from Serbia conscripted before the war in Bosnia began Sarajevo.

As TO soldiers were escorting him and others to a makeshift prison, he heard someone whisper in his ear, “Don’t be afraid; just keep quiet. As long as I’m here, you will stay alive.”

Nenadic recognised the speaker – it was Hasan Jusovic, a Bosniak from Sarajevo who had joined the TO. He had helped Jusovic desert from the JNA a month earlier.

In early 1992, Jusovic was staff car driver for JNA General Vojislav Djurdjevac. He got to know Nenadic as they were based in the same barracks.

“We got along well. We often had a coffee and a chat together, oblivious to the fact that a war was about to start,” Jusovic recalled.

“When the war in Bosnia broke out that spring, I decided to join the TO. I confided in Aco and told him I had to get away,” Jusovic continued. “He was very relaxed about it and said, ‘I know. I have to stay and you have to leave. Take care, and say hi to your family for me. I wish you all the best.’ On April 4, he saw me off as I escaped.”

A few days later, Nenadic tipped Jusovic off that the JNA military police were about to arrest him as a deserter. He advised Jusovic to move out of the apartment where he was living at the time. Jusovic acted on the warning seriously, and went to his family home in the old part of Sarajevo, which was predominantly Bosniak.

He never expected to see Nenadic again. However, on that day in May 1992, he spotted him among the other JNA soldiers captured in Dobrovoljacka Street. As he was approaching Nenadic, he heard shots and got worried that his friend might get hurt.

“I was very surprised to see Aco among the other captured soldiers. All I could think about was how I had to help him and return the favour. I remembered how he’d helped me escape from the JNA”, Jusovic said. “I wanted to keep Aco safe, so I walked beside him all the way to the prison, to make sure nothing happened to him.”

The JNA soldiers were taken to a sports hall in the city centre and held there. Jusovic asked one of the TO officers present there to let him take Nenadic away with him as he owed him a favour. The officer agreed to this, and soon they were back on the streets of Sarajevo again.

Nenadic was still in JNA uniform and it was too risky for him to be walking around dressed like that, so Jusovic knocked on the door of the nearest house and asked the owner to lend him some civilian clothes. As soon as Nenadic was out of uniform, they walked the two-and-a-half kilometres to Jusovic’s house in the old town.

Aware of the checkpoints set up across the city, Jusovic instructed Nenadic to give the Muslim name Mirsad if anyone asked him who he was.

“Hasan saw I was wearing a cross on a chain round my neck, so he took it off, put it in my hand and said, I’m sorry, but you should keep this in your pocket for a while,” Nenadic recalled. “It was hard to know who was fighting whom at the time and what might happen to me, so Hasan thought that the less suspicion we raised, the better. I agreed with him and we got to his home safely.”

For the next month, as fighting raged in the besieged city, Nenadic remained in Jusovic’s house. Jusovic’s family shared what little food they had with him and tried to keep him safe.

“Hasan and his family always waited for me to get up in the morning so that we could all drink coffee together. They fed me and took care of me,” Nenadic said. “Everybody showed me respect – the whole neighbourhood – even though it must have been very difficult for them to be hiding a Serbian soldier while Sarajevo was being shelled from Serb positions.”

The Jusovics’ house was located close to the Bosnian Serb army positions used to fire on the city’s civilian population.

Finally, Jusovic and his father arranged a deal with some friends to help Nenadic cross the front line and get to Serb-held territory, only a few hundred metres away from their house.

They watched as he made his way up the hillside and approached the Serb positions. They were afraid someone would open fire on him, but that did not happen.

Nenadic telephoned them soon afterwards to confirm that he was alive and well. Then he went back to his family in Belgrade.

It was only later that Jusovic found out that all the JNA soldiers detained with Nenadic were freed a few days after their capture.

“As things turned out, they were all released after just a few days, while Aco spent a whole month in my house. He had the toughest time of all of them,” Jusovic said, laughing.

After Nenadic returned to Belgrade, he and Jusovic lost touch and heard no news of each other for years.

In 2009, with the help of a Belgrade production company making a TV show called “All for Love”, they met up in Sarajevo, outside the army barracks where they had served together before the war.

Jusovic says they were both overcome with emotion – they hugged and cried for a long time.

They still see one another from time to time, whenever they get a chance.

These days, Jusovic is a taxi driver in Sarajevo. In his car he has a small album with photos of people he is particularly fond of, and Nenadic is among them.

Balkans, Serbia, Bosnia and Herzegovina
Conflict resolution
Connect with us