Membership of economic grouping risks distancing Kyrgyzstan from some of its near neighbours.

Membership of economic grouping risks distancing Kyrgyzstan from some of its near neighbours. 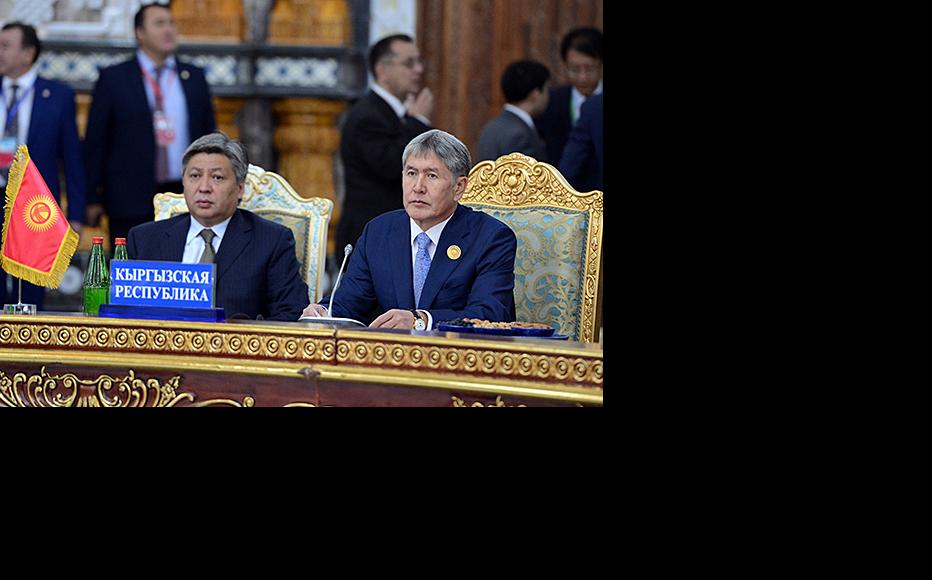 President Almazbek Atambaev (right) and Foreign Minister Erlan Abdyldaev of Kyrgyzstan at a recent summit with the leaders of Russia, China, Kazakstan, Tajikistan and Uzbekistan. (Photo: Kyrgyz president’s website)
The link has been copied

Experts in Kyrgyzstan are warning that the authorities should not let imminent accession to the Moscow-led Customs Union overshadow relations with its neighbours, despite its sometimes difficult relationships with them.

Border disputes have upset ties between Kyrgyzstan and Tajikistan, while energy supplies from Uzbekistan have been disrupted by a row over the Tajiks’ construction of a giant dam.

Kyrgyz president Almazbek Atambaev has made clear he believes that joining Belarus, Kazakstan and Russia in the Customs Union will reduce his country’s dependence on its neighbours. But analysts say that however frustrated the Kyrgyz government might be with Uzbekistan and Tajikistan, it would be short-sighted to try to use Customs Union to turn away from them.

Kyrgyzstan’s accession to the trade bloc now appears to be close. Andrei Belyaninov, the head of the Russian customs service, travelled to Kyrgyzstan to meet Prime Minister Joomart Otorbaev on September 10. As well as the Customs Union, they discussed the implementation of energy projects led by Russian energy giant Gazprom, which now owns the former state gas company Kyrgyzgaz.

Belyaninov’s trip followed a Moscow summit between Russian foreign minister Sergei Lavrov and his Kyrgyz counterpart Erlan Abdyldaev on 4 September, during which they signed a programme of cooperation for the next year.

At a press conference after the meeting, Lavrov said the process of Kyrgyz accession was now “being speeded up”.

The accelerated pace has been made possible by Moscow agreeing to a financial assistance package, a decision made at a Customs Union summit in the Kazak capital Astana on May 29. The bloc’s existing members also formalised the establishment of the new Eurasian Economic Union that will should take them to a new level of integration. (See Kyrgyzstan Gets Soft Terms for Customs Union Entry on this.)

The Russian government’s move was no doubt driven by its worsening relations with the West and its attempts to shore up support among former Soviet republics.

Meanwhile, Atambaev has made clear he sees “no alternative” to accession.

He used an Independence Day speech on August 31 to emphasise the benefits of joining the union, while at the same time expressing frustration with the Kyrgyzstan’s neighbours.

Atambaev vowed that Kyrgyzstan would complete the giant Kambarata hydroelectric scheme to which Uzbekistan – reliant on the Amu Darya river downstream of the dam – objects because it fears the water flow will be restricted. (See Russia Factor Shifts Kyrgyz-Uzbek Power Balance on relations between the two states.)

Bishkek’s refusal to halt construction of the dam was seen as the reason for Tashkent’s decision to cut off gas suppliers to Kyrgyzstan’s southern provinces this spring.

Atambaev also referred to the construction of a road to bypass a Tajik enclave in southern Kyrgyzstan, an issue which has strained relations with Tajikistan. For the last two years, the border between the two countries has been shut by repeated skirmishes over the issue. This year, there have been three major incidents, with both sides suffering casualties. (The issues are examined in Communities Struggle to Overcome Kyrgyz-Tajik Border Tensions.)

“Year after year, officials from this country used to beg neighbours to supply gas, to open the highway… or railway for our freight to transit,” Atambaev said, arguing that Russian investment would allow Kyrgyzstan to break out.

By contrast, he noted, Russia and Kazakstan did not threaten Kyrgyzstan’s energy supplies, borders or territorial integrity.

The president urged the Kyrgyz parliament to ratify the membership document and expressed hope that the country could join by next January.

“We’ve recently seen the traditionally good relationship between Kyrgyzstan and Tajikistan deteriorating,” she noted, adding that maintaining good relations with these neighbours was vital to the national interest.

Kyrgyzstan’s location, sharing borders with four countries, has made it attractive to regional players such as Russia and China, a major Central Asian investor and trading partner.

Esengulova emphasised that Russia, China and the United States were not interested in dealing with Kyrgyzstan in isolation.

“Russia needs a stable Central Asia where it will feel at ease and able to work with everyone,” she said, adding that this was why Moscow wanted to see Kyrgyzstan on good terms with its neighbours.

Emil Juraev, a politics lecturer at the American University in Bishkek, said it was important for Kyrgyzstan not to make the mistake of overplaying the leverage it would gain by entering the Moscow-dominated trade bloc.

He said Bishkek appeared to be flaunting its closer ties with Moscow to make political statements about its neighbours, as if implying that it had Russia’s backing.

“This is starting to cast a shadow on ties with Tashkent and Dushanbe, particularly with the former,” Juraev said.

The problem, he said, was that Moscow would only throw its weight behind Bishkek when it suited its own interests. Russia was unlikely to support Kyrgyzstan at the cost of its relationships with Tajikistan and Uzbekistan.

“Unfortunately, our government hasn’t recently been showing that it understand Kyrgyzstan needs to build relationships with its own neighbours on his own terms,” he concluded.

Bishkek-based analyst Sheradil Baktygulov agreed that accession to the Customs Union would not automatically translate into a guarantee of political support.

“The members themselves emphasise that it is first and foremost an economic union,” Baktygulov said. “The Kyrgyz authorities won’t be able to play on their ties with Moscow because Moscow’s [links] with Dushanbe are as close as its relations with Bishkek.”

Uzbekistan, for its part, is wary of regional blocs dominated by Russia, whether political, economic or security-related, Juraev said.

“It reacts jealously to the presence of such unions in its vicinity. This is Uzbekistan’s general approach to its foreign policy,” he added. Rhetoric such as Atambaev used in his recent speech might only serve to antagonise Tashkent.

As a Customs Union member, Kyrgyzstan will be expected to impose higher import tariffs on non-member. In reality, though, experts doubt the impact will be felt immediately.

Baktygulov said frontiers were ill-defined and porous, with officials on all sides complicit in smuggling goods.

“Even now, most trade in border areas is based around smuggling, so until the border is tightened up, none of the trade barriers will work,” he said.

The authorities have tried to downplay this issue, with Iskenderbek Mambetaliev, first deputy head of the Kyrgyz border service, telling media on September13 that border control issues would have no effect on Kyrgyzstan’s accession.

Other experts note that in any case, Kyrgyzstan’s neighbours are not among its top five trading partners. According to last year’s official figures, Uzbekistan lagged behind Turkey in sixth place and Tajikistan was placed even lower.

However, Juraev said, trade with Tajikistan might improve as it has expressed an interest in joining the Customs Union.

“It will most probably get preferential treatment for trade with Custom Union members. As for Uzbekistan, an increase in trade is unlikely…. We have limited economic ties,” he added.

Timur Toktonaliev is an IWPR contributor in Kyrgyzstan.